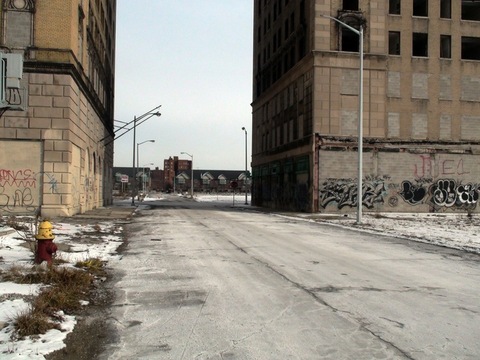 Tuesday’s release of the 2010 census data showed a dramatic decline in Detroit’s population. Over the past 10 years, the city lost a quarter of its residents, bringing it down to a size similar to the pre-auto boom numbers of 1910. In fact, Michigan’s was the only state population to decline between 2000 and 2010.

Sarah Hulett, a reporter from Michigan Radio who covers Detroit, said that while many were expecting a drop in population, “what is a surprise, I think to a lot of people, is just how steep the drop has been.” The current emigration rate means one person left the city every 22 minutes between 2000 and 2010.

Detroit Mayor Dave Bing said in a press conference Tuesday that he plans to challenge the census numbers. He believes that the official number of 713,777 is off by at least 40,000. Proving that the city has over 750,000 residents would mean avoiding significant funding cuts.

Hulett explained that the city plans to find the extra 40,000 people by using “building permit information to find addressess for people and go knock on doors.”

The city has already implemented a couple programs to combat population decline. Live Midtown is one notable re-urbanization effort. The project provides financial incentives in the form of loans and rent allowances to employees and students tied to Wayne State University, the Henry Ford Health System, and the Detroit Medical Center who choose to live in Midtown Detroit.

But Hulett says it’s too early to tell what the result of this and other re-urbanization projects will be, and many are still focused on stopping the urban emigration, rather than revitalization.

“There are people who talk about rebuilding Detroit and getting people to move back in the city and what [the mayor] is saying is that we have to stop the hemorrhaging.”

For more on Detroit, read our cross-post from Micki Maynard at Changing Gears, a public media project examining the industrial Midwest.