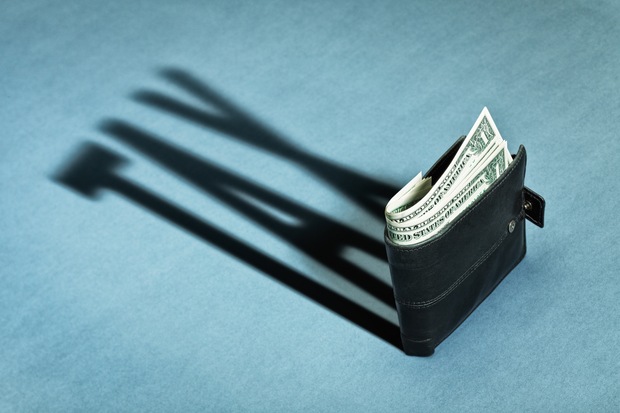 The correlation between states having no income tax and their economic growth is not as direct as Reagan White House economic adviser Arthur Laffer says it is, argues tax economist Joel Slemrod. Photo courtesy of Jon Boyes/Getty Images.

Paul Solman: In February, I was pointed to a study by the Institute on Taxation and Economic Policy that began:

“Lawmakers in about a dozen states are giving serious consideration to either cutting or eliminating their state personal income taxes. In each case, these proposals are being touted as a way to boost economic growth.

“One claim often made during these debates is that the nine states without personal income taxes are outperforming the rest of the country, and that their growth can be easily replicated in any state that dares to abandon its income tax. Some have also claimed that the nine states with the highest top income tax rates are experiencing below-average growth. The governors of Indiana, Oklahoma, and South Carolina, as well as high-ranking officials pushing for income tax repeal in Louisiana and North Carolina, are just some of the more influential lawmakers that have attempted to frame the debate in this way.

But these talking points, which have been widely disseminated by the American Legislative Exchange Council (ALEC), Americans for Prosperity, and The Wall Street Journal’s editorial board, are based on an analysis by supply-side economist Arthur Laffer that is extremely flawed.”

But the study seemed a persuasive piece of work, so I interviewed former Reagan White House economic adviser Arthur Laffer about the study and his work in general, including the inflection point of his famous “Laffer Curve,” which we featured on the Business Desk Thursday.

But since the research had been sent to me under the heading “Contra Laffer,” I wanted a more impartial point of view. So I sent both the research and my interview with Laffer to the distinguished University of Michigan tax economist Joel Slemrod for a response. Here it is:

Joel Slemrod: I’ve never had the chance to meet with Dr. Laffer, but his work has been a presence throughout my professional career. I was in graduate school at Harvard just when the Laffer Curve was at its hottest, and my adviser Martin Feldstein was at the front lines of the debate about the effect of taxation on the economy.

How Low Can They Go? In Defense of Slashing State Income Taxes

On some basic points, Laffer and I are in complete agreement: taxes can affect the decisions of individuals and firms on a wide variety of margins, and these potential behavioral responses should be considered in formulating policy. As Laffer says in his interview with Paul, the issue really is not whether taxes can affect behavior — in 2013, this is indisputable. The issue is how big the effect is and what its policy consequences are.

As of the late 1970s, though, there was much resistance to this idea. I distinctly recall Feldstein’s reaction in the classroom to some of this evidence. He said, “When you ask business leaders to rank the top 10 factors in a business location decision, taxes often come out near the bottom of the list. But if you ask CEOs whether they make decisions based on pre-tax values or after-tax values, they look at you like you’re crazy and say ‘after-tax, of course.'”

Paul’s interview begins with Laffer offering himself and his family as a data point for the proposition that taxes, in this case, state income taxes, matter. He claims his family moved from California to Tennessee exclusively because of taxes; they would not have moved unless Tennessee had zero income tax. Of course, budgets being what they are, the lack of an income tax has other implications — something has to give.

In Tennessee’s case, one thing that gives is that it has the highest combined state and local retail sales tax rate in the United States: 9.45 percent, according to the Tax Foundation. That the sales tax rate in Tennessee did not figure prominently in the Laffer residence’s decision to move suggests something about the family’s projected mix of income and consumption, and many others would undoubtedly weight the sales tax rate relatively more than he does. (He doesn’t even mention it.)

Another thing that might have to give is the level of public spending: other things equal, as we economists like to say, collecting no income tax revenue means the government has less to spend on services that most citizens value, such as education, health care and infrastructure. But in his interview, Laffer makes clear that this doesn’t bother him because, he believes, more money does not provide better public services. This is a controversial statement that he backs with a few anecdotes, but it is not one that is widely held, the possibility of greater public-sector efficiency (getting better public services for less money) notwithstanding.

Laffer’s analysis is not sophisticated, and instead aspires to be simple and straightforward. It focuses on the nine states that have no income tax and the nine states with the highest income tax rates, while ignoring the other 32 states. It then looks at three measures of economic performance in these 18 states, shows that they look a lot better in the no-income-tax state group, and seeks to conclude that the performance differences are likely caused by the income tax policy differences. Stated starkly, the key assumption of this exercise is that, were it not for the difference in income tax policy, the two sets of states would have performed about the same. But this is a very strong assumption and one that is really not verifiable. I don’t mean that one cannot learn from such an exercise, but strong and clear conclusions cannot be drawn.

What are the three metrics of economic performance Laffer uses? The first two are the percentage increase in state gross domestic product and non-farm payroll employment. The third metric is the absolute number of domestic net migration in and out of the state. This last one is a bit bizarre because it focuses on absolute rather than percentage changes. Thus, no matter how big the percentage migration to a small state, it will be a tiny number of people compared to even a small percentage migration into a big state. For example, over the last decade, Delaware had one of the largest percentage domestic migration rates, but it comes in the middle of the pack of the Laffer ranking because the net migration didn’t amount to that many people.

More importantly, none of the three metrics captures what’s happened to the level of well-being of a typical resident, most commonly measured by per capita income or per capita gross domestic product. Instead, all of Laffer’s metrics are aggregate measures; for any given per capita measure, if the state’s population grows, the measure goes up.

Thus, if the state’s residents are getting poorer over time, but there are more of them for whatever reason, aggregate state gross domestic product might rise. Of course, Laffer is aware of this, and in the reports that discuss this analysis, he argues that population growth is a perfectly reasonable indicator of the attractiveness of a state’s fiscal system: if the state’s economic climate is good, it will attract more people and more businesses and reduce the emigration of individuals and firms from the state.

What it comes down to is whether you believe that the large demographic shifts across states over the last decade (and before that) have been materially caused by the different income tax policies or whether you believe these two phenomena are largely coincidental. For a few reasons, I believe it’s the latter.

Is a Low Income Tax Rate Indeed the Elixir of Growth?

First, there are other analyses of this issue, which you can read here and here, that make arguably better methodological choices that do not come to the same conclusions as Laffer’s analysis.

Taxes do matter. States should watch carefully taxes on particularly mobile factors, firms or people. Consumption-based taxes score higher on an economic performance criterion than income-based taxes. But, of course, this is not the only criterion for judging tax policy — equity matters, too.

Where Are We on the Curve?

Now a few words on the famous eponymous Laffer Curve. The brilliance of the curve is that it captures vividly the idea that pushing tax rates too high will eventually become counter-productive in terms of revenue. No one benefits if raising tax rates reduces revenue — certainly not those who are taxed, and not those who would benefit from collecting additional revenue. But the question is at what tax rate a perverse revenue response would actually kick in. I think it is fair to say that the vast majority of the public finance community believes that the United States is far below that point. See Peter Diamond’s response to Laffer in this Making Sen$e piece and his paper with Emmanuel Saez that makes the point in academic detail. 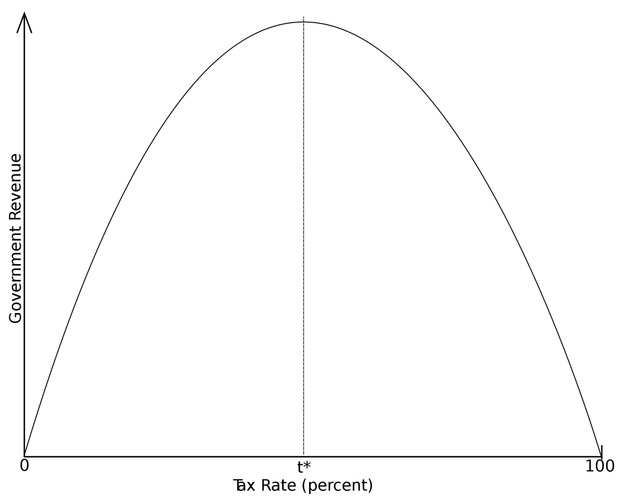 The Laffer Curve shows a hypothetical relationship between taxes and government revenue.

The belief that tax rates are currently well below their revenue-maximizing level is largely, though not entirely, based on an analysis of the Reagan-era tax cuts. That these tax changes affected behavior is indisputable — lower taxes did induce some people to work more — but the behavioral response was nowhere near large enough to increase aggregate revenue.

Would a marginal tax rate of 70 percent or higher on every dollar earned above some top income threshold result in more or less total tax revenue due to a behavioral response? This is a more controversial question. But right now, the marginal rate is 39.6 percent, and a family must earn more than $400,000, after subtracting deductions and exemptions, before it kicks in. Every dollar above $400,000 is then taxed at 39.6 percent. For total revenue to decrease, high earners would have to cut back their taxable income substantially.

Just as with the analysis of U.S. state data, the fact that we are on the benign side of the Laffer curve does not imply that we should ignore the economic costs of tax disincentives. Even if a tax increase raises revenue, it does so while imposing costs on the efficient operation of the economy. Although the starkest statements of the importance of behavioral response may not be true, policy makers should not ignore these responses.

In this 2012 Making Sen$e report, Arthur Laffer defends his famous curve, even drawing it on a napkin the way he did for the Ford administration, and Nobel Laureate Peter Diamond responds.