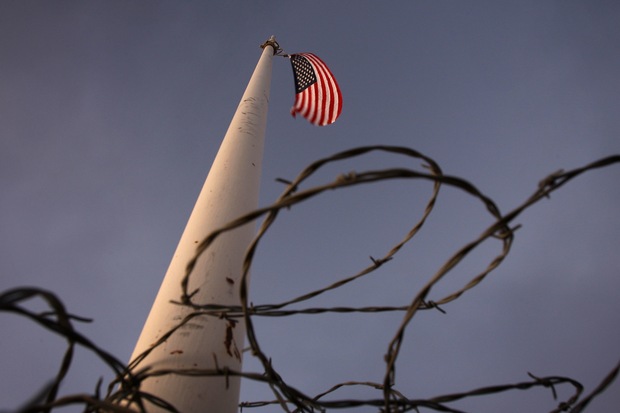 Paul Solman: A battle rages in economic policy circles: Should America make its borders more open to high-tech guest workers, or should we batten the hatches? Even those who oppose totally open immigration often support temporary guest worker visas, known as H-1B work visas, for high-tech.

But some oppose them, arguing that — as in other industries — workers from abroad undercut the wages of those domestic workers who would otherwise do the jobs here in America.

Today we present the case against high-tech guest workers from a trio of academic researchers associated with the Economic Policy Institute.

Hal Salzman is a professor at the John J. Heldrich Center for Workforce Development and the Edward J. Bloustein School of Planning and Public Policy at Rutgers University. B. Lindsay Lowell is director of policy studies at the Institute for the Study of International Migration at Georgetown University. Daniel Kuehn is an adjunct professor and doctoral candidate in American University’s department of economics.

Salzman, Lowell and Kuehn: When Bill Clinton was president, wages for American IT workers were climbing and American students were clamoring to become computer scientists. Fifteen years later, average real IT wages are no higher. It is no coincidence that high-tech industries are now using guest workers to fill two-thirds of new IT jobs.

And now they’re asking Congress to provide them with an even greater supply of guest workers — a supply that by the IT industry’s own estimates would equal 150 percent of the expected number of new IT jobs each and every year going forward. With its passage of the comprehensive immigration reform bill, the Senate has complied, putting out a sign for IT jobs that says, “We prefer guest workers.”

The IT industry and its many supporters argue that without this infusion of guest workers it will starve because of the scarcity of domestic native and foreign-born citizens with the right aptitude or interest. Researchers like us, who have the temerity to suggest that the evidence fails to justify importing ever more guest workers, are accused of being anti-immigrant, anti-capitalist, Luddites, or just plain troglodytes who can’t fathom the character of modern technology industries.

For those of us who simply want to get the policy right, however, this is a debate about America’s policies for creating good jobs, strong technology and an innovation-based economy. We welcome immigrants and support an immigration policy that draws the best and the brightest and provides opportunity to newcomers. But policy should not be about targeting government giveaways to a few industries by supplying ever more guest workers when there is an ample domestic supply of qualified graduates and workers.

Our analysis of the data finds that high-skill guest worker programs supply the preponderance of all new hires for the IT industry. The inflow of guest workers is equal to half of all IT hires each year and fully two-thirds of annual hires of workers younger than 30.

Can it be a coincidence that wages in IT jobs have been stagnant for over a decade? The chart below shows trends for programmer and system analyst jobs; wages for other IT occupations follow similar trends. 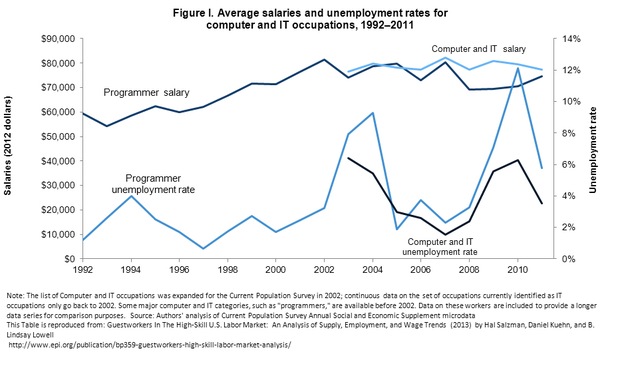 In the above graph of average salaries and unemployment rates for computer and IT occupations from 1992-2011, wages for IT workers have held steady over the past decade. This table is reproduced from “Guestworkers In The High-Skill U.S. Labor Market: An Analysis of Supply, Employment, and Wage Trends” (2013) by Salzman, Kuehn and Lowell.

At the same time, U.S. colleges are graduating more than twice as many science, technology, engineering and math (STEM) graduates than the number of STEM openings generated by our economy each year. In short, there is little justification to support the escalating numbers of new guest workers called for in the Senate’s S744 legislation. Why then did it pass?

Today’s guest worker programs target an important industry with a substantial hold on the public’s imagination. But guest worker programs should be justified by national interests, not by the shortsighted interests of a particular industry. Proclaiming “shortages” where there is no evidence of them is not only disingenuous, it obscures the likely impact of large-scale guest worker programs, which stand to hurt all STEM grads, but especially minorities who are underrepresented in high-tech, as well as other foreign-born workers who compete most with newcomers. Can anyone argue that prioritizing access to good employment for high-skill domestic workers is not in the national interest? 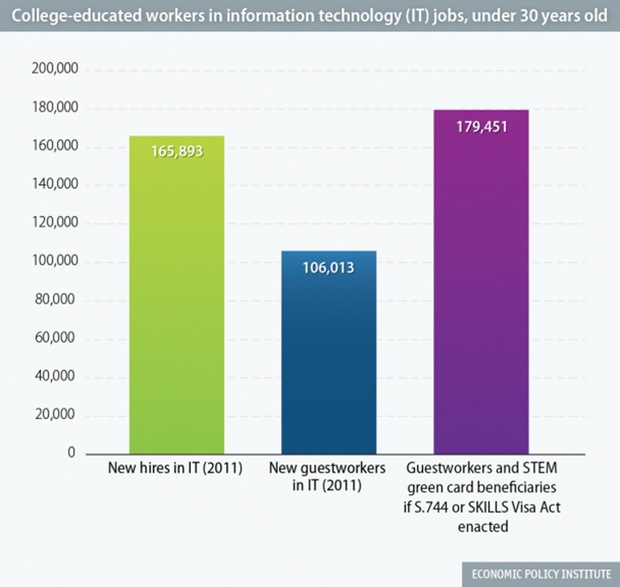 The number of guest workers and STEM green card beneficiaries in the Senate’s legislation exceeds the number of new hires in the IT industry in 2011. Image courtesy of Economic Policy Institute.

Isn’t Ours a Market Economy?

Markets are supposed to reflect demand through the price mechanism. In the case of labor, the “price” is wages. How can it be, then, that if the IT industry is experiencing labor shortages, wage levels in this highly profitable industry are no higher than they were in the last millennium? How can an industry expect to attract the best workers without raising wages? Is there what economists call a “market failure” here?

Or is the hidden truth quite simply that large supplies of guest workers allow many firms to swap out higher-paid, high-skill domestic workers for lower-paid, high-skill guest workers? A recent analysis by the Brookings Institution observes that “it is likely that the extra supply of foreign-born workers does bring downward pressure on the wages of incumbent workers, as research suggests.”

All the evidence suggests the IT labor market is still bound by the usual dynamics of supply and demand. When we look at the trends of the past 20 years, we see that when wages increase, the number of computer science graduates increases. When wages fall, the number of graduates falls. When the supply of guest workers increases, wages stay flat, and too many domestic students must find employment in other fields.

Some commentators argue that this last result is good for the economy: science and engineering skills are now being used in millions of non-STEM jobs. But an alternative view is that far too many domestic STEM graduates are in jobs that do not fully use their education, which represents a loss of our greatest source of innovators.

Yes, employers claim they have thousands of unfilled job openings, but the evidence is hardly compelling. Only about half of engineering graduates find engineering jobs, down from previous rates of about two-thirds before the current recession began in 2007. At the largest IT jobs website DICE.com, over half of the advertisements are for contract, short-term and part-time jobs — assuming these jobs exist at all. (A recent Making Sen$e story suggested they well may not.) But even if they are available, these are not the types of jobs that U.S. graduates will find attractive, nor are they the types of jobs that will allow these graduates to pay off student loans, much less enter the middle class.

Meanwhile studies by Peter Cappelli of the Wharton School and by Burt Barnow of George Washington University find a decrease in the intensity of firms’ recruitment efforts since the recession and an increase in pickiness about whom they are willing to hire. Again, the inference seems obvious: the supply of potential workers is already plentiful relative to employer demand. So why are stories about the need for guest workers and the U.S. falling behind in the global high-tech talent search dominating the discussion?

H-1B guest workers are concentrated in computer programmer and system analyst jobs; in fact, they fill 85 percent of them. But most of these are commodity-like production jobs in IT services, doing back office programming for companies. A disproportionate number of H-1Bs provide onshore customer management for offshore programming teams. Ironically, without the visas, much of the programming work couldn’t have been offshored in the first place.

There may be highly innovative guest workers, but most are in jobs far away from the innovation frontier. The Economic Policy Institute’s Ron Hira found that few of the largest H-1B employers could be considered technology innovators, with most generating very low levels of patents. So an often-heard argument for a massive increase in guest workers — that we’ll snag a few key innovators for America — is in reality a high stakes lottery with few winners but, like most lotteries, many losers. Increasing the number of guest workers will not ensure that we admit, among the tens of thousands of guest workers, the few geniuses who could make a decisive contribution relative to American workers.

Those on the front lines of IT now tell students that given the industry’s stagnant wages and unstable career tracks, better students should seek jobs elsewhere. An extensive survey of a recent college cohort by the National Center for Educational Statistics corroborates their advice. Only two-thirds of computer science graduates went into IT jobs in 2009. Of those not landing an IT job, half said they found a better job elsewhere. Fully one third reported there were no IT jobs available.

This was also the finding in our analysis of changes in the composition of STEM graduates going into STEM jobs over the past three decades. We found that although the overall supply remained strong, fewer of the highest performing students were going into STEM jobs.
As the lead author of a widely-cited study asserting the need for more STEM graduates, Tony Carnevale of Georgetown University’s Center on Education and the Workforce said, “If you’re a high math student in America, from a purely economic point of view, it’s crazy to go into STEM.” The best of these students flock to Wall Street and corporate law firms and the rest end up employed in non-STEM jobs which often pay less and underutilize their skills.

Many of the claims about IT worker shortages thus boil down to employer reports about the difficulties they face in hiring. Our fieldwork finds that reports of hiring difficulties often reflect unrealistic expectations and sometimes strategic posturing. Traditionally, during tight labor markets, such as before the dot.com crash, employers will hire good candidates who may not be “perfect,” but the firms will invest in training them.

However, the two recent studies of employer recruiting mentioned above find a decrease in recruitment intensity and little evidence of efforts to address unmet hiring needs. Peter Cappelli of the Wharton School concludes that employers have become willing to wait, hoping for the perfect candidate, believing that unemployment is high and there must be someone who will not require training. Because it is a slow economy, there is less urgency to fill positions quickly and a longer search time is possible.

Currently, U.S. colleges graduate far more scientists and engineers than find employment in those fields every year — about 200,000 more — while the IT industry fills about two-thirds of its entry-level positions with guest workers.

At the same time, IT wages have stagnated for over a decade. We cannot expect to build a strong STEM workforce and encourage domestic innovation by developing policies that undermine the quality of STEM jobs. Before asking government to intervene in labor markets by handing out more guest worker visas and green cards to STEM graduates, we should ask for audits of shortage claims and workforce impacts as a first step toward developing evidence-based policy on this issue, an issue critical to the nation’s future.

Asking domestic graduates, both native-born and immigrant, to compete with guest workers on wages is not a winning strategy for strengthening U.S. science, technology and innovation.