The Confidence of Ben Bernanke in Germany

“The Fed chairman’s message, though scholarly in tone, was unusually blunt,” wrote the Wall Street Journal, “laying blame for inflationary pressures in emerging markets and for tensions over currencies on countries like China.”

The Financial Times underscored another theme: “Mr. Bernanke’s speech was a robust defense of the Fed’s $600bn of asset purchases in the face of international criticism.” 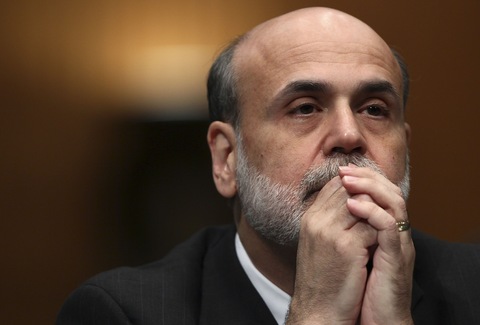 For a speech by a Federal Reserve Chairman, Ben Bernanke’s remarks on “global rebalancing” certainly weren’t designed to fly under the radar.

“The Federal Reserve isn’t known for making feisty speeches,” wrote Derek Thompson on TheAtlantic.com, but in “what might be his most pointed speech yet, [he] hit back against critics of his new $600 billion stimulus, a new wave of US Treasury purchases he hopes will raise inflation and lower interest rates. He unleashed barely veiled attacks against undervalued currencies in China and other emerging markets. And, for the first time,” Thompson added, “he called on US lawmakers to pass another round of stimulus.”

All true. The speech itself is available online and is indeed even more candid and to-the-point than Bernanke’s usual public remarks. And, one might add, more political.

Bernanke’s been taking enormous heat of late – from German Finance Minister Wolfgang Schaeuble, for example, who said a few weeks ago that he was “dumbfounded” by the Fed’s intention of injecting $600 billion or more into the U.S. economy.

The term ‘quantitative easing’ is new to people. The United States Federal Reserve (Fed) Chairman Ben Bernanke was pressured into taking drastic action after the US midterm election reflected the disenchantment of Americans with the Barack Obama administration. The arcane jargon means printing $600 billion of paper money to enable the government to buy its own bonds, which in turn means devaluing the US dollar against other currencies. ‘Quantitative easing’ is supposed to soften the crudity of the act, just like ‘subprime’ softened the crudity of toxic loans.

And then there is the Republican/Libertarian opposition to the Fed, its policy, and any hint of further stimulus. Paul Krugman calls it “The Axis of Depression — China and Germany want America to stay uncompetitive; Republicans want the economy to stay weak as long as there’s a Democrat in the White House.”

Chinese, Germans, Republicans and Libertarians would all, of course, beg to differ.

Some of the particulars of the Chinese position were laid out in a story of ours on the NewsHour last week. But for a more general critique, try this: the Fed is trying to keep an unsustainable game going, papering over our economic problems with more and more new dollars and that eventually, the bubble burst with even greater ferocity than the last time around.

But here’s Bernanke’s counter: “on its current economic trajectory the United States runs the risk of seeing millions of workers unemployed or underemployed for many years. As a society, we should find that outcome unacceptable.”

He elaborated before his European audience:

(T)he increase of 5 percentage points in the U.S. unemployment rate is roughly double that seen in the euro area, the United Kingdom, Japan, or Canada. Of some 8.4 million U.S. jobs lost between the peak of the expansion and the end of 2009, only about 900,000 have been restored thus far. Of course, the jobs gap is presumably even larger if one takes into account the natural increase in the size of the working age population over the past three years.

Of particular concern is the substantial increase in the share of unemployed workers who have been without work for six months or more. Long-term unemployment not only imposes extreme hardship on jobless people and their families, but, by eroding these workers’ skills and weakening their attachment to the labor force, it may also convert what might otherwise be temporary cyclical unemployment into much more intractable long-term structural unemployment. In addition, persistently high unemployment, through its adverse effects on household income and confidence, could threaten the strength and sustainability of the recovery.

So, you might ask: Who could argue with that? With some 30 million Americans un- or under-employed, or too discouraged to look for work at all, what choice is there but to try goosing the economy? Isn’t that what extending the Bush tax cuts is supposedly about?

The rebuttal? If businesses are spooked, not reassured, by the Fed’s actions, fearing future inflation, they aren’t likely to hire. If investors are spooked, they sell their U.S. stocks and bonds, lowering wealth and thus spending, raising interest rates. That would be, of course, just the opposite of what Bernanke intends.

Long have we noted that “credit” comes from the Latin “credere” – “to believe.” On this one point all can agree: economic activity is spurred by faith, trust, confidence. But how confidence-building is the following, also from Bernanke’s speech?

“We cannot rule out the possibility that unemployment might rise further in the near term, creating added risks for the recovery.”

How calming is this excerpt?

Although the parallels are certainly far from perfect, and I am certainly not predicting a new Depression, some of the lessons from that grim period are applicable today.

The Chairman is just being honest. He’s trying to appeal to China, Germany and his Republican critics to be reasonable and to understand that we’re all in this together; that if America sags, exporters like the Chinese and the Germans will sag; that if unemployment grows, Republicans as well as Democrats will be on the skids.

In short, he’s trying to do what he can, given the situation we’re in. That’s his job. But were he to be even more honest, he might ask the critics themselves: What do you propose?

If the answer is “belt tightening,” he might respond: “Be careful what you wish for.”