‘The Entrepreneurial State’: Apple Didn’t Build Your iPhone; Your Taxes Did 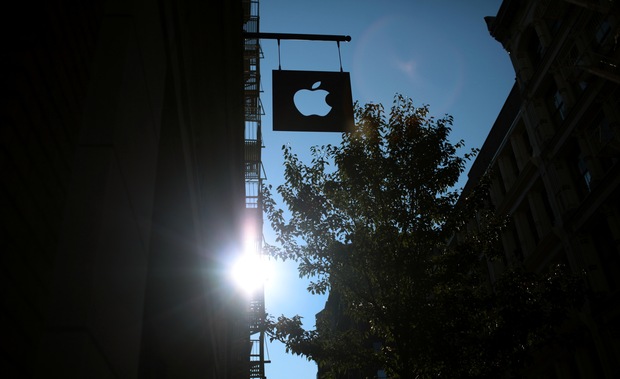 Government support for research and development is responsible for much of the innovation that drives GDP, argues Mariana Mazzucato. Photo courtesy of Stephen Yang/Bloomberg via Getty Images.

As the deadline for raising the government debt limit fast approaches, and wrangling on the issue in Congress intensifies, Mariana Mazzucato reminds us of the difference between public and private debt. Professor of economics at the University of Sussex, Mazzucato is the author of “The Entrepreneurial State: Debunking Private vs. Public Sector Myths.” Her provocative “they-didn’t-build-that” thesis, that the government funds most of the initial research and development on which the private sector capitalizes, has generated a lot of buzz in the financial press, including Martin Wolf’s review in the Financial Times calling it “basically right.” So we asked her to explain her thinking to our Business Desk audience.

Is government debt slowing economic growth, if not impeding it? The world-wide economic crisis that began in 2007 has kept that question alive, despite the fact that it was private debt that caused the crisis in the first place. But attempts to curb the crisis have also led to an explosion of public sector expenditures like bank bailouts and unemployment insurance that have ballooned debt levels. At the same time, lower tax receipts due to falling incomes have prompted even more borrowing.

Yet amnesia and dogma have conflated the public debt that helped cure the crisis with the private debt that caused it. The Reinhart-Rogoff saga seems to have ended with evidence winning out over ideological fiction. That’s because the government debt threshold these noted economists supposedly discovered — surpass a 90 percent ratio of debt-to-GDP and you’re screwed — seems to have been based on statistical error. But despite the correction, countries across the globe are still being asked to slash spending in hopes of kick starting economic growth.

My own work shows the utter foolishness of such a strategy. What matters is not the absolute size of debt, but what that debt consists of. Throughout history, strategic government expenditures have played a key role in spurring economic growth. Indeed, by forcing the world’s weakest economies to cut public spending — in key areas like education, research and health — their potential for long-run growth is weakening. Spain, for instance, has cut its research spending by 40 percent since 2009. Will this help it create the kind of goods and services the world might want to buy — and be as competitive as its Nordic neighbors? It seems wildly unlikely.

The key question is simple: what causes GDP growth? And the answer from economists is that, at the very least, spending on education, human capital, and research are tightly related to it. Indeed, Robert Solow, who won the Nobel Prize in Economics in 1987, found that close to 90 percent of growth is not explained by the usual suspects, capital and labor. They account for only 10 percent. So Solow called the unaccounted-for 90 percent the “residual.” And what drove the residual? It had to be technology. And how is technology fostered? More often than not, down through history, by government investment, from the roads of ancient Rome to the Internet of modern America.

However, things are not quite so easy. Which areas should the government fund? Traditional economic theory argues that government funding should be limited to areas where the free market is not working properly because of so-called “market failures,” some of which might be due to the existence of “public goods” like basic research, which are hard to make proprietary and profitable since they’re quickly available to everyone. As a result, the private sector under-invests.

Detroit May Be Bankrupt, but as an American, You’re Not

So if government nudges the private sector to invest by doing the basic research itself, goes the argument, business will promptly respond by innovating. Thus policy makers have obsessed over different types of tax incentives (from R&D tax credits to recent tax cuts related to patents) in order to increase the amount which the business sector spends on R&D.

I have been pushing a very different view, as embodied in my recent book “The Entrepreneurial State: Debunking Private vs. Public Sector Myths.” I argue that businesses are typically timid — waiting to invest until they can clearly see new technological and market opportunities. And evidence shows that such opportunities come when large sums of public money are spent directly on high risk (and high cost) technological missions. This raises debt of course, but also GDP, keeping the ratio of debt-to-GDP in check.

These missions are expensive precisely because the government does much more than just solve market failures. It intervenes in both basic and applied research and even provides early stage seed finance to private companies. Indeed, Small Business Innovation Research (SBIR) grants have funded a higher percentage of early stage seed finance than private capital. This is because private finance is too risk-averse — afraid — to engage with industries characterized by high technological and market risk. The fear explains why we have seen venture capital entering, in industry after industry, only decades after the initial high risk has been absorbed by government.

Mission-oriented public investment put men on the moon, and later, lead to the invention and commercialization of the Internet, which in turn has stimulated growth in many sectors of the economy. Indeed, as I describe in the longest chapter of my book, the U.S. government has been a leading player in funding not only the Internet but all the other technologies — GPS, touchscreen display, and the new Siri voice-activated personal assistant — that make the iPhone, for example, a miracle of American technology.

Crucially, mission-oriented policies are needed today to tackle climate change and other large societal, technological challenges. But the fear that such investments will cause debt to rise too high and stymie growth — ignoring the potential positive effects on growth that these investments can make in the long run — is paralyzing governments throughout the world.

Furthermore, there is the general belief that the direction of investments should be determined by the market, not government, because government consists of a bunch of bureaucrats who lack expertise. But the technological leadership in countries like Singapore, Korea, China, Israel, Brazil, Finland, Denmark and Germany is a result of the well-funded network of state agencies in those countries that are able to attract expertise and drive change, working of course, alongside the private sector, but often leading it.

The U.S. Department of Energy (DoE) was recently run by a Nobel Prize winning physicist. And the atmosphere at the Advanced Research Project Agency-Energy, which is trying to do for renewable energy what the Defense Advanced Research Agency did for the Internet, is just as dynamic and creative as Google. And historically, it is investments driven by such agencies (including the National Science Foundation, National Nanotech Initiative, National Institutes of Health) that galvanize private sector investment.

Indeed, when Pfizer recently closed down a large R&D lab in Sandwich, Kent, and transferred it to Boston, Massachusetts, it was not due to the lower taxes or laxer regulation for which industry is constantly lobbying. They moved because of the large amounts of money that the National Institutes of Health (NIH) has been spending on research and the mission of improved health care in the United States: $792 billion from 1936-2011 (in 2011 dollars), with $30.9 billion in 2012 alone.

These lessons are important for policy makers interested in fostering entrepreneurship. While Steve Jobs was a genius in his ability to exploit existing government-funded technologies in new ways, he would have had little to work with absent massive public spending. And given the public spending cuts that are happening in most countries the world over, the question then becomes: will there be a future wave to surf in places like Silicon Valley, or is the technology tide destined to turn?

Furthermore, casting the public sector as the villain and business as savior has relieved the private sector from any obligation to increase its own commitment to the innovation process. There simply are not enough large businesses today playing the role that Xerox PARC (the Palo Alto Research Center) and AT&T (Bell Labs) played in the past.

Today’s big companies, like Cisco and Pfizer, spend almost as much on share-repurchase schemes (which enrich those who own stock) as they spend on research. Interestingly, the big “repurchasers” (the biggest being in oil and pharma) often justify such buybacks with the claim that there are no other “opportunities” for their investments. But really? No opportunities in health for pharma these days? Nothing for oil companies to invest in? What about safe and clean renewable energy?

When building innovation “eco-systems,” then, it is important to make sure the role of business is symbiotic, not parasitic. That means, if we want to rebalance the economy, we need to rebalance the story we tell about who the innovators really are. Interestingly, it was the venture capital lobby in the mid-1970s that pushed for the capital gains tax to fall by 50 percent (from 40 percent in 1976 to 20 percent in the mid ’80s). It has been falling ever since, based on the narrative that only thus will the entrepreneurial “risk-takers’ do their thing and enrich us all.

But that narrative is false. The entrepreneurial state has funded the radical innovation behind much if not most of modern economic growth. Denying government today the resources to do its thing endangers us all.

Paul Solman: On Fridays, I try to answer some of the questions readers and viewers submit to the Business Desk. This week’s batch includes a complaint about my apparent approval of older Americans working longer.

Charlyne — Vallejo, Calif.: What effect has the sequester had on employment numbers?

Paul Solman: It has surely depressed them. Government (federal, state and local) employment represents somewhere in the vicinity of 15 percent of all jobs in this country. “Sequester” government spending and, at the very least, you constrain government job growth. And sure enough, over the past year, federal government employment has fallen by 65,000 jobs while the economy has added more than a million jobs. What more evidence do you need?

Mike Wolf — Corvallis, Ore.: Suggesting that folks work to 70 or more, as you have, is ridiculous. Where are the jobs? Social Security was created to get those folks out of the workplace and open up jobs for the young .

“Where are the jobs?” you ask. I can only respond with the statistics, which indicate that the unemployment rate for Americans “65 years and over” is only 4.8 percent, compared to 6.3 percent just one year ago and 7.3 percent for the workforce as a whole. See our web platform, “New Adventures for Older Americans,” to see how much longer Americans are working on average.

Arlene Ceterski –Trenton, N.J.: I listened to your report on seniors working beyond the retirement age and agree it is good for the people who are working, but is it good for the overall economy when seniors continue to work, and jobs are then being denied to the younger generation when the unemployment rate is so high? Has any study been done to analyze which is the better route to go: Seniors retire to make room for the younger generation or vice-versa?

Paul Solman: I’m not aware of any such study. I wonder, in fact, how you could conduct one. I mean, “better” for whom? The economy as a whole? I can’t imagine how one would know.

It seems to me older workers like myself must be clogging the jobs pipeline, at least to some extent. Is that fair or unfair? I’m hardly the one to judge. On the other hand, when I interview the older unemployed and hear story after story about age discrimination, that seems patently unfair.