The Great Gatsby Curve: Inequality and the End of Upward Mobility

Was Jay Gatsby a crook, or was he the victim of a crooked system? Photo courtesy of Warner Bros.

In our third in a series of three posts examining economic inequality in America, Miles Corak, professor of economics at the University of Ottawa, uses “The Great Gastsby” metaphor to respond to our two previous posters on this topic: Alan Krueger, President Obama’s outgoing chair of the Council of Economic Advisers, who introduced readers to the Great Gatsby Curve on this page on Friday, and Greg Mankiw, who held the same position under George W. Bush, and argued against government redistribution of wealth to create more equality of opportunity on this page on Saturday.

Corak’s post for the Making Sen$e page, which appears in full below, is informed by an article that is forthcoming in the summer issue of the Journal of Economic Perspectives. You can read a draft of the forthcoming article in PDF form here or on his website.

Corak uses F. Scott Fitzgerald’s Jay Gatsby to explain the competing interpretations of income inequality that we’ve explored over the past few days on this page. So, as you read, keep this Fitzgerald quote in mind: “The test of a first-rate intelligence is the ability to keep two opposed thoughts in mind at the same time, and still retain the ability to function.”

Miles Corak: Was Jay Gatsby, the ambitious hero in F. Scott Fitzgerald’s
novel, a crook who would stop at nothing to get ahead, or the
victim of a crooked game, a system in which the rules are rigged
against those with anything other than blue blood, regardless
of their ambition? “The Great Gatsby” is certainly open to multiple
interpretations, but that is precisely what makes a novel great:
characters and plot that not only challenge our deeply held
beliefs, but also invite a different perspective depending upon
the times we live in.

Fitzgerald’s novel has long captured the American imagination
because it speaks so directly to the belief that anyone with
talent, energy and ambition can succeed regardless of their
starting point in life. It has all the more resonance now because
inequality has soared in the last three decades.

We re-read “The Great Gatsby,” and we re-make the movie, because we
wonder if Americans can still make it in a more polarized society
where the top 1 percent take home such a large slice of the economic
pie, a slice that is matched only by what was happening during
the roaring ’20s.

While “The American Dream” is probably best left to novelists,
this has not stopped economists from trying to put numbers to
metaphor.

Is inequality a good thing, reflecting the fruits of skill and
ambition and offering a promise of possibility for the
next generation? Or does it skew opportunity, crudely mirroring
the power of privilege and place and reflecting unfair barriers
to success regardless of talent?

It is a fact that countries with greater inequality of incomes
also tend to be countries in which a greater fraction of economic
advantage and disadvantage is passed on between parents and their
children.

It is now common to represent this relationship with what Alan
Krueger, the Princeton University economist and out-going
Chairperson of the Council of Economic Advisers, has referred to
as “The Great Gatsby Curve.” Krueger used this term for the
first time in a speech given in January 2012, and The White House
recently posted an explanatory info-graphic
on its website. 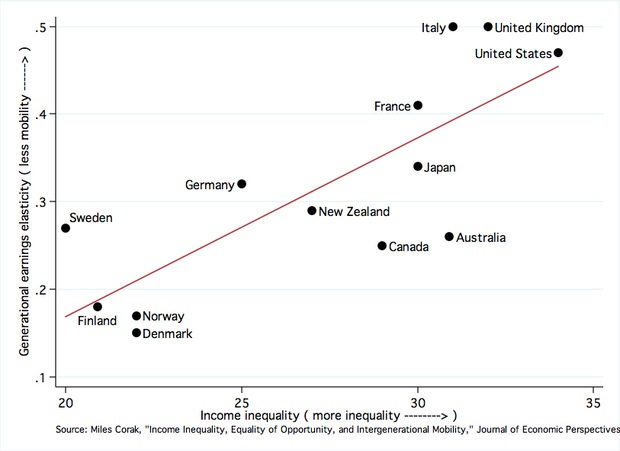 The United States has high income inequality across households and low economic mobility between generations.

The curve ranks countries along two dimensions. Moving
horizontally from left to right shows income inequality, as
measured about a generation ago, becoming higher and higher
across countries. During the early to mid 1980s, Finland, Sweden,
Norway and Denmark were the most equal, the United Kingdom and
the United States the least.

Moving vertically from bottom to top shows the average degree of
stickiness between child adult earnings and the earnings of the
family in which children were raised. In countries like Finland,
Norway and Denmark, the tie between parental economic status and
the adult earnings of children is weakest: less than one-fifth of
any economic advantage or disadvantage that a father may have had
in his time is passed on to a son in adulthood. In Italy, the
United Kingdom and the United States, roughly 50 percent of any
advantage or disadvantage is passed on.

Does this mean that if you want to live the American Dream, you should move
to Denmark? Or could it also mean that taxing the rich and giving
to the poor will not only reduce inequality in the here-and-now,
but also the degree to which it is passed on to the next
generation?

Well, the curve is open to alternative interpretations in part
because it is not a causal relationship.

But to dismiss it by simply saying, “correlation does not imply
causation,” is too glib and risks missing an important message
about the underlying causes.

Economic theory predicts such a relationship, and therefore
suggests that it is reasonable to juxtapose measures of
inequality and mobility as a starting point for understanding the
underlying causes and their implications.

Theory also suggests that there is no single driver of this
relationship: the interaction between families, labor markets
and public policies all structure a child’s opportunities and
determine the extent to which adult earnings are related to
family background — but they do so in different ways across
national contexts.

The “Gatsby was a crook” point of view stresses the fundamental
role of individual choice, rooted to some important degree in
differences in parenting and family values. From this perspective,
America’s position on the curve, and particularly the
relatively low rates of upward economic mobility of children
raised by the lowest income households, is caused by family
dysfunction.

Single parent families are the underlying driver pushing up the
poverty rate, raising the risk of vulnerability for children
and undoing any public policies trying to level the playing
field. At the same time, top earners are not taking broader
social responsibility by championing the values and parenting
strategies underlying their own success.

The “Gatsby was a victim of a crooked system” point of view
suggests that a more polarized labor market is the main driver,
eventually being shadowed in the capacities of parents to invest
in their children’s future, and even in family structure and
values.

Parents with more education invest more in their children, and in
an era of rising labor market inequality, not only do they have
more resources, they have a much stronger incentive to see that
their children in turn develop the skills that will lead to
success.

Globalization and technical change have not only raised the
returns to a good education, they have also implied that wages
have been stagnant, and even falling, among less skilled parents,
putting extra strains on their families. Having to run harder
just to stand still, these families not only have less money for
their children’s future, but also less time. The chances that
marriages last, and indeed the economic incentives to even get
married, are more troublesome when good jobs and good wages don’t
offer the same bedrock they once did.

On top of all this, public policy is designed to favor the
relatively well-to-do. Access to high quality early childhood
education and primary schools is limited to those with wealth.
Their children are put on the direct path to the best
colleges, offering a gateway to labor market success.

From this perspective, America’s position on the curve is the
result of rising returns to schooling and declining access to
good jobs, a trend that has been much stronger in the United
States than elsewhere. With more inequality, public policy choices
are also skewed, particularly in institutions fostering human
capital development like education and health care, to tilt
rather than to level the playing field.

Social science doesn’t always give us hard-and-fast truths, but
it does give us more than metaphor. And while even agreed upon
facts can be legitimately viewed as having different meanings, we
should be clear that the message underlying the Gatsby
Curve is that inequality may lower mobility because it has the
potential to shape opportunity.

The curve is telling us that inequality heightens the income
consequences of innate and other family-based differences between
individuals; that inequality also changes opportunities,
incentives and institutions that form, develop and transmit
characteristics and skills valued in the labor market; and that
inequality shifts the balance of power so that some groups are in
a position to structure policies or otherwise support their
children’s achievement independent of talent.

America’s position on the Gatsby Curve calls, as a result,
for a careful second reading of the configuration of these forces
to fully appreciate both the benefits and the costs of higher
inequality.