The Immigrant Brain Drain: How America Is Losing Its High-Tech Talent 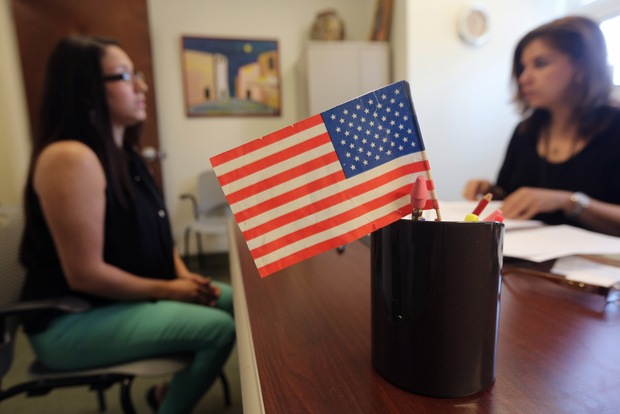 Paul Solman: There aren’t enough IT jobs to meet demand? Vivek Wadhwa, director of research at Pratt School of Engineering, Duke University and a fellow at Stanford Law School, questions that claim. He responds to Wednesday’s post on the Making Sen$e Business Desk from Hal Salzman, B. Lindsay Lowell and Daniel Kuehn, in which they argued that competition from high-tech guest workers is keeping domestic workers’ wages low and making it harder for native STEM graduates to find jobs in their fields.

Wadhwa, the author of “The Immigrant Exodus: Why America Is Losing the Global Race to Capture Entrepreneurial Talent,” takes issue with much of their reasoning and shows that the demand for STEM workers in this country is still higher than the supply. “Data may say it’s a sunny day, but you need to open the window to make sure that it isn’t actually raining,” Wadhwa says, confronting Salzman’s work.

In earlier Making Sen$e posts, Wadhwa broke through conventional wisdom to argue that innovation comes from experience, and that twice as many entrepreneurs are over age 50 than are under 25. Now, read Wadhwa’s attempt to open the window onto another kind of Silicon Valley diversity.

Vivek Wadhwa: Early in my academic career, at Duke University, I researched the graduation rates of engineers in India and China. Based on the numbers, I concluded that India’s IT industry would perish, China would rule the world in innovation, and the U.S. was doing just fine.

I also read papers by academics who analyzed U.S. science and engineering graduation data. They said that the U.S. was graduating three times as many engineers and scientists as it needed and that the excess graduates were moving into other professions. They also claimed that U.S. student performance on mathematics, science and reading tests had improved relative to other countries — and that U.S. enrollment in math and science courses was increasing. The concerns that parents, academics, businesses and policymakers have about U.S. science, technology, engineering and mathematics (STEM) education were therefore, the papers claimed, unfounded.

I believed them and wrote about this in a BusinessWeek article titled “The Science Education Myth.”

The Truth About Entrepreneurs: Twice As Many Are Over 50 as Are Under 25

Then I learned an important lesson: numbers never tell the complete story and some academics spend too much time in ivory towers. Data may say it’s a sunny day, but you need to open the window to make sure that it isn’t actually raining.

The graduation data were indeed misleading. Subsequent research that I performed by traveling to India, China and Silicon Valley revealed that India’s IT industry was booming, China’s graduates could not innovate and U.S. tech centers were starved for engineering talent.

I also researched the secret of Silicon Valley’s success. I learned that diversity and openness gave it a global advantage. I was surprised to find that immigrants were dominating the Valley’s entrepreneurial ecosystem and fueling U.S. innovation and job growth. My research team documented that from 1995 to 2005, immigrants founded 52 percent of Silicon Valley’s technology companies and contributed disproportionately to the patents filed by leading tech companies such as Qualcomm (72 percent) and Cisco (60 percent).

I realized that flawed data analysis and protectionist demands by nativists are causing our political leaders to advocate immigration policies that are choking U.S. innovation and economic growth.

Because there are not enough permanent-resident visas for the skilled foreign workers who are already in the U.S. on temporary visas, immigrant entrepreneurship has stalled. Tight limits on temporary guest worker visas, known as H-1B visas, are preventing technology companies from bringing in new foreign workers, so these companies are being forced to grow their operations abroad.

This means that we are limiting the benefits that come from domestic innovation and reducing the numbers of U.S.-based service, construction and administrative jobs. In trying to protect the jobs of the few, we are hurting the many.

I learned of the dire need that the tech industry has for skilled workers by speaking to the founders of technology companies and observing the bidding wars for talent. Things are so bad in Silicon Valley that, as NPR’s “All Tech Considered” reported, big companies are buying hot startups — not for their products, but for their people. They call these “acqui-hires.” They are paying ridiculously high prices for top talent.

It seems that my friend Hal Salzman of Rutgers University still hasn’t opened his window. Salzman was the author of the misleading report that I had cited in my BusinessWeek column in 2007. Not only has he not revised his research based on the reality of the technology industry, but he is now blaming his foreign students for discouraging American students from completing their science and engineering degrees.

He claims that there is a vast conspiracy by the technology industry to hire foreigners because they are cheaper, and he argues that immigration policies are industry “giveaways.” He likens immigration to “industry intervention.”

This is probably because Salzman is doing Big Labor’s bidding. Some trade unions are trying to close the doors to immigrants, whom they conveniently call “guest workers,” to send the mean-spirited message that foreigners are not welcome permanently in America. Some labor unions have realized that their future depends on economic growth and immigration. But others are working behind the scenes to limit all immigration, skilled and unskilled.

In a new report, published recently by the trade-union-dominated think tank Economic Policy Institute, Salzman cites the same questionable data as he did in 2007. But now he justifies Big Labor’s protectionist demands by citing surveys that were supposedly conducted by the National Center for Education Statistics (NCES) and through his own fieldwork. These form the scientific basis for his assertion that “guest workers are discouraging natives from studying STEM.” But I’m not aware of any such NCES surveys.

That’s not all. With one claim after another, Salzman and his co-authors distort reality to reach conclusions fundamentally opposed to actual facts. They say there are too many STEM graduates, whereas everyone knows that STEM, especially computer knowledge, is in high demand and that many job openings are hard to fill, as a recent Brookings analysis showed.

They say that STEM workers have falling wages, whereas, in fact, they are among the highest-paid workers in the economy, and salaries of professionals with up-to-date skills have been consistently increasing.

They say that these STEM workers contribute little to innovation, but the tech sector and its workforce are driving innovation.

Salzman et al. claim that we are graduating more students than there are jobs for computer workers. This is ridiculous. Let’s look at the data. According to the National Science Foundation, only 37,000 Americans graduate each year with a bachelor’s degree in computer science and another 10,000 with a master’s degree. So how many job openings are there for computer workers? Six hundred thousand at any time, according to the Conference Board.

Moreover, the Conference Board calculates that there are roughly four job openings for every unemployed computer worker, in comparison with an average of 0.4 job openings per worker in all fields. In other words, there aren’t nearly enough job seekers with the right skills or new graduates to fill demand for computer workers.

They also claim that wages are falling or flat for computer workers, but the data source they cite (the Bureau of Labor Statistics’ Current Population Survey) actually shows the opposite. Wages of computer and math workers, as well as of those in other STEM occupations, have increased and soared relative to most workers, even though computer and STEM workers are already among the highest-paid. Their analysis tries to recreate a time series that doesn’t exist by combining outdated occupational definitions with new ones.

Meanwhile, it is a completely uncontroversial fact that STEM graduates are earning higher wages than graduates in any other field of study and are more likely to find an occupation in their field than are graduates from other degree programs. Here are Census Bureau reports that show that STEM majors dominate other majors in terms of economic outcomes.Yet Salzman and his co-authors somehow reach the opposite conclusion.

This Census Bureau report shows that students following Salzman’s advice — and not majoring in computer science or engineering or working in those fields — would leave hundreds of thousands of dollars on the table.

They oddly cite Tony Carnevale from Georgetown suggesting that STEM graduates would be better off going into other fields. Sure, a few math geeks make a killing at hedge funds, but this is a tiny number of jobs, and guess what: hedge funds, too, look to hire foreign-born workers with STEM skills.

Rob Atkinson of The Information Technology Innovation Foundation also analyzed the Salzman data and claims. He debunked its many myths in a paper titled “The Real Story on Guestworkers in the High-skill U.S. Labor Market.” The report refutes each substantive claim, showing that American students are dropping out of STEM majors at high rates; those who complete their majors are finding abundant work opportunities in their fields; and the wages of most in IT occupations are growing.

So if we’re going to debate immigration, let’s open the window and look at the reality before trying to manipulate data. America is the great country it is because wave after wave of immigrants beat a path to its shores and made the generations of immigrants before them work harder, think smarter and, yes, compete for their jobs. Competition is healthy for our economy; protectionism will cause economic decline.

Most importantly, we need to realize that immigration is not an “industry giveaway” or “government intervention.” Today’s Americans are the descendants of “guest workers” — people who came to toil away and make America what it is today.

Vivek Wadhwa appeared on the NewsHour in May to explain how H-1B visas boost domestic innovation and growth.