The Mega Millions Lottery: to Play or Not to Play? 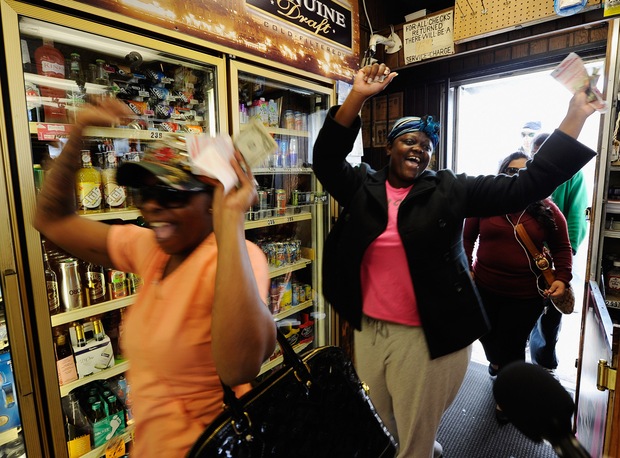 When a lottery pot gets as big as it is in Friday’s multi-state Mega Millions — $540 million, through a cumulative build-up of the pot — the “expected value” of the bet is actually positive. Another way to put it: You flip a coin, bet only 40 cents on both heads and tails, yet still get back a dollar no matter which turns up. An expected value of zero would be betting 50 cents. Assuming half the country bet heads and the other half tails, the winnings would exactly equal the amount bet.

In the usual lottery like Mega Millions, though, as opposed to a 50-50 coin flip, the bettors get back far less than the total amount bet. Much goes to the states themselves, and those who run the lottery take their cut as well. On the other hand, when the payout is greater than the total bet — because of past losses that build up in the pot — the game can be a good bet, mathematically speaking. Voltaire made his fortune buying out all the tickets for just such a lottery in the 1700s, and there are groups that try to do something similar these days. A group of seven won the previous high jackpot of $319 million back in 2005. Presumably, they bought more than a single $1 ticket.

Here’s a good explanation from one Lonnie Chrisman at a website called Lumina Decision Systems about Friday night’s drawing:

The Mega-Millions lottery for this week is at a record-setting grand prize level of [an estimated] $540M (when taken in installments) or $389M lump sum payout. The odds of any given ticket winning is 1 in 175,711,536. So, if you are a risk-neutral “investor” and you buy a ticket, your mean return-on-investment (ROI) may actually be positive in this case – a highly unusual situation for a lottery…

If it were as simple as saying that you had a 1 in 176M chance of winning $389M, then your mean winnings would be $2.17 for a $1 ticket. That would be a 117% ROI in only a few days time. Of course, it is not that simple due to two complicating factors: (the potential for) multiple winners, and taxes. When there are multiple winning numbers, the prize is split between winners, so even if you win you might receive only half, or one-third of the total payout. And of course, your take-home will be greatly reduced by taxes on the winnings.

(To Chrisman, this is a teachable moment. The purpose of the post is actually to teach the binomial theorem by way of calculating the likelihood of multiple winning tickets.)

Assuming there’s only one individual winner, s/he’ll be in the top tax bracket for both federal and state, so cut that $2.17 down to about $1.30 after taxes for every dollar “invested.” A 30 percent return. Not bad for a day’s work. IF YOU WIN. And, as Chrisman points out, so long as no one else does. Unfortunately, the odds of a winning ticket are about .000000006. That’s how likely you are to get any return at all.

So why bother? Especially since research has shown that, on average, lottery winners are no happier than they were before winning within a fairly short period of time. And that groups of winners like 2005’s “Lucky 7” often find themselves sued by co-workers and others who claim they were part of the consortium. And that gambling is a habit that can break a person and become hard to break itself.

Well, for people who can afford it and run no risk of gambling addiction, why not? The dream of striking it rich may afford a good deal more net happiness in the form of excitement, albeit short-lived, than winning actually would. A cheap thrill, you might say. And for those who feel they failed Charles Murray’s Do I Live in a Bubble quiz, it’s a way of connecting with a slice of American life that may well be as unfamiliar to them as it is common to so many others.

A reminder, though. Lottery players tend to be those who cannot afford it and are vulnerable to gambling addiction. Admittedly, state lotteries represent a libertarian way to raise taxes for education, i.e., voluntarily. And yes, they have been around for centuries. But to someone who has reported on lotteries since the 1970s, they seem a pernicious piece of policy — reverse social engineering, if you will, that’s especially perverse in an ever-more-unequal economy. The poor get poorer. The rich get richer, by refraining from buying a ticket.

Come to think of it, that’s another reason to buy a ticket Friday for those of you who can afford to but might not otherwise: Odds on, you’ll be doing your little bit for trickle down economics. Unless — heaven forbid — you should win.

For more, read Paul’s “Is it Dumb to Play the Lottery?“