The Pain in Spain: How Hard Is the Rain Gonna Fall on the Plains?

The specter of Euro-debt default is again roiling the markets. “Worries Over Europe Pose Risks for Euro,” read a headline in Monday’s Wall Street Journal. “Spain Pegs Cajas’ Possible Problem Debt,” warned another. (Cajas are the regional Spanish banks, the solvency of which interviewees of ours questioned last summer in Spain and again last month).

So what do our sources think now? One of them was our “fixer” in Spain, English ex-pat journalist Edward Hugh. What’s happening to the real estate friend he found for us: alarm-sounding Barcelona developer Miquel Baro, who owned 50 units of housing, had sold one in four years and was renting out the rest at half the cost of his mortgage? Last summer Baro had told us that “under Spanish law, we can only run losses for two months. After that, we have to declare bankruptcy.”

PAUL SOLMAN: How many other developers are in the same situation you are here in Spain?

So is Baro bankrupt? What’s happened to him in the last seven months?

“Basically nothing,” wrote Edward Hugh. “The properties are still there, waiting to be handed over to the banks.”

“You will ask why has it only been reduced by 4 billion euros, given the frantic efforts of the banks to get these assets off their books. Well, the answer is simple,” Hugh continued. “Think of Miquel.”

Miquel times 50,000. That is, the banks simply can’t afford to write his loans down — or off — without themselves going belly up.

Another of our summer sources was Madrid money manager Mikel Abasalo, who told us the government would have to assume the banks’ bad debts, turning Spanish government bonds sour. Abasalo had none in his portfolio. Last month, the Spanish government did assume responsibility for the cajas. Does Abasalo remain bond-shy? He wrote back several weeks ago, when markets were calm.

“Very much so. The recent relief I cannot justify on fundamentals. At 180 basis points above German Bunds, Spanish bonds do not adequately compensate for the risk of default.” [That is, to borrow money for 10 years by issuing bonds, risky Spain had to pay only 1.8 percent more than safe Germany- 180 “basis points”; 180 hundredths of one percent].

And what’s the spread today? 224 basis points: a 25 percent rise in interest cost and thus, in the market’s perception of Spain’s riskiness compared to Germany.

But this could just reflect the inordinate safety of German bonds (aka “bunds”). What about Spain itself? As it happens, there’s another market to look at: the market for credit default swaps (CDS), which we explained during the depths of the financial crisis. Jon Stewart gently mocked us for our efforts shortly thereafter. 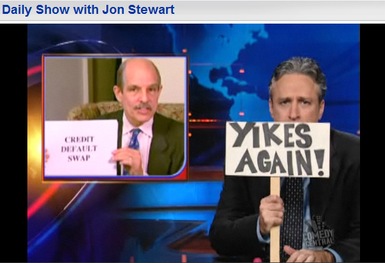 The basic point of CDS: to provide insurance against a credit default. So you own Spanish CDS to protect against — or simply bet on — Spain defaulting on its bonds. The higher the cost of the insurance or bet, the riskier the bonds are perceived to be.

When we were there in July, the European Union had initiated its grand bailout fund and CDS rates had plummeted to 200: $200 in yearly premiums, you could say, for insuring $10,000 in bonds. In gambler’s lingo, a 50-1 shot of default within a year.

The cost of Spanish CDS climbed steeply this fall and then fell again with another Euro-fund announcement. But in the past few weeks it’s risen again to above 250, as you can see in the one-year chart below. 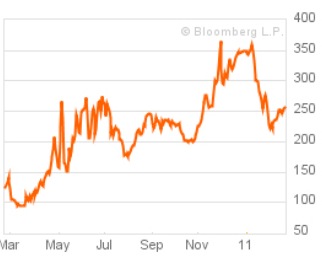 And it’s true of every one of the PIGS: Portugal, Ireland, Greece and Spain.

You can access the charts yourself on Bloomberg using this ticker followed by these suffixes:

And for those of you really into this stuff:

A quicker picture: this snapshot of of most of CDS prices and bond interest rates here. 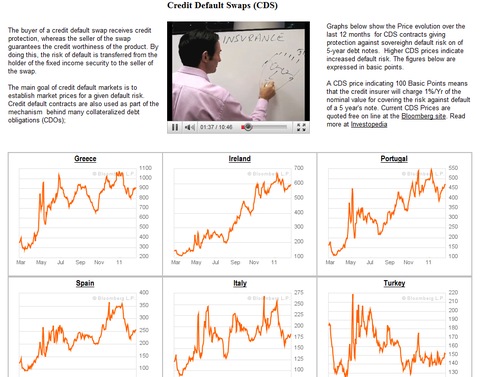