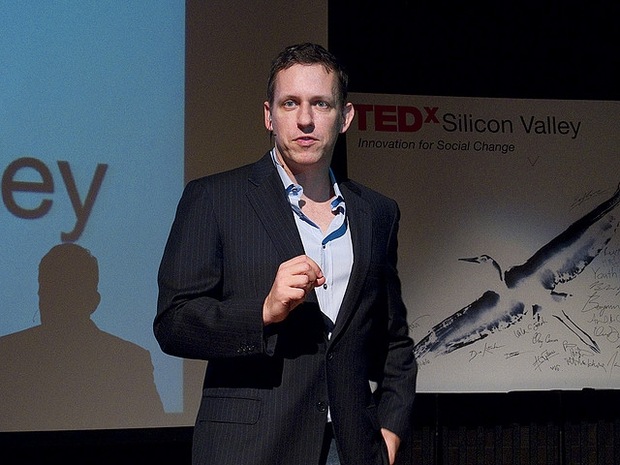 Paul Solman: Our friend Vivek Wadhwa, last seen on this page tolling the death knell for Microsoft, has been engaged in a long-running debate, some would say feud, with Peter Thiel, who in 2010 starting paying young people to drop out of college (or never enroll) and become entrepreneurs instead. So what’s become of Thiel’s experiment? Vivek shares his view of the results thus far.

Vivek Wadhwa: Frustrated that Silicon Valley’s entrepreneurs “were not focused on breakthrough technologies that will take civilization to the next level,” Peter Thiel announced the Thiel Fellowship in September 2010. He paid children $100,000 not to complete their college educations. His plan was to have them build world-changing companies instead of wasting their time at school burdened by “incredible amounts of debt.”

In an article that I wrote when I first heard about his idea, I pleaded, “Friends don’t let friends take education advice from Peter Thiel.” The best path to success is not to drop out of college, but to complete it, I argued. “Thiel’s experiment will increase the probability of success for the students he selects,” said Stanford Engineering Dean Jim Plummer, “because of the mentoring and the financial help they will receive.”

Indeed, with all the connections and hand-holding that they receive, the Thiel Fellows, Plummer and I expected, would achieve success exceeding that of other Stanford engineering graduates and dropouts — and of those in similar startup incubators like Y-Combinator and TechStars. We thought that because the deck was stacked, there would be many wildly successful Thiel startups.

The Immigrant Brain Drain: How America Is Losing Its High-Tech Talent

But three years later, I’m not amazed at any Thiel startups. The few successes lauded seem to be a mirage — or just plain silly. After all, is a “caffeine spray,” which Thiel Fellow Ben Yu developed with venture capitalist Deven Soni, a world-changing innovation that will “take civilization to the next level”? I don’t think so.

The best-known Thiel Fellow is Dale Stephens. What’s his greatest achievement? He got a book deal to talk about what he achieved by dropping out of school: getting a book deal. Stephens may have gained fame and fortune by persuading other children not to go to school, but that does not improve the world.

The much-hyped first exit of a Thiel company was the acquisition of GigLocator. Founder James Proud supposedly sold it for a six-figure sum. GigLocator aggregated information about artists and the venues where they played. But how is that different from the simplistic Silicon Valley startups that Thiel complains about? And on what basis does a company that was started in 2008 — three years before Proud joined — represent a successful Thiel Foundation exit?

And then there was the disastrous Airy Labs. According to TechCrunch, it wasn’t Thiel Fellow Andrew Hsu who ran the company; it was his father, mother and brother. No surprise. How can a child with no basic education and no business experience manage 20 employees and millions of dollars?
That’s not to say that there aren’t a few interesting startups listed on the Thiel Foundation’s website. SunSaluter, founded by Eden Full, built a prototype of a device that rotates solar panels to follow the sun.

Paul Gu is credited with co-founding a website, Upstart.com, to help people crowd-fund their education or business in return for a percentage of their future earnings or revenue. (Ironically, this values a person more highly for better education and pedigree.)

And Laura Deming was lauded for working on the development of a cure for ageing.
But Eden Full is back at Princeton pursuing a mechanical engineering degree (she said via email that others are still working on her product). It turns out that Paul Gu didn’t come up with the idea for Upstart but joined as a co-founder some ex-Google executives who had. And Laura Deming abandoned her research at MIT to become a venture capitalist instead.

There may be some great Thiel startups existing in stealth mode that I don’t know about. And it may well be that some Thiel Fellows achieve success on their second or third attempts. I certainly hope that is the case.

But the survival rates of Thiel startups pale in comparison with those emerging from TechStars, which provides hand-holding and mentorship as the Thiel program does. Of the 129 companies that TechStars (which publishes its success rates) has accepted over the past three years — in the same timeframe as Thiel — 98 percent are still in operation, and 69 percent were able to raise venture capital. Yes, we are comparing adults in the TechStars program with teen college-dropouts, and that isn’t a fair comparison. But wasn’t Thiel’s point that he could incubate his own Mark Zuckerbergs by saving children from the tyranny of college?

Three years is a long time in the technology world, and there should have been several notable successes from the batches of 20-24 students that the Thiel Foundation admitted. If Thiel had delivered what he promised, these startups should have all been in the category of “world-changing,” and a vast majority should still exist.

The reality is that a bachelor’s degree is an important foundation for success for most entrepreneurs. Yes, a few, such as Zuckerberg, Steve Jobs and Bill Gates, were able to achieve success after dropping out. But they surrounded themselves with very competent adults, and they were very lucky. All three have extolled the virtues of education and encouraged children to finish college. And their companies rarely hire college dropouts.

One good question Thiel often raises is whether you need to learn what’s taught in college. My dean at Duke University, Tom Katsouleas, has a great answer. He tells the story of a high school teacher whose students confronted him with the same question: “Why do we need to learn this?” The teacher replied, “You don’t. You need to learn to ask just one question.” The piqued students implored him to tell what that was. His answer: “Would you like fries with that?”

Sadly, for the vast majority of college dropouts, the opportunities are sparse. They won’t earn nearly as much as their friends who had the perseverance to finish what they had started. And if they do become entrepreneurs, the companies they start will be far less successful than those started by degree-holders.
After three years, Thiel’s experiment is beginning to prove that there are no shortcuts to success.

Let me suggest an alternative experiment to Thiel: fund disadvantaged kids from non-elite schools. Thiel Fellows such as Eden Full rave about the experience they had in the program. For them, this is a nice detour from their courses at elite universities. They can always go back to Princeton or Harvard without having lost anything. Why not give the same opportunity to children who are left out?

Hanging out with venture capitalists and industry moguls in Silicon Valley could be life changing for brilliant but poor children. Or better still, provide these children with scholarships so that they can complete their higher education and then fund their startups. I expect that this will have a far greater impact and will motivate many others to think big and help solve the world’s problems.

Editor’s note: We have sought a response post from Peter Thiel, which we hope to post soon.