The Two Faces of Dominique Strauss-Kahn

Dominique Strauss-Kahn was as urbane and well-mannered an interviewee as ever you’ll meet. Sensible and clear, as in a NewsHour interview during the heat of the Crash of ’08. Candid, as in another interview, one I did with him a year later. Unfailingly, ever-so-earnestly gracious: “exactly,” “you’re right,” “absolutely,” “yes, you’re right in saying that,” “Yes, exactly, exactly” — all in the course of our 8-minute interview. How much more right could I have been? 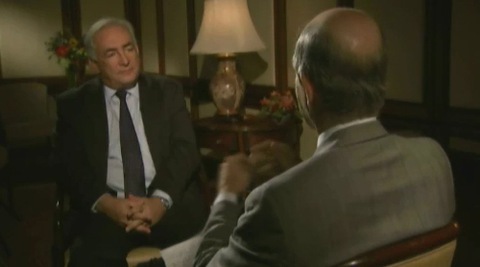 Paul interviewed Strauss-Kahn in September of 2009. Watch the interview here.

Nor did any of it seemed contrived. You felt in the presence of a thoughtful person of substance who took you seriously. No wonder commentators worldwide worry about the coordination of the global economy now that Strauss-Kahn languishes at Rikers Island.* Who will take his place? (His second in command had already announced his departure.) Who will keep economically fragile Europe together if not Strauss-Kahn, the French politician widely credited with helping craft the bailout trough for the desperate PIGS: Portugal, Ireland, Greece and Spain? The French Socialist and presidential frontrunner who gained the trust of Europe’s key player, Germany’s Angela Merkel?

And how wounded is the International Monetary Fund itself? I asked Strauss-Kahn about the IMF’s increased relevance after the Crash:

PAUL SOLMAN: You were becoming irrelevant, many people say, not you personally, but the IMF. You’re relevant again, aren’t you now?

DOMINIQUE STRAUSS-KAHN: Yes, it was a bit unfair. You’re right in saying that; that was a main comment made about the IMF two years ago.

But we were as irrelevant as firefighters when you have no fire. People may say, “What do we use to spend money for firefighters? There’s no fire.” And then the fire comes and you’re very happy about having the firefighters.

$3000-a-night hotel rooms and similar extravagances, not to mention a way with women that the New York District Attorney charges is downright criminal? Bad news for an international organization entrusted with billions of dollars by the world’s governments. Bad news for world financial stability, at least in the short run. Bad news for the PIGS, which have seen insurance on their bonds rise again in price the past few days, heading back perhaps to their all-time highs.

*-The New York prison is one scary place, says a cameraman friend who’s shot there.