NEW ORLEANS – Dorothy Williams has been standing for hours on the sidewalk in the New Orleans summer heat, waiting between thunderstorms for a free grocery giveaway.

The line of more than 50 people wraps around two blocks. The 63-year-old, wearing a t-shirt that reads “NOLA for Life,” pushes her portable grocery cart along as the line slowly inches forward.

One man in the line was so ill he leaned against a chain-link fence; several others were exhausted from the heat. Others have wagons, bicycles equipped with baskets, suitcases, and large grocery store carts to help carry food handed out by Culture Aid NOLA (CAN), a nonprofit that distributes free groceries twice a week to some 3,000 people.

Many come to the no-barrier, no-stigma food bank because it is open to all community members, no identification or other paperwork required. Visitors may also pick up goods for multiple families. It is a program that helps working families who make too much to qualify for traditional government food pantry assistance due to financial restrictions, along with undocumented immigrants and others who don’t have identification or the proper paperwork.

Williams said she’s not poor but needs help, especially with rising gas prices, high electricity bills, and record inflation squeezing her pocketbook. The free groceries mean she has money for other bills.

Williams has received food that “is really good and healthy” from the food bank, including vegetables, canned goods, brown rice, and wheat spaghetti, as well as supplies like laundry detergent and coffee.

“It really helps, especially when I don’t have to spend money on that stuff,” she said. 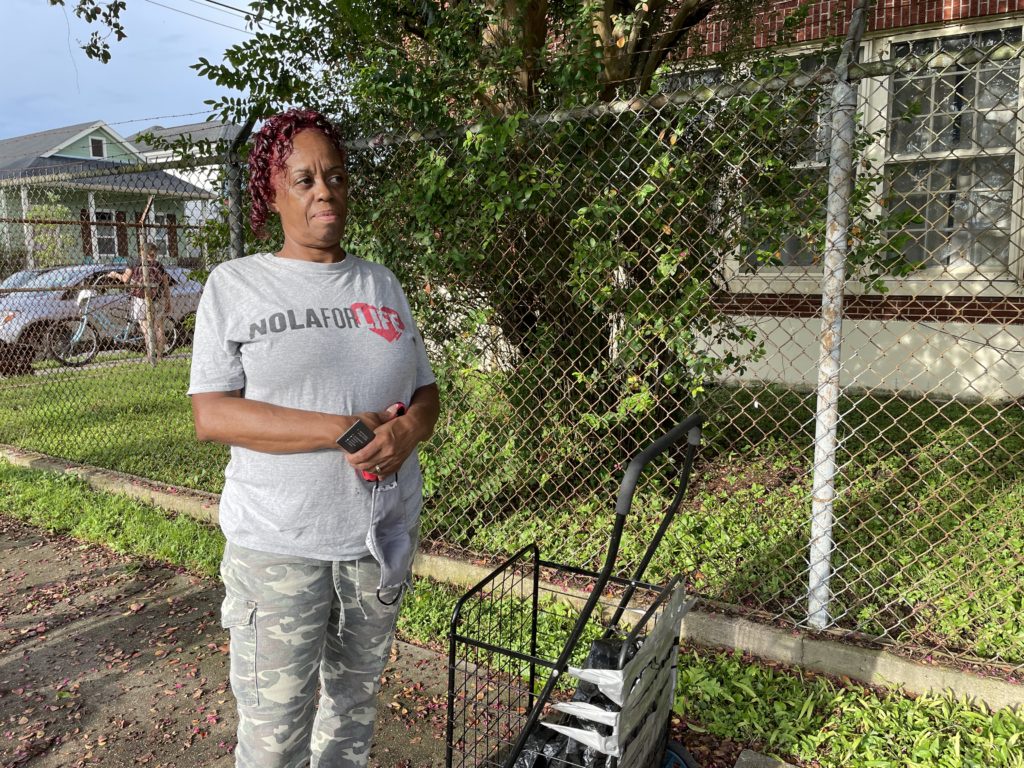 However, these days even the food banks in New Orleans are food insecure, struggling to meet the demand. This week, Williams and others will not be able to get as much food as in weeks past due to supply chain issues, inflation, and the high cost of transportation, food bank officials said.

For the first time since it opened its doors in 2020, CAN has had to put limits in place, turning people away, and canceling one distribution in July altogether because the food bank did not have any food.

“We are struggling at a time when there are more hungry people than ever.”

“There was not enough. We secured significantly less food than we usually do. We are struggling at a time when there are more hungry people than ever,” said Erica Chomsky-Adelson, CAN’s executive director. “We had to figure out: What are we going to do? How are we going to stretch these resources on our end to make sure that at least we can give something to as many people as possible? We actually just went out and straight-up bought vegetables, wholesale.”

In 2020, more than 17 percent of Orleans Parish households were food insecure, , giving New Orleans some of the worst numbers in Louisiana, according to the latest Feeding America’s “Map the Meal Gap” report.

Separately, nearly one in four Black households experience food insecurity, a finding that was captured for the first time in this survey.

Louisiana overall has the fourth highest rate of food insecurity in the nation, according to Feeding America.

Chomsky-Adelson said many who arrive for food are “working adults who can’t do it on their own.” 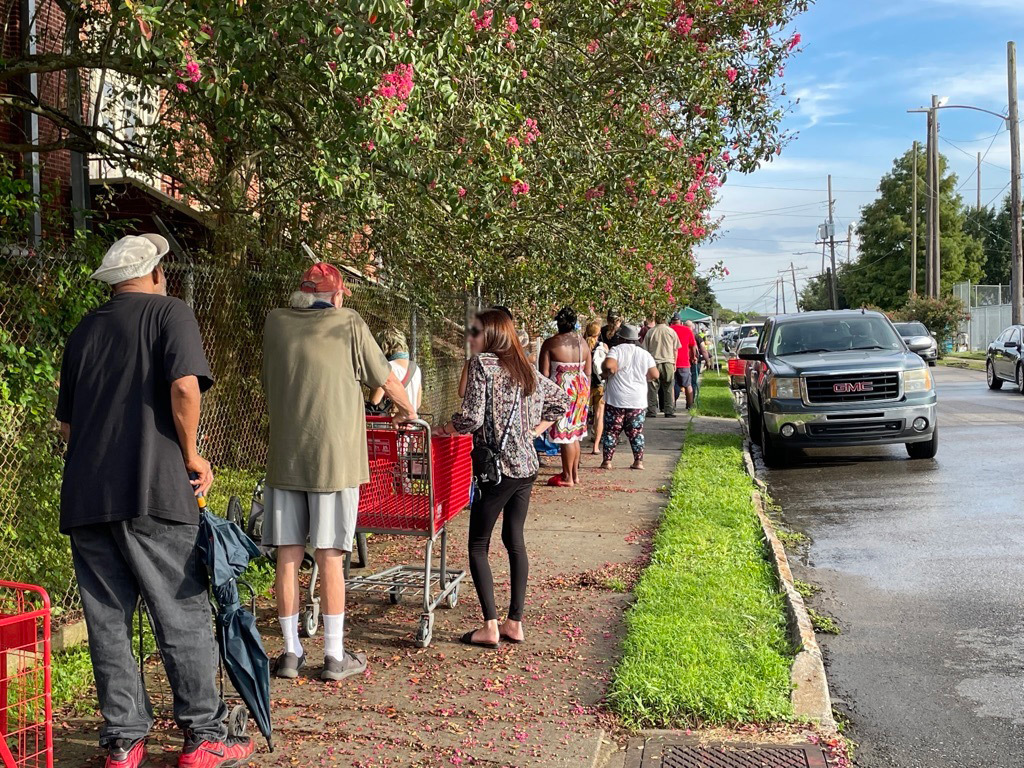 Guests wait in long lines for food handed out by Culture Aid NOLA, a nonprofit that distributes free groceries twice a week to some 3,000 persons. Photo by Roby Chavez/PBS NewsHour

Food insecurity is when people don’t have consistent access to enough healthy, nourishing foods. Studies have shown how food insecurity is associated with adverse health effects, including a higher risk of chronic diseases, in children and adults.

At the CAN giveaways on Saturday mornings and Wednesday evenings, people come in cars as well as on foot, and the line can stretch for a mile across multiple city blocks. Many drivers show up four to six in advance, and the food is gone within 30 minutes, said Ellie Duff, CAN’s operation manager. In April, she said the food bank turned away 30 cars a month, but by August, that number had grown to 86, including cars that may carry multiple families.

“I went to every car, and was explaining to people why we had to cancel, and multiple families told me that we weren’t the only food bank that had to cancel,” Duff said. “We are food insecure as well. The food insecurity is not only for individuals and individual families but across the nation for food distributions and food nonprofits.”

Amid national news of droughts, and fires, crops are not producing, “everywhere is really struggling,” she added.

The reality has been a gut punch for the organization. 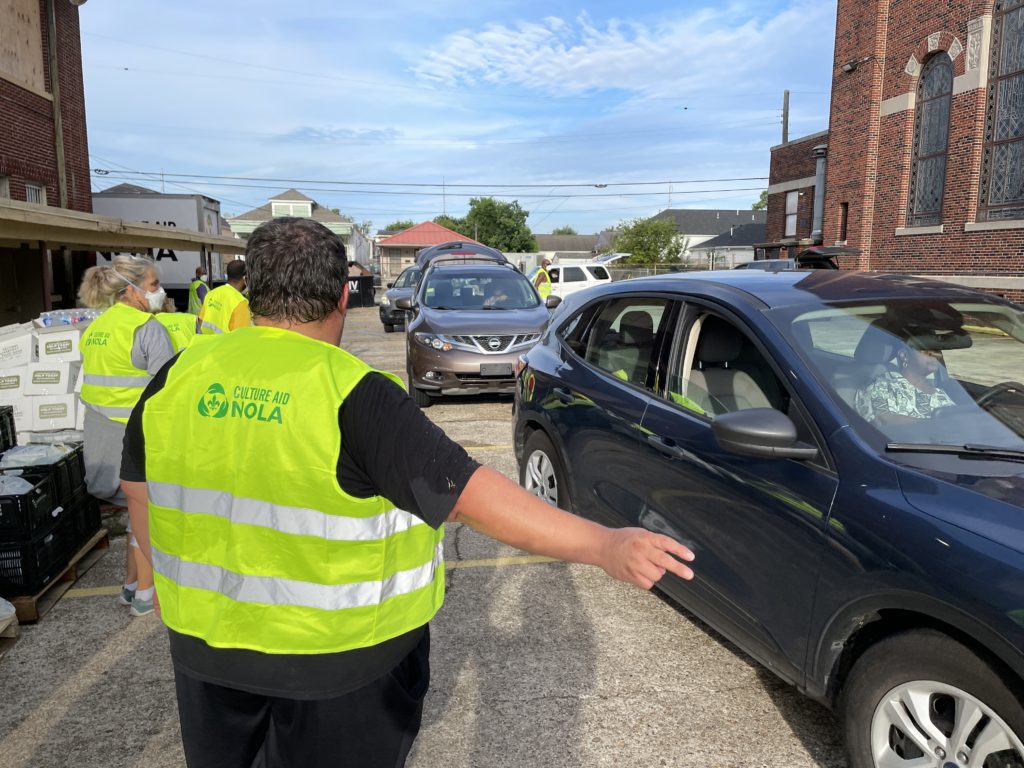 Caption: A Culture Aid NOLA volunteer directs a steady flow of cars at the no-barrier, food distribution as others load the vehicles with bags of grocery items. Photo by Roby Chavez/PBS NewsHour

Inflation, food costs, and poverty – and now the food bank shortfalls – are expected to make food insecurity in Louisiana worse.

One in five households in Louisiana is at risk of hunger. Chomsky-Adelson of CAN said that includes everyone from people without housing to working families needing emergency food assistance. With each economic fluctuation, there is a direct impact.

Food banks are “no longer short-term bridges for families; it’s a chronic emergency,” especially since the emergence of COVID-19, she added.

“We are seeing a lot of working adults who can’t do it on their own. We are pretty much the first defense against hunger in this city right now,” Chomsky-Adelson said. During the pandemic, “we had to look directly into the fact that there are far too many people out there who cannot miss $20 from their next paycheck without falling into crisis. That’s a lot more true these days for a lot more people.” 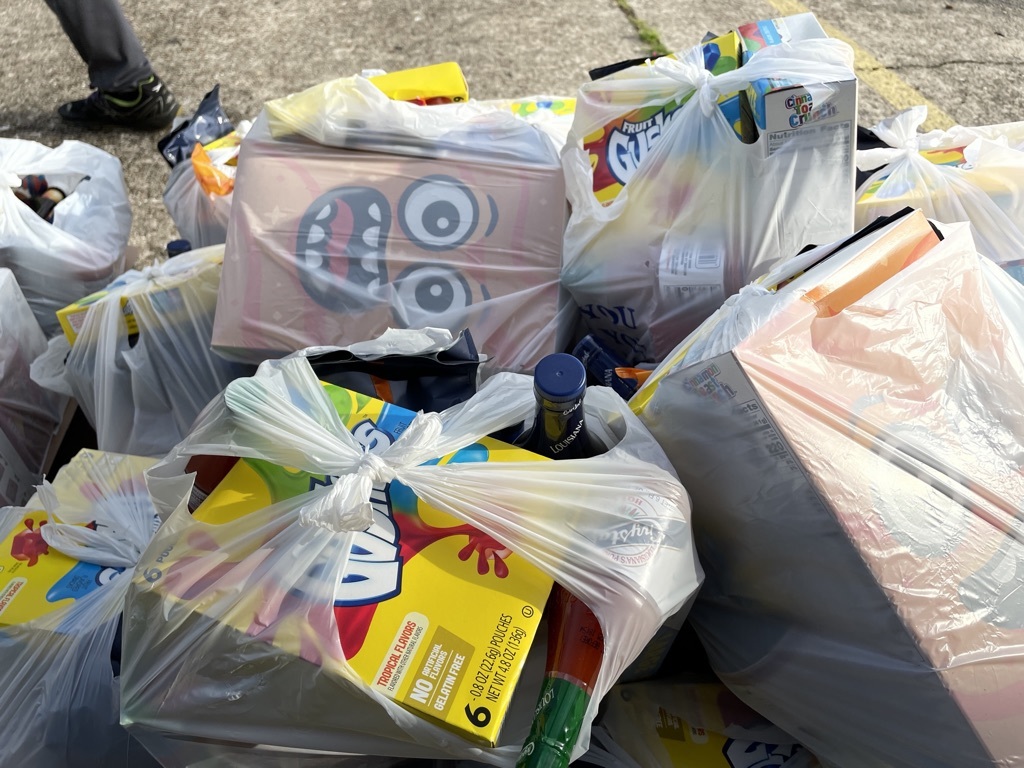 Bags of groceries are packed by volunteers for a food distribution. Some of the items, like kid treats and coffee are not received at traditional food pantries. Photo by Roby Chavez/PBS NewsHour

The Second Harvest Food Bank distributes food to individuals, but also feeds most of South Louisiana’s food banks, distributing 50 million pounds of food to 500 agencies across the state last year. Non-government donated bulk food, often coming from large-scale wholesalers, distributors and retailers, is often the most versatile food source food banks have, because it comes with fewer restrictions and no income requirements. But these kinds of donations have also suffered the most, Second Harvest officials said, because the companies who make them are more susceptible to the volatility of economic factors such as supply chain disruptions, inflation, and fuel costs.

At Second Harvest, the number of people seeking services has increased by 5 percent every month since January when inflation started rising. At the same time, the amount of donations Second Harvest has distributed decreased by more than 30 percent in the last several months.

“I guarantee you that every single person in this city knows someone who is hungry right now, whether they seem to be or not.”

“When you have so many chokes in the supply chain, those costs are hitting everyone across the board. Companies just can’t afford to take the risks to send it in the same way as they may have in the past; so, there is just less to donate,” said Lindsay Hendrix, Second Harvest Food Banks chief impact officer.

It doesn’t help that much of the federal money allocated during the pandemic has dried up, and food banks are footing more of the cost.

As a result, food banks like CAN are being forced to purchase more food as demand surges due to record inflation and other economic factors, which increase – not just need – but anxiety too.

“Hunger is here. It’s not somewhere else, and it’s not someone else. I guarantee you that every single person in this city knows someone who is hungry right now, whether they seem to be or not,” Chomsky-Adelson said. “One of the things that we’ve noticed is that our guests served does actually closely track to common markers of inflation. Very specifically, as gas prices rise, the number of families per car goes up. We know that they’re carpooling.” 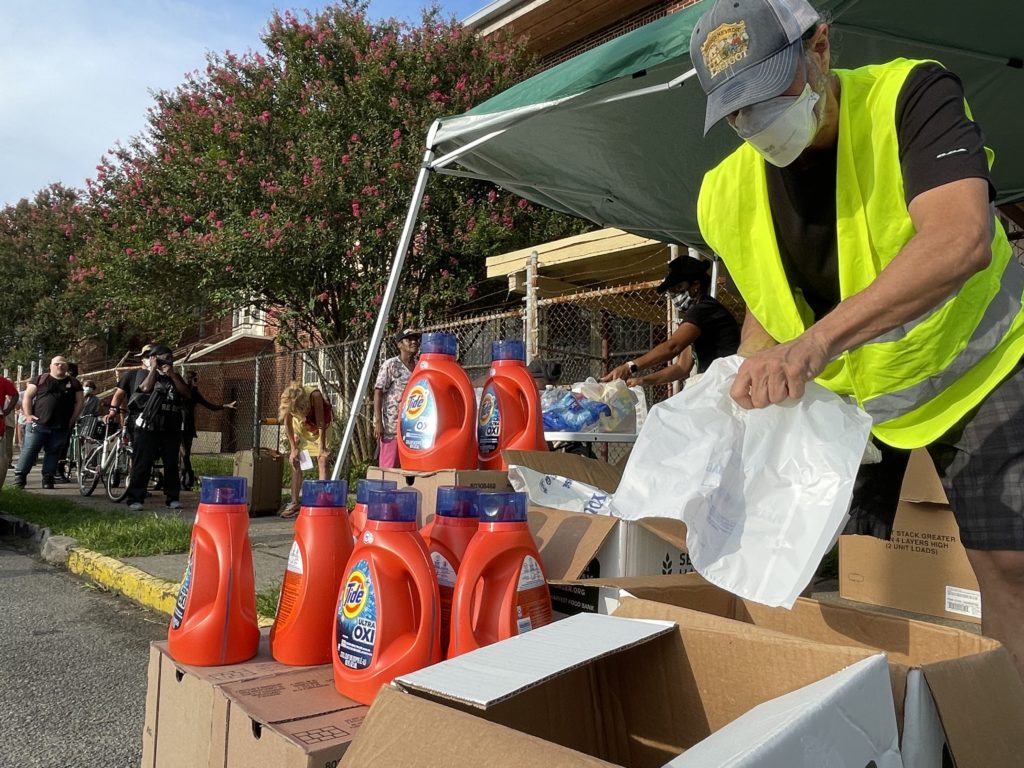 Along with healthy food, a popular item at the food distribution by Culture Aid NOLA is laundry detergent. Guests say the high-priced items help them save money, which can be used toward other bills. Photo by Roby Chavez/PBS NewsHour

While more families are turning to food pantries, hard decisions are being made on the ground at food distribution sites.

CAN previously had no limits on the amount of food one person could pick up. Some would deliver food to the elderly, sick neighbors, single mothers, or homeless people in their neighborhoods. Now it’s been limited due to the shortages. Despite the struggle, the work continues.

“We are still serving, still working, still fighting,” Chomsky-Adelson said. “We need money because if we have to go out there every week and actually purchase food wholesale, it adds up, but we cannot leave this many people behind.”

Back at the end of the line at the food distribution, things are surprisingly smooth. Volunteers sing and dance. Cars pull up with trunks open. Bags of food, cases of bottled water, detergent, and treats for kids are placed inside.

In the background, songs blare from DJ Siphne Aaye, who provides the beat for these tough times. On this day, the song “Lovely Day” plays for hungry New Orleanians, while volunteers do their best to keep it cheery despite the cutbacks in a city known for its food and food deserts.

“Everyone is just grateful and accepting for what we are able to give them,” Duff said as she stuffed several bags into a grocery cart. “People are very rarely upset that we’ve run out of food, and they understand that we are giving as much away as we possibly can.”

The PBS NewsHour’s Jenna Cohen contributed to this story.

Serving those in need and trying to survive during the pandemic