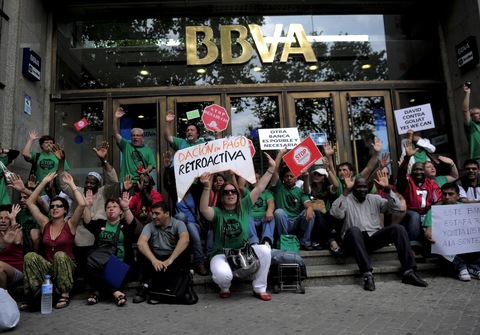 People take part in a protest in front of a BBVA bank office in Barcelona. Photo by Josep Lago AFP/Getty Images

This week here at Making Sen$e, we’ll be featuring dispatches from Europe’s financial front lines – mainly and plainly, the pain in Spain. Our first correspondent is Ana Westley, who has reported for the New York Times over the years.

She hails from New Hampshire, first visited Madrid as an exchange student in the 1960s, where she met and eventually married the prominent Spanish journalist Jose Martinez Soler, whose classmate I was in the Nieman Fellowship year 1976-77. Devotees of the NewsHour may remember them, and daughter Andrea, from the stories we produced in Spain two years ago, which you can find here and here.

I’m just back from the beach in Almería. Amazing to see all the ghost towns of seaside condos – all empty, all for sale with prices dropping continually.

Not only are the stories of two years ago truer than ever, but worse! What’s it like here? No one has any money to spare to even get out of Spanish banks.

> As an economics historian friend of JosÃ© commented: if this were the Middle Ages, Greece, Italy, Spain, and Portugal would now be part of Germany. Hmmm. Everybody bashes the Germans these days.

Capital flight. Every day there are headlines that investors are fleeing Spain. The amount of money leaving Spain since January has doubled compared to the year before. The explanation was that it was “mostly foreign investors,” not Spaniards. Yeah, well, pecunia non olet -“money has no bad smell,” one of Jose’s favorite quotes attributed to Roman Emperor Vespasian, who slapped a tax on the use of public latrines.

In the last two weeks, I have gotten emails from friends, and my son Erik in Los Angeles, asking us, or telling us, that we should get our modest savings out of Spain! Today we got an email from our financial advisor. Obviously he defends Spanish fund management companies versus foreign ones.

A friend of ours, who is an independent trader, told us about a year before the crisis that most Spanish savings banks were bankrupt and that it would be a matter of time. Another friend of Jose’s, a former government minister in the early days of the Spanish transition when there was major bank restructuring, also warned a couple years ago that Spanish banks had a problem of liquidity, but that if that wasn’t solved, it would turn into a problem of solvency. That’s what’s happening, I guess.

Everyone here is blaming much of the deficit on the extravagant spending –and flagrant corruption– of the autonomous provinces and local city halls: airports that have never opened, redundant universities, huge bridges over small gullies, grandiose community sports and cultural centers, Expos, super (toll) highways that are now practically empty, especially along the coasts. All the major works, of course, meant illegal commissions to finance political parties, difficult to prove but widely believed. And when you are doing under-the- table commissions, the temptation to keep some for yourself is pretty irresistible, so it seems.

Everyone knows there was a lot of extravagant spending. Madrid and Valencia were the worst and the most indebted. Both have been under conservative Popular Party governments for the past 15 years and were the center of major corruption scandals. Ditto for socialists who have governed Andalusia since the beginning of democracy, but in the last regional elections in March had to form a coalition with the United Left. All governments in power – especially local and regional – are now viewed as extravagant over spenders prone to corruption. 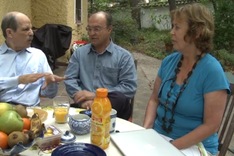 All the spending and corruption was based on the booming real estate bubble. There was a cartoon in El PaÃ­s a few months ago that really summed it up. Two men are taking a walk in a small town. One, the mayor, says to the other: “How am I going to tell my 26 relatives that I have to lay them all off because of the austerity plan?” No one really knows how much of the huge debt run up by local and regional governments were contracts handed out, without any public bidding, to companies of relatives or friends, or to companies willing to provide political party financing.

Many of the protests going on seem like from another era. I’m not talking about the Indignant Ones, Spain’s Occupy Movement, but, for example, the miners from the northern mining province of Asturias. Coal mining is practically a mono product there and has always been heavily subsidized, despite its poor quality and high cost. It’s cheaper to import superior coal from Poland. No government has dared restructure there, however, because it’s the only industry. So now, the day of reckoning has arrived with austerity cutbacks and the government wants to restructure the mines. The miners and families are outraged and demand that they be able to continue mining– and their children’s children for ever and ever. I have a problem when I hear some of the interviews with the miners on TV– they are walking to Madrid with their shovels and picks, head lanterns, wives and children, and grandparents. One wife said, “our grandfathers and fathers before us, our husbands, our brothers, our sons have always worked in the mines and we demand our children be able to do so too…If they close the mines we will all have to leave our home towns…” Yeah, well, why are they so special when the steelworks, shipyards, and mines in other parts of Spain were closed or drastically restructured in the early 1980s and those workers were laid off –back then with generous payouts? So often you hear this entitlement attitude or that corporations, and mining companies, are some sort of NGO. I’ve heard, over and over again, people complain when a multinational shuts down and moves to another country saying things like, “Oh, X Corporation, all they were interested in was making money.” Um, duh. People don’t understand capitalism on a very basic level and seem to think that multinational companies have a moral obligation to keep putting in more good money over bad. That said, multinationals that want to pack up and go must first fulfill their contract obligations. I must sound like a right-winger, which I am not, but sometimes I’m really surprised at these old attitudes of guaranteed employment for life in what you have always done and resistance to moving out of the town where you grew up. But young people are moving out of the country on a huge scale, as we already discussed. The best and the brightest leave.