How Bad Is the Current Stock Crash? 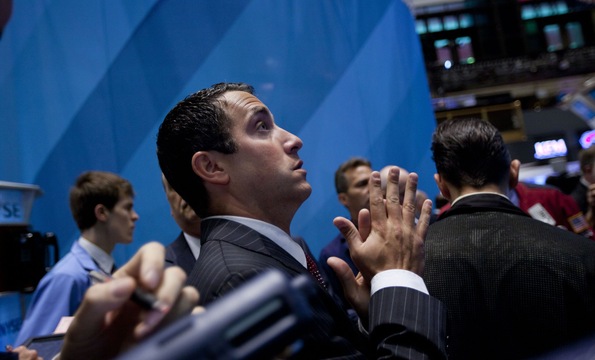 Traders work on the floor of the New York Stock Exchange on Thursday. Photo by Jin Lee/Bloomberg via Getty Images

Editor’s Note: Given the rollercoaster behavior of the stock market over the past few weeks, we checked in with historian Richard Sylla, who teaches economics at New York University. We asked the professor, who focuses on the history of the markets, to help us put the recent sharp ups and downs in context.

NewsHour: Comparing the market turmoil of the last couple weeks with other historic falls, how does this stack up to 2008, the Depression and others?

Richard Sylla: U.S. stock indexes are now, as of Aug. 10, down about 16 percent from their levels three weeks ago. In the first month of the 2008 panic, when Lehman failed on September 15, indexes fell more, about 25 percent. In the great crash of 1929, from Oct. 24 to the second week of November, or about three weeks, the drop was roughly 33 percent. And we ought also to remember that on Oct. 19, 1987, stocks dropped about 22 percent in one day. So thus far the current crash isn’t so great as several other memorable ones. 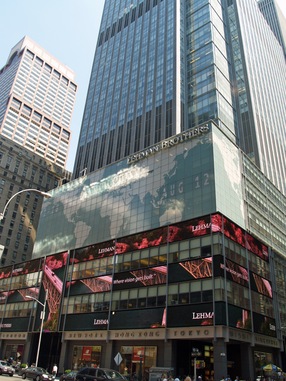 NewsHour: Has history shown multiple types of outcomes after a crash? Can we expect one type of outcome from this?

Richard Sylla: The 1987 crash was one type of outcome. Overall, stock indexes were down about 37 percent from their peaks in August (when the Fed raised its target rate), but most of the decline occurred on that one day of Oct.19. The 22 percent drop that day more or less marked the end of the crash.

The “Great Crash” of 1929 wasn’t so different from 1987. But most people learned from their teachers and their history books that the 1929 crash was a cause of the Great Depression. Left out of this story is that between the lows of November 1929 and April 1930, stock indexes regained almost all the ground they lost in the October 1929 crash. Most likely the Great Depression began a year after the 1929 crash, when a lot of banks failed toward the end of 1930. Those bank failures, which were followed by more in 1931, 1932 and 1933, had very little relationship to the crash of 1929.

Another possible outcome is for a crash to occur after a period of orderly retreat from previous highs, and then after the crash seems over and the markets stabilize, a further decline occurs. From the market peak in October 2007, stocks dropped about 19 percent — not quite a bear market — to Sept. 12, 2008, the Friday before Lehman went under. After Lehman, stocks fell 25 percent over the next month, they then fell another 24 percent to March 9, 2009. Overall, stocks fell 52-53 percent from October 2007 to March 2009. (Because of changing bases in the calculations, one can’t simply add up the percentage declines in segments of a crash to get the overall percentage decline.) 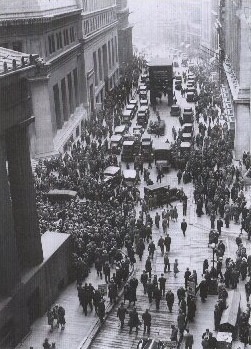 Photo at right: A solemn crowd gathers outside the Stock Exchange after the 1929 crash. Public domain photo via Wikimedia Commons.

NewsHour: How significant a correction are we in? How does it compare to a bear market? What’s the difference?

Sylla: So far it’s a correction, defined as a drop of 10 percent but less than 20 percent from a recent previous peak. So far we are down 16 percent. If that becomes 20 percent or more in the days ahead, people will say we have gone beyond a correction into a bear market.

NewsHour: We hear about the so-called VIX level – what is it? How does it compare with other turbulent times?

Sylla: VIX is the symbol for a “Market Volatility Index” that attempts to forecast how much the S&P 500 stock index will change in the month ahead based on the behavior of options prices on the S&P index. VIX goes up when the options prices indicate traders expect big changes in the stock index in the month ahead, and it comes down when only moderate or low changes in stock prices are expected in the month ahead. In times like now, the VIX goes up. Sometimes it’s called the fear index, because a high and rising VIX could indicate that stocks are expected to fall a lot over the next month. But in principle, VIX is symmetric — it could also indicate that stocks are expected to rise a lot over the next month.

NewsHour: There’s been a lot of talk about a double-dip recession. What do we know, historically, about how accurate or not markets are at forecasting this type of phenomenon?

Sylla: There aren’t many documented cases of double-dip recessions in U.S. history. The 1930s are sometimes said to be one because after the Great Depression of 1929-1933, the economy went into a bad recession in 1937-1938 before it had recovered fully from the earlier depression. But in between, from 1933 to 1937, there had been a strong recovery from the Depression’s depths, so most students of this subject consider it two separate downturns, not a double dip.

Are the markets forecasting a double dip this time? They could be, because if we turn down again now, it will be happening before the economy has fully recovered from the last recession which ended in 2009. That would be like the 1930s in a way, but I think our current recovery from 2009 to the present has actually been more anemic than the recovery from 1933 to 1937.

But the market is not an infallible forecaster. As the late great economist Paul A. Samuelson famously said, “The stock market has forecast nine of the last five recessions.”

NewsHour: Should we be buying? Selling? Staying put? In other words, what should non-professional investors be doing?

Sylla: The answer depends on one’s expectations of what is likely to happen. If you think it’s like 1987 again, where the steepest declines we’ve seen in recent days are marking the end of the sell-off, you would be tempted to buy now, and certainly you would not want to sell.

But if you think it’s like the month after Lehman’s failure, despite the recent decline you would expect more declines to come in the weeks and months ahead. So you would certainly not buy and would be tempted to sell.

In general, non-professional investors who don’t have a clue as to what is likely to happen probably ought to stay put, especially if they are young and can wait for the markets to recover, as they always do. Such investors are often highly tempted to do the wrong thing, to buy at high prices when prices are going up, and to sell at low prices when prices are going down. Buying high and selling low is a bad strategy!

Non-professional investors ought to buy in at regular intervals, and get on with their lives without paying very much attention to the market’s short-term antics. If they are a little sophisticated, they ought to re-balance every now and then, which essentially means that they ought to sell stocks when they have gone up a lot, and buy stocks when they have gone down a lot. Buy low and sell high is a strategy that makes sense.

Since stocks have gone down a lot, but not nearly as much as in previous drops, one might be tempted to buy now. I moved some money from cash to stocks at the close on Monday. On Tuesday I felt pretty smart. On Wednesday, I felt less smart … or worse! I’ve been doing this for a long time, so I’m used to it. I’m pretty sure I’ll feel better down the road than I do today. After all, I bought stock that’s 16 percent cheaper than it was three weeks ago. If stocks get cheaper still in the period ahead I plan to buy some more of the bargains Wall Street keeps offering. It’s re-balancing, a good strategy in the long run.

Sylla: Like Paul, I regularly suggest TIPS when asked for an investment most people should have in their portfolios, say 5 or 10 percent of the portfolio. The Fed has told us that their goal is to have about 2 percent inflation a year, and the deviations from that are usually on the upside. The last century was a century of 3 percent inflation overall, and 3 percent inflation causes money to lose half of its value in 24 years.

Recently, a well-known Harvard economist called for raising the inflation target to 4 percent or more as a way of reducing the burdens of debt, our own and the government’s, in order to speed up the recovery. Debasing the currency used to be considered as one of the sinful behaviors of absolute monarchs such as Henry VIII, king of England, long ago. Now in our democracy, it is official policy with noted economists recommending even more of it. Go figure.

And buy some TIPS if you don’t have any in the portfolio now. Not because I say so, but because Paul does!