WASHINGTON (AP) — The United States added 1.8 million jobs in July, a pullback from the gains of May and June and evidence that the resurgent coronavirus is weakening hiring and the economic rebound.

Many employers have been reluctant or unable to hire, with about two-thirds of the nation having paused or reversed reopening plans early last month. Even counting the hiring of the past three months, the economy has recovered only about 42% of the 22 million jobs it lost to the pandemic-induced recession, according to the Labor Department’s jobs report released Friday.

The acceleration of the viral outbreak that began in late June more than doubled the daily U.S. confirmed case count by mid-July. The rate of new reported cases has since declined. But the outbreaks have led many states and cities to close bars and other businesses for a second time and have dampened confidence, causing many consumers to limit their shopping, traveling, eating out and gathering in crowds.

July’s job gain was much lower than June’s 4.8 million and May’s 2.7 million jobs added, both of which were revised slightly.

Hiring was weaker in a range of industries last month. Manufacturing added just 26,000 jobs, less than one-tenth its June gain. Restaurants, bars, hotels and entertainment venues gained 592,000, just one-quarter of the June increase. Retailers added 258,000 jobs, down from more than 800,000 in June.

Many employers have been reluctant or unable to hire, with about two-thirds of the nation having paused or reversed reopening plans early last month.

The economy is struggling to emerge from the devastating recession that caused the economy to shrink at a nearly 33% annual rate in the April-June quarter, the worst quarterly fall on record. Employers slashed their work forces, consumers cut spending and corporations pulled back on investment and expansion.

The economy has since started to grow again, and many economists have forecast a solid rebound in the July-September quarter, though not nearly enough to offset the second quarter’s dizzying fall.

Friday’s report showed that 16.3 million people were unemployed in July — nearly triple the 5.9 million who were out of work before the pandemic. For people eligible for state unemployment aid, weekly checks average $375, after a supplemental $600-a-week federal benefit expired last week.

The loss of the $600 check has shrunk benefits for America’s unemployed by one-half to three-quarters, causing hardship for many. Analysts say the federal aid provided vital fuel for consumer spending and the overall economy, which depends on such spending. Its expiration could cause a wave of evictions as up to 23 million Americans struggle to pay their rent and mortgage payments. 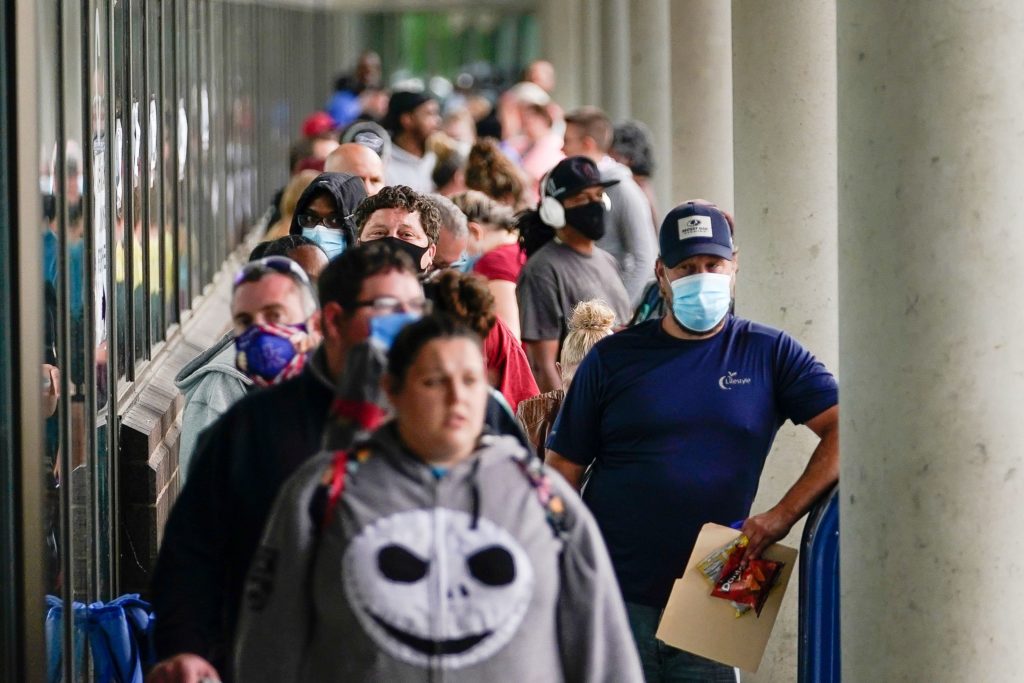 Hundreds of people line up outside a Kentucky Career Center hoping to find assistance with their unemployment claim in Frankfort, Kentucky, U.S. June 18, 2020. REUTERS/Bryan Woolston

Congressional Democratic leaders and the White House have been negotiating an extension of the unemployment aid. But progress has been limited, and the two sides might not reach a deal before Congress begins an August recess next week. Even if a deal can be forged, any new federal jobless benefit would likely be less than $600.

In the meantime, some employers are adapting to the pandemic by doing business with fewer workers than they formerly employed.

Peter Klamka, owner of the Blind Pig restaurant in Las Vegas, has converted his sit-down restaurant to mainly pickup and delivery orders. His restaurant, whose revenue had plummeted along with tourism, relies mainly on roughly 1,200 condos and apartments located nearby.

MORE: Should Congress extend the additional $600 per week in unemployment?

Still, Klamka is using data he has gathered from online and mobile ordering to fine-tune his menu and prices. He knows, for instance, that if he drops the price of a pizza by $2 on a Friday night, he’ll attract perhaps 25 more orders. Armed with such knowledge, he can tweak his inventories and staffing.

So far, Klamka says, it’s working well enough that he plans to buy three or four more restaurants in Las Vegas and Los Angeles, which he expects to acquire at bargain prices.

Yet he doesn’t expect to do much hiring. He is operating the Blind Pig with just five employees, down from 25 before the pandemic. He plans to operate any new outlets the same way.

Left: The United States added 1.8 million jobs in July, a pullback from the gains of May and June and evidence that the resurgent coronavirus is weakening hiring and the economic rebound. File photo by REUTERS/Lucas Jackson