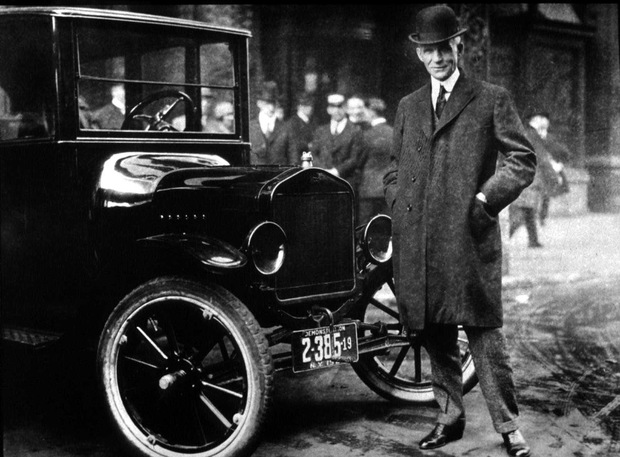 Tuesday marks the 150th birthday of the great American industrialist Henry Ford — genius of manufacturing, pacifist, friend of the working man (though not of unions), friend of the Nazis, enemy of the Jews. You don’t need me to tell the Ford story; the Wikipedia entry seems as good a place as any to start.

Of special interest to me, though, has been Ford’s virulent, proselytizing anti-Semitism, as written and published in his own newspaper, the Dearborn Independent, in the 1920s, though Ford later tried to disavow it. I would strongly recommend its most famous “essay” — “The International Jew” — to anyone who wishes to understand the 20th century antipathy toward Jews as an economic and cultural force.

And that brings us to Leo Franklin, Michigan’s most famous rabbi in the early 20th century, who happened to live on the same block as Ford in the early 1910s and became his friend. Rabbi Franklin is the trigger for this post because, while shooting ancillary material for our series on older workers, an interviewee of ours, political science professor Ronald Stockton, happened on Franklin’s gravestone. Stockton tells the story (condensed and edited for clarity) below:

Rabbi Franklin was one of the founders of the Anti Defamation League and he was probably the most famous rabbi in America at that time. He died in 1948. It’s interesting, this is the family stone, and all it says is, “Leo Franklin, beloved husband of Haddie.” What a modest man, you know. He’s the most famous rabbi in all of North America and all his stone says was, “I had a great wife.”

But I think this is kind of a lesson we learn in a graveyard: that we may be the most famous person in the country at one time, but 50 years later, nobody is going to bother to clean off our stone except some obscure professor who happens to admire us.

Back then, Franklin’s neighbor Henry Ford also admired him and would send him a new car once a year. Stockton picks up that part of the story:

But for 52 weeks in a row, (Ford’s newsletter) ran text on Jewish corruption. So when the car appeared one day and one of Ford’s drivers said, “Well, Rabbi Franklin here’s your new car,” Franklin replied, “I’m not accepting it.” So Henry Ford called him and said, “Rabbi, has something come between us?” And Franklin said, “Yeah, you’re attacking Jews. I can’t accept anything from you.” And Ford said, “No, I’m not attacking Jews, I’m attacking bad Jews. I would think you’d be supportive of that.”

That sentiment is very similar to anti-Islamic things people say today. They’ll say, “Well, I’m not attacking all Muslims, I’m just attacking the terrorists, and you’d think that the good Muslims would join in and condemn them along with me.” And then there’s the (pressure) that if you don’t condemn them then you’re a part of them. That was the same sort of logic that was used (during Ford’s time).