What is an endangered species worth? Trump rule sparks debate

What is the cost to the economy when an animal is listed as an endangered species? The Trump administration could soon start to publicize that calculation, along with the cost and benefits of categorizing an animal that way, under new rules it finalized earlier this month.

Trump officials said they will not use the new rule to determine whether a species is listed — federal law requires that decision to be based solely on scientific data. Instead, the Fish and Wildlife Service and the National Oceanic and Atmospheric Administration, which implement the Endangered Species Act, said the information would be used to better inform the public. Economic analyses are already included when specific plans are made to protect a species.

Habitat loss is widely considered the number one threat to endangered species, so saving a species usually requires the protection of large swaths of land.

That land often includes natural resources, such as trees that can be logged or water used for agriculture, that are considered natural capital. When those resources are used unsustainably, they often generate more money in the short term (more trees are being logged and sold, for example), but less money in the long term (when there are no more trees to be logged).

Environmentalists caution that calculating costs and making them public could influence, even subconsciously, whether government officials list a species, saying the Trump administration already has a track record of siding with businesses and rolling back environmental protections.

The new rule has, in a sense, already had an effect, by raising debate over how Americans should determine the value of a species and whether it is possible to accurately weigh the costs and benefits of keeping plants and animals from going extinct.

How much would you pay to save a species?

For decades, environmental economists have asked Americans how much they, personally, would pay to preserve a species.

Some Americans are willing to pay up to $167 per household per year to preserve salmon, for example, $54 for the bald eagle and $14 for the Florida manatee, according to various studies.

But those values are largely arbitrary and say more about public perception that a species true value. Responses tend to depend on whether a person lives close to the plant or animal’s habitat, whether an animal is popular and whether the species is known to have financial benefits, such as fish that are caught and sold as food. 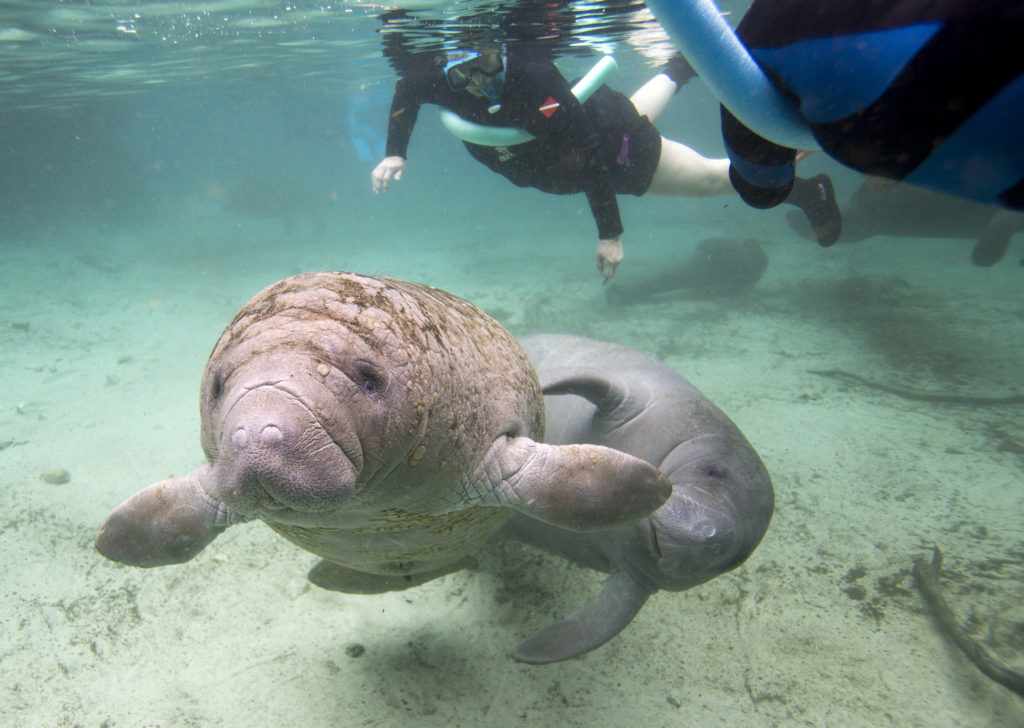 Florida manatees swim in the Three Sisters Springs while under the watchful eye of snorkelers in Crystal River, Florida on January 15, 2015. Photo by Scott Audette/Reuters

Analyzing data that is more concrete than, say, your feelings about the manatee can be complicated.

“The important thing is measuring not just the costs, which are obvious and easy to measure, but also the benefits, which are harder to conceptualize and measure,” said Christian Andres Langpap, a professor of applied economics at Oregon State University.

If a company is required to stop or scale back a project in order to preserve a habitat, for example, analysts can count up the number of jobs lost and additional money spent. But calculating how much money is saved decades down the road if a species’ habitat is left in tact is more difficult.

Here’s what we do know.

Federal and state agencies spent $1.5 billion on endangered and threatened species in fiscal year 2016, according to the most recent data available. The total price tag is likely substantially larger because that number does not include the cost other agencies incur to comply with the Endangered Species Act or the lost value to landowners and businesses who could make more money off their land if not for related restrictions.

Industries often produce their own estimated costs for species protection. In a debate over protecting the spotted owl in the Northwest, one logging industry estimate found protection would cost Washington state $94.6 million in wages annually.

But some of those claims do not hold up to scrutiny, and environmental groups say those estimates should be weighed against another kind of cost: the loss of our natural capital.

“Everytime we drain a wetland or cut down a forest, there are a lot of consequences that follow,” said Steve Polasky, an environmental economics professor at the University of Minnesota. 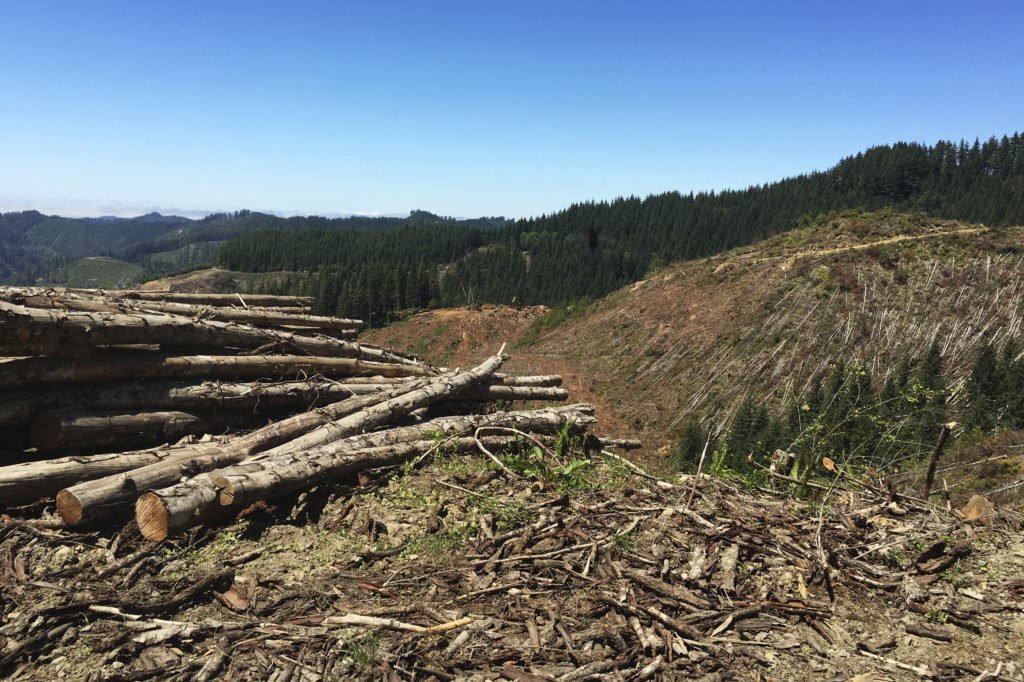 A logging clear-cut on the outskirts of the Elliott State Forest is shown in southwest Oregon, on July 27, 2016.
Logging forests unsustainably can lead to a loss of natural capital. Photo by Eric Johnson/Reuters

The decline in bees, butterflies and other pollinators, for example, could cost farmers between $235 billion and $577 billion in crop loss each year, according to a report that Polasky co-authored and that was produced by the international Intergovernmental Science-Policy Platform on Biodiversity and Ecosystem Services, which is made up of more than 100 governments supporting biodiversity.

The extinction of plant species that could have been used for medicinal purposes would mean companies lose out on billions of dollars in potential profits, not to mention the loss of human lives. Bats, which count among them many endangered species, provide $1 billion worth of pest control for crops globally.

Calculating the indirect benefits of saving a species is more difficult because “we often are not really taking into account how interconnected species are,” said Lynn Scarlett, vice president of policy at The Nature Conservancy.

A small fish might not have many direct benefits for humans, but it is part of an enormous food chain. The extinction of the smaller fish could affect our seafood supply or be devastating to larger animals, such as dolphins, that people generally value more highly.

How economics could save both money and species

When deciding how to protect a species, Scarlett said wildlife officials should ask a series of questions that take costs into consideration. During the George W. Bush administration, she served as the chief operating officer and then acting secretary of the Department of Interior, which oversees the U.S. Fish and Wildlife Service.

Scarlett said it’s “just good government” to weigh whether some actions might be more effective and cost-effective than others.

But she cautions that there is a difference in determining what plans are most cost-effective and deciding whether a species is worth saving, which she fears the new Trump rules could encourage.

Others disagree that the Trump rules will damage species.

If businesses and private citizens know the economic impacts of listing a species as threatened or endangered they might “take voluntary conservation actions before a species is listed that could avoid the need to list altogether,” said Tyson Kade, a lawyer who counsels companies on Endangered Species Act compliance issues with the Washington, D.C.-based firm Van Ness Feldman.

More companies have been building environmental costs into their business models, as evidenced by the increased hiring of “sustainability officers.”

But environmental groups are skeptical that businesses, which often oppose environmental regulations, would be proactive about preserving ecosystems, no matter the long-term costs.

Left: A grizzly bear roams through the Hayden Valley in Yellowstone National Park in Wyoming, May 18, 2014. Grizzly bears are currently listed as a "threatened" species, although the Trump administration has moved to remove them from the list citing rising population numbers. Photo by Jim Urquhart/Reuters