Is Obama’s Climate Change Policy Doomed to Fail? Maybe Not. 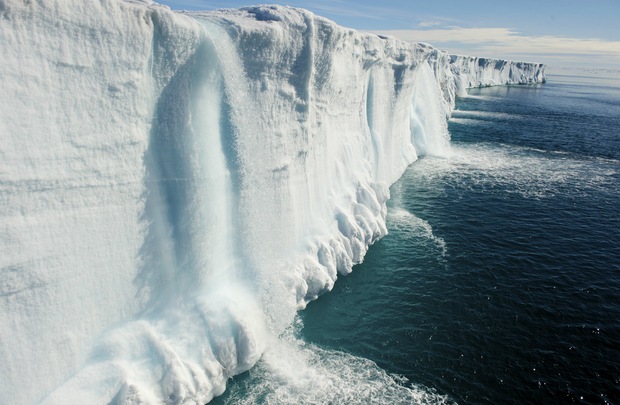 Until there is an obvious, sudden and perhaps cataclysmic event, such as a loss of part of the Antarctic ice sheet, the odds would seem to be stacked heavily against climate change legislation, says Harvard’s Rob Stavins. But the picture is not nearly so dark as one might think. Photo by KEENPRESS/Getty Images.

A Note from Paul Solman: A professor of envinromental economics at Harvard’s Kennedy School of Government, Rob Stavins is one of the country’s leading thinkers on climate policy. Climate wonks regularly read his blog, One Economist’s Perspective on Environmental and Natural Resource Policy, as do I.

In the wake of President Obama’s strong push for action on climate change during his second term, I asked Rob to comment for a broader audience here at the Business Desk. He was kind enough to do so.

Rob Stavins: In his 2013 inaugural address, President Obama surprised many people, including me, by the intensity and the length of his comments on global climate change. Since then, there has been a great deal of discussion about what climate policy initiatives will be forthcoming from the administration in its second term.

Although I was surprised by the strength and length of what the President said, it did not change my thinking about what we should expect from the second term. I would say the same about the President’s State of the Union address.

What are the top priorities for environmental policy during the second term?

What are the roadblocks that would prevent the President from addressing these priorities?

The key challenge is the unprecedented degree of political polarization that has paralyzed both houses of Congress. The numbers are dramatic. When the Clean Air Act Amendments of 1990 that established the landmark sulfur dioxide (SO2) allowance trading system were being considered in the Congress, political support was not divided on partisan lines. Indeed, environmental and energy debates from the 1970s through much of the 1990s typically broke along geographic lines.

In 2009, the House of Representatives passed the American Clean Energy and Security Act, known as the Waxman-Markey Bill, that included a nationwide cap and trade system to cut carbon dioxide emissions. That bill passed by a narrow margin of 219-212, with support from 83 percent of Democrats, but only 4 percent of Republicans.

Can we expect political polarization to be reversed over the next four years?

My answer is no: I predict we will continue to see partisan politics and politicians.

First, there’s the increasing importance of the primary election system, which favors those who vote in the primaries: the most conservative Republicans and the most liberal Democrats. This self-selection favors candidates from the extremes.

Second, decades of redistricting have produced more districts that are dominated by either Republican or Democratic voters, which further increases the importance of primary elections.

Third, geographic sorting of like-minded households has furthered this trend.

Fourth, the increasing cost of electoral campaigns greatly favors incumbents, with the ratio of average incumbent to challenger financing now exceeding 10 to 1. This makes districts relatively safe for the party that controls the seat, thereby further increasing the importance of primary elections.

The Great Recession of the past several years, like the Great Depression of the 1930s, has undoubtedly increased the ideological divide. We can hope that better economic times will reduce the pace of polarization. But in the face of the four structural factors, it is difficult to be optimistic about a reversal of Congressional polarization.

Will there be openings for compromise and progress on climate change policy in President Obama’s second term?

Some policy wonks have been saying that the time for a national carbon tax is at hand. Does the defeat of cap and trade in the Congress, combined with the virtual unwillingness over the past 18 months of the White House to utter the phrase “cap and trade” in public, together presage serious political consideration of a carbon tax?

The good news perhaps is that a carbon tax is not “cap and trade.” That presumably would help with the political messaging. But if conservatives were able to tarnish cap and trade as “cap and tax,” it surely will be considerably easier to label a tax as a tax.

Also, note that President Obama’s silence extends beyond disdain for cap and trade. Rather, it covers all carbon pricing regimes. In his State of the Union, the president said: “I urge this Congress to pursue a bipartisan, market-based solution to climate change, like the one John McCain and Joe Lieberman worked on together a few years ago.”

But if Republicans and Democrats can cooperate to address the short-term and long-term budgetary deficits and decide to increase revenue as well as cut government expenditures, then there could be a political opening for new energy taxes, such as a carbon tax. Still that is a big if.

Those who recall the 1993 failure of the Clinton administration’s BTU tax proposal, with a much less polarized and much more cooperative Congress than today’s, will not be sanguine.

What’s the prognosis for action on climate change?

This may sound like an exceptionally poor prognosis for meaningful action. But in fact, I am confident that there will be climate policy action. Note that in his State of the Union Address, immediately after urging that Congress take action on a market-based solution like the one Sens. John McCain and Joe Lieberman worked on a few years ago, the President stated “but if Congress won’t act soon … I will … with executive actions.”

Despite the apparent inaction by the federal government, the official U.S. international commitment to emissions reduction — a 17 percent reduction of carbon dioxide emissions below 2005 levels by 2020 — may well be achieved!

Moreover, there are five other rules making their way through the regulatory pipeline on sulfur oxide, nitrogen oxide, coal fly ash, particulates and cooling water withdrawals. All these regulations will have profound effects in curbing the future use of existing coal-fired electricity.

And Assembly Bill 32 in the state of California includes a carbon dioxide cap and trade system that is more ambitious than the Waxman-Markey Bill was at the national level.

Finally, the development of new sources of natural gas in the United States, and impacts on the supply, price, and price trajectory of natural gas, and the consequent movement that has occurred from coal to natural gas for generating electricity

So there is going to be action that will significantly affect U.S. carbon dioxide emissions. The big difference is that most will not be called “climate policy.”

Virtually all the changes will occur within the regulatory and executive-order domain, not new legislation.

Will this set of actions and developments put the U.S. on a path to the long-term Waxman-Markey target of an 83 percent reduction below 2005 by 2050? Of course not. For that, a legislated, national carbon pricing regime will be necessary.

Are there lessons from history that could inform the construction of climate policy over the next four years?

Nearly all our major environmental laws were enacted over the past 40 years in the wake of highly publicized environmental events, including the spontaneous combustion of the Cuyahoga River in Cleveland in 1969 and the discovery of toxic substances at Love Canal in Niagara Falls, N.Y., in the mid-1970s.

But note that the day after the Cuyahoga River caught fire, no article in The Cleveland Plain Dealer commented that the cause was uncertain, that rivers periodically catch on fire from natural causes. On the contrary, it was immediately apparent that the cause was waste dumped into the river by adjacent industries. A direct consequence of the observed disaster was the Clean Water Act of 1972.

Climate change is distinctly different. Unlike the environmental threats addressed successfully by past U.S. legislation, climate change is not as easily observed to the general population. As Sen. Mark Rubio stated with conviction and a smile in his response to the President’s State of the Union address, “Our government can’t control the weather.”

So, notwithstanding last year’s experience with superstorm Sandy, and despite some minor changes in polling numbers on climate change, it remains the case that until there is an obvious, sudden, and perhaps cataclysmic event, such as a loss of part of the Antarctic ice sheet leading to a dramatic sea level rise, it is unlikely that public opinion in the United States will provide the tremendous bottom up demand that led to Congressional environmental action in the past.

That need not mean that there can be no truly meaningful, national climate policy — such as carbon pricing — until disaster has struck. But it does mean that popular demand may not come in time, and that instead what will be required is inspired leadership at the highest level that can somehow begin to bridge the debilitating partisan political divide.

Robert N. Stavins is a professor of business and government at the John F. Kennedy School of Government, Harvard University, co-editor of the “Review of Environmental Economics and Policy,” and a member of the Board of Academic Advisors of the Regulatory Markets Center.