Why Millennials Are Struggling, Grannies Are Thriving, and What to Do About It 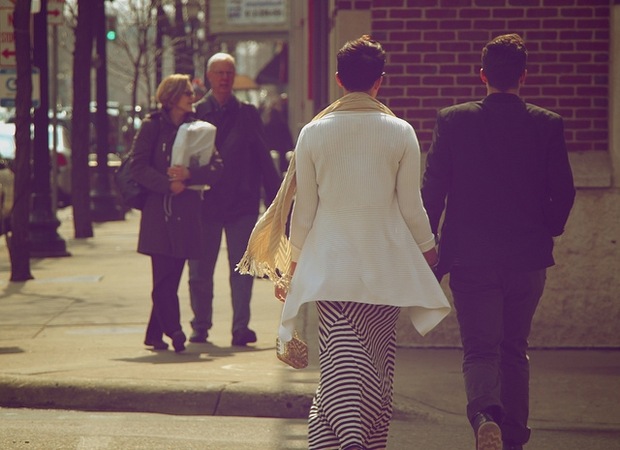 It takes millennials longer than young adults in their parents’ generation to reach the middle of the wage distribution. Photo courtesy of Flickr user Clint McMahon.

Editor’s Note: Millennials are the most educated generation ever, but it’s taking a lot longer for them to launch their careers. But don’t blame older workers still on the job; they’re not crowding their kids and grandchildren out of the good jobs. That’s the conclusion of a new report from the Georgetown University Center on Education and the Workforce and The Generations Initiative: “Failure to Launch: Structural Shift and the New Lost Generation.”

Anthony Carnevale is director and research professor of the Georgetown University Center on Education and the Workforce, where Andrew Hanson is a research analyst and Artem Gulish is a research associate.

Here, Carnevale, Hanson and Gulish select several graphs from the report’s executive summary to explain how structural economic shifts and two recessions have turned this into the “lost decade” for millennials — and what can be done about it.

The lockstep march from school to work and then onto retirement no longer applies for a growing share of Americans. Long-term structural economic changes have created a new phase in the transition from youth dependency to adult independence.

Millennials are launching their careers later and taking longer to get traction in careers that pay a living wage. It now takes the average young worker until age 30 to reach the middle of the wage distribution; young workers in 1980 reached the same point at age 26. Young adults’ labor force participation rate is down to its 1972 level, after 40 years of growth between 1950 and 1990. 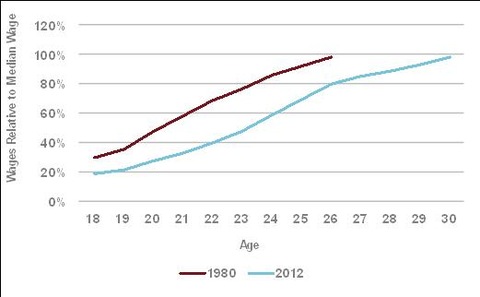 Young men have experienced the most substantial setbacks. As their access to blue-collar occupations has declined over the past 30 years, they have been left either unable to find work or are increasingly likely to work in food, personal service, sales and office support occupations that often pay low wages. In 1980, young men earned 85 percent of the average wage in the labor market; today, they earn only 58 percent of the average wage. 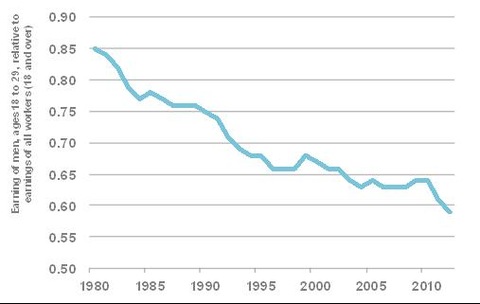 The enormous declines for young men are due in part to their failure to keep up with the growing skill premium in the labor market relative to young women. Young women began enrolling in college and earning college degrees at higher rates than men in the 1990s, and the gender gap has widened in the years since. 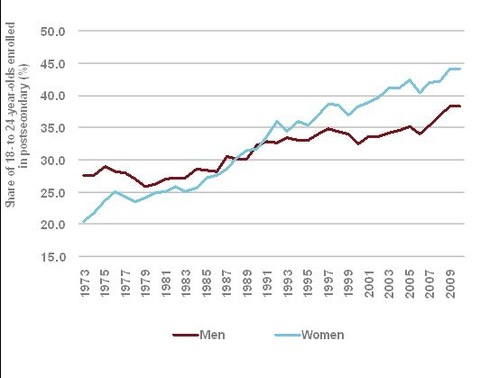 Structural shifts, combined with negative effects of two recessions in the 2000s, created a lost decade for young adults, whose access to full-time work and wages declined substantially. The Great Recession of 2007-08 had a disproportionate impact on young adults: although 18- to 29-year-olds represent only 23 percent of the workforce, they represent 36 percent of the unemployed.

Worse yet, the problems young people face today likely won’t be temporary. Entering the labor market in a bad economy can have pernicious long-term effects that can last a lifetime because workers in a bad economy often settle for less attractive career options than they would in a healthy economy, delaying their ability to ascend the career ladder.

It’s not about Millennials’ culture or work ethic

Millennials aren’t employed at lower rates because they’re lazy or bad at math; they’re the most educated generation ever. But they’re also the first generation to face the new demands for education and skill — and a bad economy, a much higher cliff to climb than previous generations.

For older adults, the long-term trends are more encouraging. Life expectancy at age 65 has increased and health outcomes have generally improved. Older adults’ employment rate, wages, income and wealth levels have risen over the past three decades, especially for college-educated adults and women. Many of these older adults have also shifted out of blue-collar occupations into high-paying managerial or professional office, STEM, and healthcare professional and technical occupations.

Their employment continued to increase in the 2000s despite the negative cyclical effects of two recessions. And today, older workers represent 21 percent of the workforce, but only 16 percent of the unemployed. The Making Sen$e multi-media package, “New Adventures for Older Workers,” explores all this in interactive detail.

It’s not as if older adults have not themselves faced problems in the 21st century: they have. Those who lose their jobs are especially vulnerable to spells of long-term unemployment and skill atrophy. Those who eventually become re-employed take substantial pay cuts.

Some argue that older workers delay retirement not because they want to but because they have to. However, those delaying retirement typically are more educated, have higher earnings, and work in careers in which they have long tenure. Among seniors younger than 75, half of graduate degree-holders are employed, compared to one-quarter of those with only a high school degree. 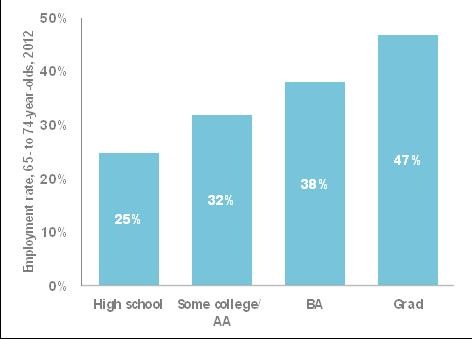 Because so many young adults are unable to find work, some people are concerned that, by delaying retirement, seniors are crowding young people out of the labor market. 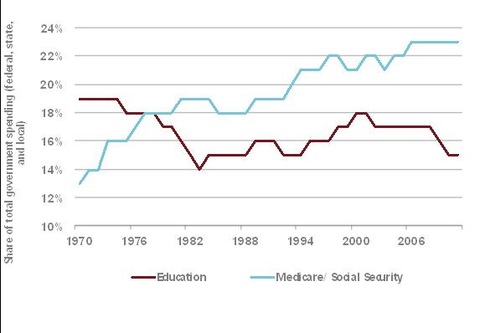 But encouraging older adults to retire at earlier ages wouldn’t help young adults trying to find work; it would mainly hurt the retirees. Older adults who continue to work are healthier, consume less in public benefits, pay more taxes, and contribute to higher levels of economic growth. But older adults need young adults to do well financially so we can afford to sustain seniors’ retirement benefits.

What to do about the struggling young

If the United States were as efficient as South Korea, Canada or the United Kingdom, its post-secondary attainment rate would increase from 43 percent to more than 60 percent.

Are Our Parents Stealing from Our Kids? No, They’re Not

Choosing a post-secondary program is the first big investment decision young people make, especially the majority of students who finance their study with loans. Students need to understand the risks and rewards associated with their choice of college and field of study. As college costs increase and labor market returns on different paths of study shift, prospective students need resources to make informed choices to ensure high returns on their investments.

The good news is that all the necessary data to build a college and career information system already exists. Sens. Ron Wyden, D-Ore., and Marco Rubio, R-Fla., have introduced the “Student Right to Know Before You Go Act,” the first step in developing a modernized system that promotes transparency in the alignment between post-secondary programs and career pathways. Similar legislation, H.R. 4282, has been introduced in the House. Now we just need to connect the dots.