The price of oil had its biggest one-day decline since the Gulf War in 1991 on Monday, plummeting, at one point, by more than 30 percent. That’s not just bad news for the companies that produce oil, it’s potentially devastating for the economies of the countries that depend on it.

For many of the oil-rich countries, 2020 was already off to a miserable start, but they took a beating on Monday– a barrel of oil now costs half what it did at the beginning of the year. What happened?

In a nondescript building tucked away on a quiet Vienna street, far from the Austrian capital’s apple strudel-pushing cafes, energy officials representing countries that produce more than half of the world’s oil spent much of last week discussing whether to cut the amount of crude they supply to the market, and if so, by how much.

Previously, when the oil price would take a dive, the Organization of the Petroleum Exporting Countries (OPEC) — currently made up of Saudi Arabia, Iraq, Iran, and 11 other oil-producing nations — would decide what its members would do and how to share the burden of lost revenue. For years, when the price fell, their coordinated cuts were enough to send the price back up again.

But, with the rise of the American shale producers who aren’t members of the organization and don’t follow its rules, the OPEC producers alone don’t have the same market sway anymore. In reaction, OPEC teamed up in 2016 with a handful of oil-producing countries outside of the club to make decisions as a cohesive bloc. Russia is the biggest and most important of those countries.

For much of the last four years, most oil market watchers would agree that OPEC+, as the larger group of two dozen countries has come to be known, was pretty successful. Together these countries calibrated their collective output the best they could to be in sync with the roughly 100 million barrels a day the world requires.

At the beginning of last week, concerned that demand for their product was falling faster than the cuts they’d already agreed to at previous meetings, the OPEC+ countries hatched a plan to cut their supply by another million and a half barrels a day. All they needed was for Russia to sign off. On Friday, 23 energy ministers awaited the arrival of their Russian counterpart, Alexander Novak, to do just that.

The Kremlin had a different idea. Moscow had decided it doesn’t want to cut its production any more than it already had.

As the other nations’ emissaries waited on the sidelines, Novak held talks with Prince Abdulaziz bin Salman, Saudi Arabia’s energy minister and an older half brother of Saudi Arabia’s Crown Prince Mohammed bin Salman. The two officials reportedly spent hours together, but failed to agree on a path forward. With the two powers unable to agree on how to share the pain of more cuts between themselves, the other nations balked. When OPEC+’s formal meeting ended, the Saudi and Russian energy ministers emerged separately.

While Novak declared Russian oil producers were free to produce as much as they want, starting April 1, Saudi Arabia’s energy minister said he would “keep you wondering” as to whether the kingdom can, or will, increase production. He didn’t keep the market waiting for long.

By Saturday, Bloomberg reported, the Saudis were offering their customers the biggest discounts in 20 years and promising to increase production next month. Discounts for European customers – which Russia also supplies – were said to be particularly large. Analysts say the move is meant to send a message to Russia. Meanwhile, Rosneft, Russia’s largest oil company, said it plans to raise production.

Russia and Saudi Arabia’s pledges to open the taps mark the beginning of a battle for market share. Investors fretted a supply glut is coming; the oil price fell precipitously. 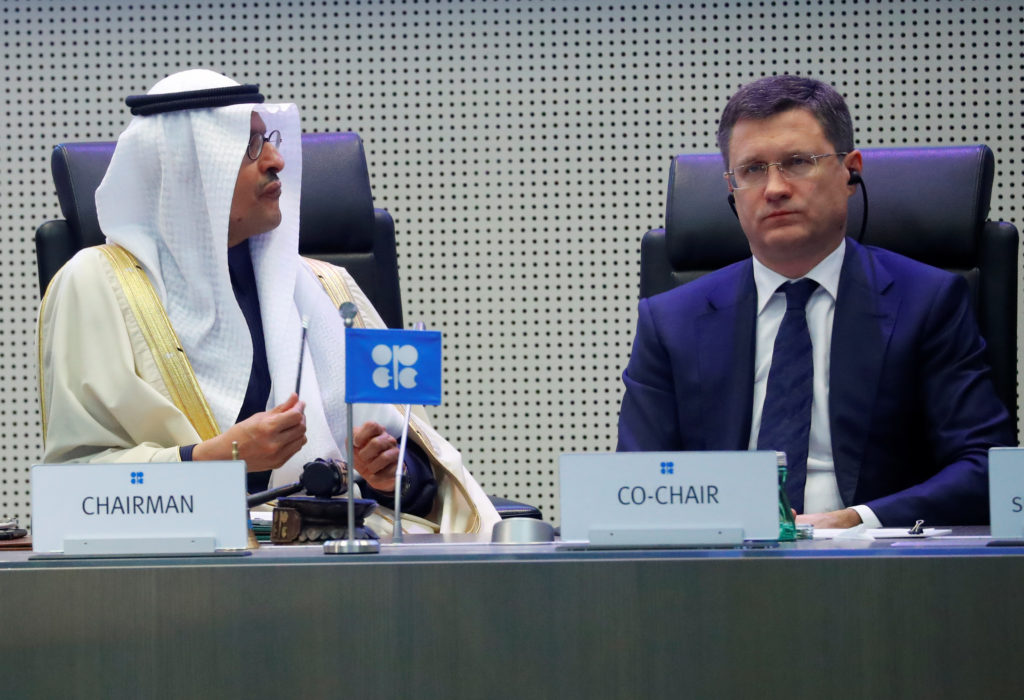 Saudi Arabia’s Minister of Energy Prince Abdulaziz bin Salman Al-Saud and Russia’s Energy Minister Alexander Novak are seen at the beginning of an OPEC and NON-OPEC meeting in Vienna, Austria, on Dec. 6, 2019. Photo by REUTERS/Leonhard Foeger

What is Putin thinking and why did he blow up the price of oil?

There can be little doubt that Russian President Vladimir Putin, who pays particular attention to the oil industry, personally made the decision not to cut production. And while Russia appears to now be locked in battle for market share with Saudi Arabia, the real target here is almost certainly U.S. oil producers.

For much of the last decade, American shale producers have flourished by using technology and controversial, cutting-edge techniques to get hydrocarbons out of the ground that American energy companies couldn’t have dreamed of before. The shale boom has turned the U.S. into the world’s largest oil producer – tripling output and fueling an industrial renaissance with cheap prices.

Putin has criticized the shale producers, regularly pointing out the environmental damage they create. So too does Igor Sechin, the CEO of Rosneft, a Russian oil company, and Putin’s long-time associate.

The logic behind the Kremlin’s move is straightforward. If Russia had gone along with their partners in cutting production, they would have thrown a lifeline to America’s shale producers that weren’t party to the cuts. Without any of the sacrifice, American oil companies would enjoy the benefits of the price increase. To prop up the oil price, Russia has been cutting its production since 2016 — depriving itself of much-needed revenue, while the shale producers have ratcheted up their production at higher prices they didn’t help create.

Russia’s energy officials have also long complained that the U.S. government is using energy as a weapon in its fight against the Kremlin. Last December, the U.S. imposed sanctions on companies involved in the construction of a new pipeline that will deliver Russian natural gas to Western Europe, declaring the Nord Stream 2 pipeline a Kremlin “tool of coercion.” At the same time, Trump administration officials have implored NATO allies to buy the U.S.’ “freedom gas.”

Many American shale producers need an oil price above $40 a barrel to remain solvent. Thanks to an era of cheap money from the Federal Reserve, they are now straddled with debt and will struggle to meet their interest payments. The American company, Occidental Petroleum, is one of the largest such producers and lost more than half its value Monday. Having recently borrowed heavily to buy another oil company, Occidental is now considering selling billions of dollars in assets, including more than a million acres to the state of Wyoming in what would amount to the single biggest land purchase by the United States since it bought Alaska from the Russians in the 19th century. The fire sale may not happen fast enough. The Kremlin smells blood (and bankruptcies).

Having forged a personal relationship with Saudi Arabia’s crown prince, Putin will not have made the decision to break ranks with his Saudi ally lightly. But in the battle for supremacy, he may have seen a short-term sacrifice as necessary. 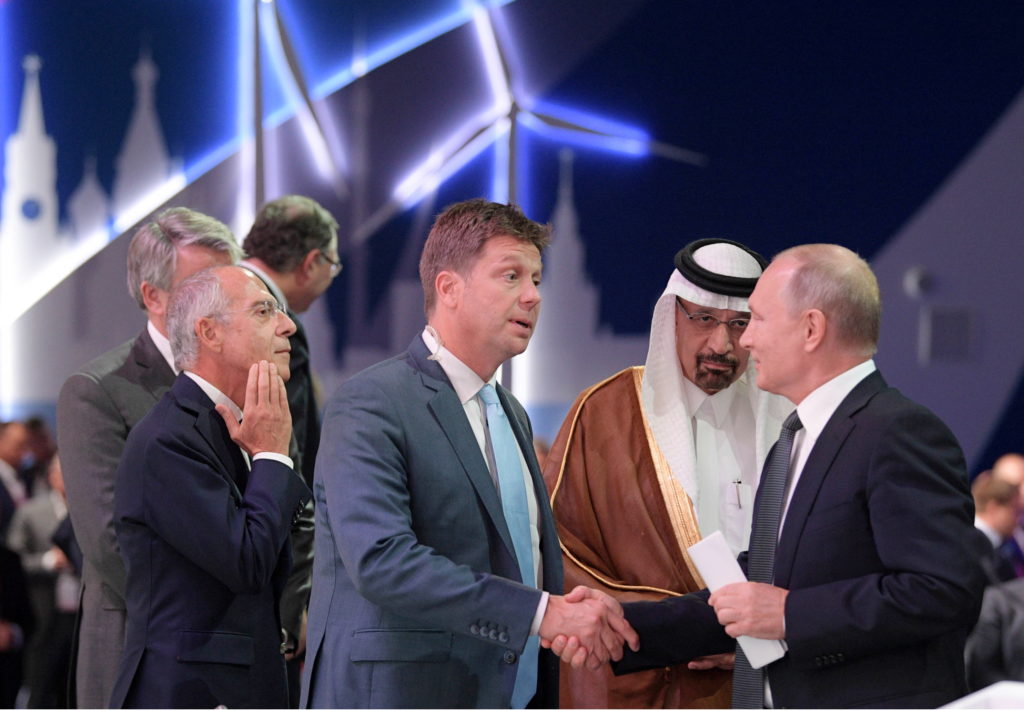 There is precedent for what happens when OPEC and its allies abandon coordinated cuts and its member states go it on their own. The Saudis did just that in 2014 to (ironically) go after the higher-cost American producers. The price of oil continued to fall for more than a year before bottoming out at less than $30 a barrel. That time, most shale producers were able to cut their costs to such an extent that they were able to sustain the price shock. In the end, the Saudis threw in the towel.

Many economists argue this time is likely to be different in a variety of ways. Shale producers may not be able to cut costs as they did then. What’s more: The price of oil may fall far below the levels previously seen.

In the current rout, it took all of three days for prices to fall to the same low levels as back then. Part of the reason — unlike that time — is that the underlying demand for oil has been falling all year due to novel coronavirus.

China, the world’s second-largest consumer after the United States, has been buying less oil with its factories shut or operating at reduced capacity. And as the virus has spread and economic activity slowed, other countries have followed suit – tempering their demand for hydrocarbons.

It’s not just industry. International travel is plummeting. Even as the ministers deliberated in Vienna, Austrian Airlines said it was putting many of its 7,000-strong staff on part-time duty. And the energy officials didn’t need to be reminded. They themselves had debated the wisdom of all flying in from the far corners of the earth and gathering face to face, given the virus’s proliferation. In the end, they decided they’d meet, but keep journalists outside of the building.

The International Energy Agency, which carried out research on behalf of the oil-consuming countries, said Monday it expects demand for oil to fall this year.

There is a chance Russia could have a rethink and rejoin the negotiations to cut supplies. That is what the rest of OPEC is hoping. Suhail Al Mazrouei is the energy minister for the the United Arab Emirates, a large oil-producing country and close ally of Saudi Arabia. As the energy ministers prepared to head home last week, he told reporters, “We are hoping that our friends from Russia need more time to think about it and maybe come back.”

What does it mean for the oil-producing nations (and everyone else)?

Many of the oil-producing countries are heavily reliant on the oil price to fill their coffers. When they determine their budgets, they base it on what they think the oil price is going to be. According to the International Monetary Fund, Russia needs an oil price of roughly $40 a barrel to balance its budget, while Saudi Arabia needs over $80 a barrel to balance its books. Both countries have huge reserves, can borrow and can, of course, cut their budgets, but that means austerity.

For now, the Russians are talking tough. That country’s Finance Ministry on Monday issued a statement saying the country can withstand the drop in oil prices for “six to 10 years” by tapping the Kremlin’s foreign currency reserves.

Another factor is the amount of money it costs to get oil out of the ground – the so-called break-even price. While it is relatively cheap to produce oil in Russia and the Middle East, it is more expensive to pump oil in places like Venezuela, Nigeria and Texas (remember the shale producers). Places where it costs a lot to get oil out of the ground and where budgets are built on higher prices will see real pain.

For Americans who don’t work in the oil industry and are not invested in it, the flip side is that falling oil prices also mean lower gasoline prices at the pump. You can expect them to fall noticeably in the coming weeks.

In theory, cheaper oil is also good for the global economy. The cheaper oil is, the more likely companies are to buy it and engage in productive economic activity. This fall in prices should help grease any global recovery. In the meantime, though, the world is in for a geopolitical roller-coaster.

Left: A well head and drilling rig in the Yarakta Oil Field, owned by Irkutsk Oil Company in Irkutsk, Russia, on March 11, 2019. Photo by REUTERS/Vasily Fedosenko