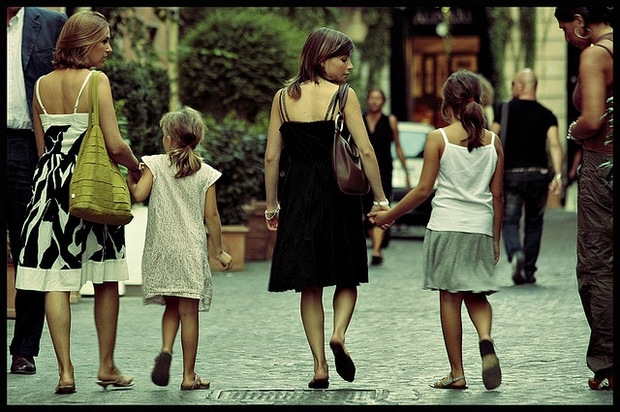 Daughters’ working decisions are influenced by their own mothers and the mothers of their friends. Photo courtesy of Flickr user Fabio Trifoni.

When Anne-Marie Slaughter first broached writing an op-ed about how women “still can’t have it all,”, a senior female White House staffer with whom she was mingling told her, “You can’t write that.” Slaughter was a role model — the first female director of policy planning at the State Department and a mom. Indeed, when the Atlantic published her now infamous essay, many young women just embarking on their careers flocked to the pages of the magazine.

Slaughter may be a role model for many women in their late 20s and 30s facing the same work-life conundrum she described, but the work choices women make stem from a deeper and more familiar place.

Women’s attitudes about gender roles in the workplace and in the home are often shaped in adolescence. Who are the female role models of most middle and high school girls? Whether the girls would admit it or not, it’s their moms. But not just their own mothers. Their friends’ mothers are often equally important.

Silicon Valley Discriminates Against Women, Even If They’re Better

Both women clearly remember their friends’ mothers. Seeing the range of lifestyles of her friends’ moms — some were home cooking, some were out working — reinforced Patacchini’s identification with her mother, the professor. But Olivetti was fascinated by the working moms of her friends and knew she wanted to be like them instead of a housewife like her mom.

In a recent working paper from the National Bureau of Economic Research, Olivetti and Patacchini examine how early gender identity formation influences work decisions in adulthood. They assess “work decisions” by looking at the number of hours worked (controlled for education, family wealth and location).

It turns out that Patacchini’s own career trajectory reflects one of their key findings: a daughter is more likely to pattern her work decisions after her mother’s when the mother’s work choice (in terms of number of hours worked) is more distant from the choices of the other moms. In other words, because Patacchini had a mix of friends whose moms worked in and outside the home, Patacchini hewed closer to her mother’s decision to work. More variety among role models made her identify with the one who was closest to her.

But what about Ms. Olivetti? She didn’t follow in her mother’s footsteps and become a housewife. Instead, she was influenced by her friends’ mothers; as a young girl, she saw the independence they had and wanted that for herself when she grew up.

What’s significant about the authors’ approach is their focus on this broader social context, widening the intergenerational transmittance of gender attitudes to include friends’ mothers.

The key to the data set, Olivetti explained, is the friendship mechanism. The National Longitudinal Survey of Adolescent Health (AddHealth) surveyed about 90,000 pupils in grades 7-12 in the early 1990s, asking them to list their friends and to answer questions about their own family backgrounds and characteristics. A select pool provided in-home and parental data. From this list of friends and their backgrounds, the authors were able to draw patterns of social interaction.

Subsequent waves of the AddHealth survey, administered when the students were 24 to 30 years old, asked about their working hours. The authors observed which of a woman’s classmates were her friends and what they and she were doing as young adults, namely how many hours they worked, compared to their moms.

But so what if your work choices mirror your mother’s? That doesn’t necessarily mean you share the same attitudes about working outside the home.

Couldn’t it be that what mothers really pass down to their daughters are certain skills that make them better equipped for working either in or outside the home? Of course, mothers endow their daughters with certain capital (job skills or training) that influences their work choices. And yet, daughters’ hourly wages are not correlated with mothers’ working hours, as you would expect if the transmission of these skills explained why daughters’ work choices are like their mothers’.

The correlation they did find is that the more mothers worked, the more their daughters were likely to have egalitarian attitudes toward gender when they reached working age.

A typical General Social Survey (GSS) question asks respondents to what extent they agree with a statement such as: “It is much better for everyone involved if the man is the achiever outside the home and the woman takes care of the home and family.” Among women born between 1978 and 1984 whose mothers worked, only 24 percent agreed with that statement compared to 51 percent of those whose moms did not work.

A mother’s labor market participation when her daughter is 16 years old shapes the daughter’s gender role attitudes, and work choices, in adulthood. Why does that matter?

It’s important, Pattacchini emphasized, that their research be understood as a gender identity and not a human capital story because those two narratives carry very different policy prescriptions for increasing female labor participation rates. If the story is about human capital, she explained, the solutions become technological. Attributing the observed correlation between work choices to gender attitudes, however, demands a cultural solution, Patacchini explained, like changing attitudes about gender roles — early on in school.

Hours worked, the authors acknowledge, is an “imperfect indicator” of how and why women make work-family trade-offs. A corporate lawyer may work 70 hours a week but so could an immigrant mother juggling three low-wage jobs. Olivetti hopes to include college majors in further research to assess what women are actually doing during their hours worked and how that correlates with their moms’ work activities.

Differences in education did reveal some effects in this data, however. When they zero in on college-educated women who are now having children of their own, the influence of friends’ mothers drops off significantly; it’s just daughters’ own mothers who are influential. As Olivetti explained, gender identity becomes most salient when women, like those reading Slaughter’s article, are trying to decide how to strike their own work-life balance.