How will climate change impact future floods and flood insurance?

Editor’s note: Radley Horton is a professor at Columbia University’s Lamont-Doherty Earth Observatory, where he studies climate extremes, impacts and adaptation. He spoke with NewsHour economics correspondent Paul Solman for Thursday’s Making Sen$e segment on flood insurance. The following excerpt of their interview has been edited for length and clarity.

Paul Solman: How certain are we, or can we be, that these storms and the flooding associated with them is a function of climate change?

Radley Horton: There are many components to these storms. And, depending on what part we’re talking about, the certainty differs. There are some aspects that are really a sure thing. For example, we know that sea levels are rising. We know that’s going to continue. And even if storms don’t change at all, just by virtue of raising that baseline, raising that floor, we’re going to see more frequent and more severe coastal flooding. But, when we look at some of the really fundamental aspects of a storm itself, there’s more uncertainty. The balance of evidence suggests that the strongest storms will become stronger, with stronger winds, more storm surge, as the planet warms, and as the upper oceans warm. But we can’t say it’s a sure thing.

RH: There are many things that can impact the climate, for sure. But right now, during this era that we’re living in, human activities and the burning of fossil fuels is, by far, the most powerful influence. Just since the start of the industrial revolution, we’ve increased the amount of carbon dioxide in the atmosphere by about 40 percent. It’s already caused sea levels to rise, close to a foot in many places along the U.S. coast. So that’s increasing the risk of these types of storms.

WATCH: Less than half of Florida homeowners have flood insurance

PS: Can’t we mitigate the effects of flooding? I mean, that’s what they’re doing, raising houses all over the coastline in the United States, and [countries like] Holland.

RH: The types of mitigation efforts you’re talking about are critical. This is what we often hear referred to as ‘resilience’ or ‘adapting’ to a changing climate. And that has to be a key component of all strategies. We absolutely do need to strengthen that infrastructure, whether it’s elevating buildings, green infrastructure that can capture some of these excess water. We need those strategies.

But you start to wonder, at what point have things changed too much for us to be able to adapt to? For example, if you look at parts of South Florida, as sea levels rise, as the water table rises, no matter how much money you put into trying to build sea walls, that water is just going to make its way up, like Swiss cheese through some of that limestone. You can’t hold the water back.

PS: So what would you advise somebody who lives in a floodplain? Should they just get out? [Because] many can’t, economically, right? Or do they jack up their houses? Is that the best approach?

RH: If you live in a flood zone, certainly you should be thinking about climate change. That’s one of the dimensions. But there are a lot of other factors that impact vulnerability as well. When people were assessing the risk originally and defining the flood zones, they [made estimates] based on 10, 20 years of rainfall data. [That’s] an insufficiently long sample to really estimate the true one-in-a-hundred-year risk.

Another concern is that, since that home was built, there may have been changes in development in surrounding areas. If you look at what happened in Houston recently, so much of the natural area had been covered up with pavement. That changes the flood risk. [But when it comes to] the climate change piece, and if we’re talking about homes that are in coastal zones, sea level rise is a game changer. 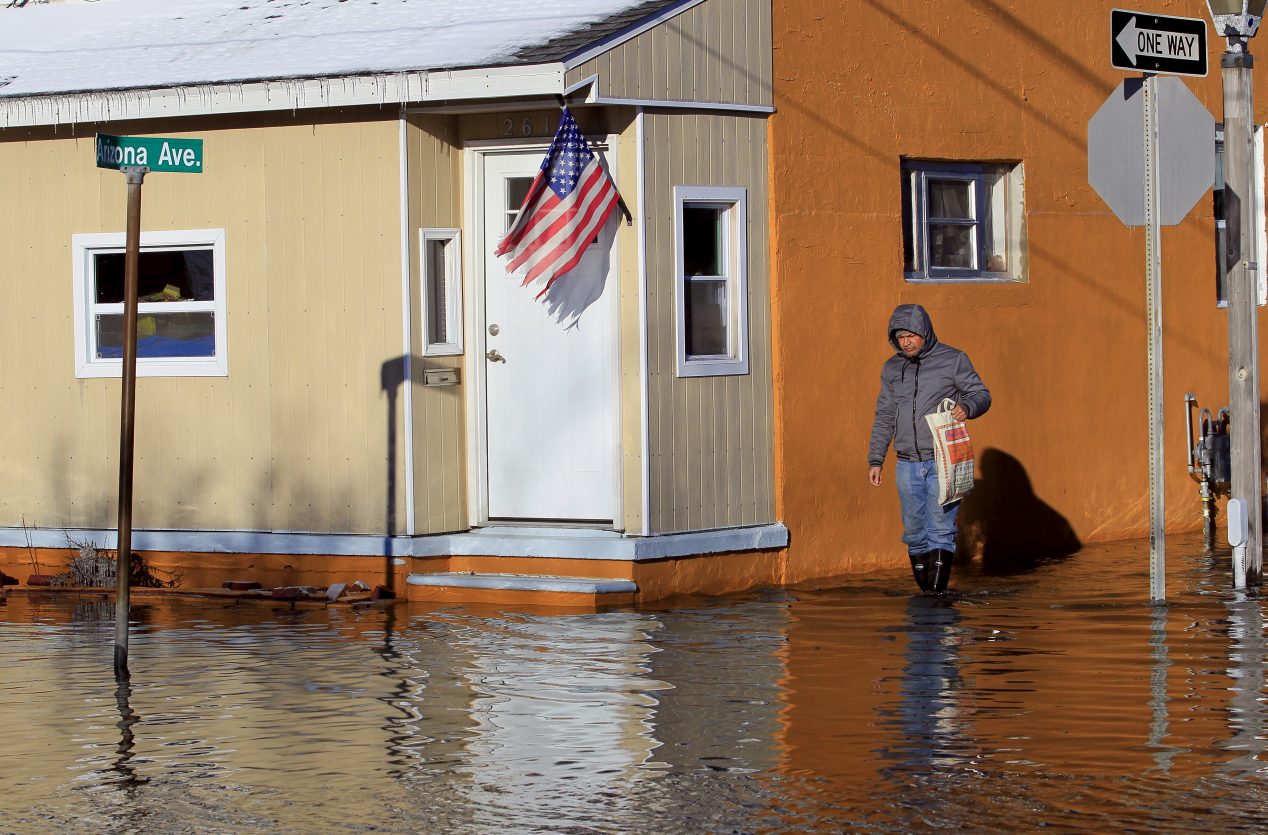 A man walks on a flooded street in Atlantic City, New Jersey after a powerful snowstorm struck the East Coast on January 24, 2016. File photo by REUTERS/Tom Mihalek

PS: When the federal government redraws a map in a place like Pequannock, New Jersey, and includes more and more houses, hundreds more houses, in the floodplain, is the government potentially overreacting?

RH: The government is trying to update using the latest available information. More years of weather data are now available, and there’ve been changes in the land use in some of these regions as well, that impact the path that that water takes.

PS: Has flood insurance basically induced people to take risks that they shouldn’t be taking?

RH: Quite possibly. That’s why we need a much deeper discussion, both about those properties that currently are insured, and about uninsured properties, and about properties that, as the climate changes, are going to be moving into newly defined flood zones. [In the future], we could see property values fall, not because water touches or doesn’t touch some of these homes, but because of systemic risk, the inability of insurance to cover all these assets, or investors finally realizing that a lot of critical infrastructure isn’t going to be fundable.