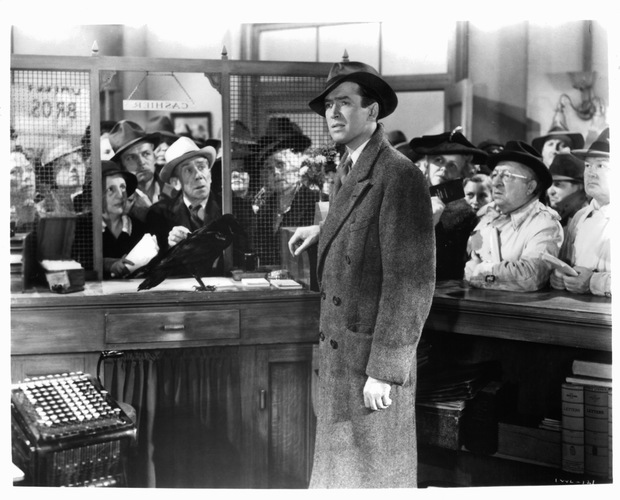 James Stewart standing in the cashier cubicle in a bank run scene from the 1946 film “It’s a Wonderful Life.” Photo by RKO Radio Picture/Getty Images.

Monday’s Making Sen$e post asked you a question: Would you keep your euro in a Greek bank if you thought a “Grexit” — a Greek exit from the euro — was inevitable? And if you wouldn’t, would a run on Greek banks not be forthcoming. Indeed, Boston University economist Larry Kotlikoff was predicting just such a run, immediately.

It doesn’t appear to have happened. Not Monday or even Tuesday. Not in the Northern Rock/IndyMac/”It’s-a-Wonderful-Life” sense of a bank run, at least, with depositors lining up, panic stricken, to withdraw their money. Kotlikoff is the author of “Jimmy Stewart Is Dead.” A Wonderful-Life run was what he had in mind.

By contrast, the proprietor of the Zero Hedge website, ever-grim “Tyler Durden” (yes, of “Fight Club” fame), has been writing for two weeks that a general Greek run is already in progress. He provided evidence a few days ago from Reuters, quoting Greece’s national police spokesman, Thanassis Kokkalakis:

“Many people have withdrawn their money from the banks fearing a financial crash, and they either carry it on them, find a hideout at home or in storage rooms. We urge people to trust the banking system, leave their money there, or at least in a safe place, not hide it at home.”

But consider this very different point of view from Peter Pham of Motley Fool on MSNBC.com:

“Since money is mostly digital now, bank runs really don’t have the same impact they had in the 1930s. Today if you are scared for the health of your bank you pull your money out of one and deposit it in another. It’s a transfer of digits from one server to another. Greeks pull their money out of Greek banks and deposit the digits in Swiss or German banks. The Swiss and German banks are then free to lend at zero interest back to the Greek banks hence negating any net effect on the liquidity of the banking system.”

Pham’s certainly got a point, even if it’s not clear why Swiss and German banks would lend back to Greek banks at zero interest, or if they would. And if a lot of the money is being deposited in non-European banks as well, what incentive do they have to keep Greek banks afloat?

But the good point is that with most money in digital form these days, you don’t have to line up outside the front door, or even at the ATM machine, to run for your money.
So are bank runs now implausible? No. Even with full government insurance, as in the case of the FDIC and IndyMac, your account could be tied up in red tape whereas you need the money now. In the case of Greece, deposits in non-Greek banks may be small consolation for those who need ready cash.

Here’s the estimable economics columnist Robert Samuelson in his Real Clear Politics blog Wednesday morning, echoing our post on Monday: “Regarding Greece, I am puzzled by this: Why hasn’t there been a massive run on its banks?” He then lays out the arguments that Greece will “muddle through” but ends with this: “If it were me, I’d still take my money and run. If too many Greeks start to think this way, events could swiftly spin out of control.”

Meanwhile, Spain, too, is in terrible shape Wednesday morning — worse than ever, some would say, given that the interest rate on its 10-year bonds is climbing toward the 7 percent mark considered fatal by many. Money has been fleeing Spanish banks as well. Today has started as a validation of economic catastrophism.