Paul Solman answers Next Avenue readers’ questions about whether a minimum wage hike would induce people to leave welfare, and whether such a hike would increase the government’s tax revenue. 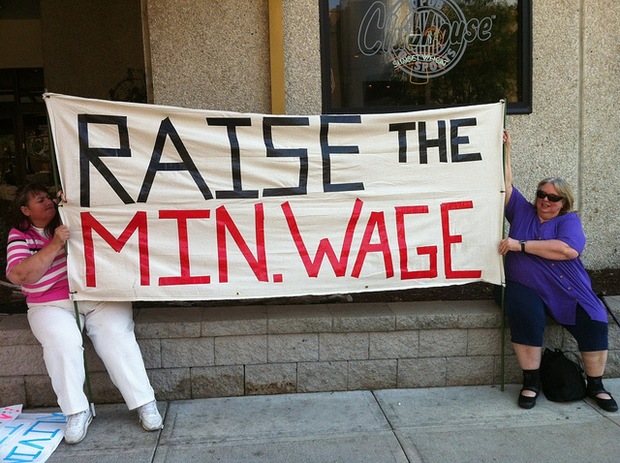 Paul Solman frequently answers questions from the NewsHour audience on business and economic news on his Making Sen$e page. Friday’s comes from a reader at Next Avenue. The NewsHour has partnered with Next Avenue, a new PBS website that offers articles, blogs and other critical information for adults over 50.

Big Swed –Twin Lake, Mich.: An old friend, then on welfare, remarked that if they made it any harder, why, she might have to find a job. I heard her friends remark that it simply did not pay to work, because wages did not equal welfare benefits. I wonder how the proposed minimum wage hike will impact welfare recipients?

Paul Solman: An interesting angle I hadn’t ever thought of, “Big Swed” — that if wages are hiked, they might discourage those on the dole.

Well, assuming for a moment that welfare recipients have a choice, as your friend claims, the thought deserves examination. Ever since President Clinton’s welfare-to-work reform, though, welfare benefits have been no slam dunk. So, I do wonder how long ago your old friend made the statement you cite.

Instead, the main safety net provider these days is Social Security, through its Supplemental Security Income (SSI) and Disability Insurance (SSDI) programs. The former, SSI, is for the indigent disabled who don’t qualify for Social Security; the latter, SSDI, for the “disabled” who have worked enough hours to qualify for SS.

Between these two groups, some 14 million Americans under the age of 65, including dependents, receive either one or the other. By comparison, only 4.3 million or so are on welfare.

And get this: Social Security disability benefits have become so popular that since June of 2009, when the Great Recession was supposed to have officially ended and economic growth resumed, 4.7 million of us had enrolled in SSDI or SSI programs. By contrast, a mere 2.3 million jobs have been added over that same period.

It should be pointed out that actually getting SSI or SSDI benefits is not easy either. Barely a third of disability claimants are accepted into the programs when they initially apply. Many then hire lawyers to appeal their denials. The success rate for “reconsideration” varies drastically by state, but the national average was about 13 percent as of a few years ago.

In addition to the difficulties of getting benefits, they’re not especially generous. For those who do manage to get disability or supplemental security income, the average yearly benefit as of February 2013 is $13,900.

Okay, now we get to the nub of Big Swed’s question: how does the disability dole compare to a full-time minimum wage income?

As it happens, if you work full-time, it’s pretty close. The federal minimum wage is $7.25. Multiply $7.25 per hour by 40 hours per week and then by 52 weeks per year and you get $15,080. If the minimum were boosted to $9 an hour, however, as the President has proposed, that would bring maximum yearly minimum wage earnings, according to my calculator, to $18,720.

It should be pointed out, however, that only 20 percent of minimum wage earners work 40 or more hours a week, according to the Bureau of Labor Statistics; fully 58 percent work 30 hours or fewer. See this article in the Atlantic for more detail.

The question I would pose, then: how many fewer Americans are likely to apply for SSDI, SSI or welfare if the minimum wage rises? It’s got to be some number, presumably. And every one of them represents less money that America has to borrow, at a current average interest rate of above 2 percent, which will rise if and when interest rates do.

But — and this is the main problem with your question, as I see it — any such calculation assumes that SSI and SSDI recipients could get a job if they wanted to. I am neither naive nor knee-jerk. I can well believe that many who apply for disability payments, and welfare, for that matter, are technically capable of working a minimum wage job and some may even do off-the-books work on the side.

The question is: How many of them are likely to get a legitimate, on-the-books job in this economy? It is an economy in which, as our latest U-7 statistic shows, nearly 27 million Americans say they want full-time work and can’t find it.

Bottom line: I can’t imagine, all things considered, that the number of potential workers would be high enough to make much of a difference to our federal budget deficit because working for the minimum wage becomes a more inviting alternative.

By the way, in researching this answer, I was reminded of two more numbers I had perhaps willfully forgotten. First, an additional 6 million Americans are drawing unemployment insurance, and that doesn’t include their dependents. Add 4.3 million on welfare to 14 million on SI or SSDI to the 6 million on unemployment insurance, and you’ve got at least 24.3 million Americans drawing benefits, most of them below what a full-time minimum wage worker would make.

Finally, how many Americans, including their dependents, have so little coming in that they are eligible for food stamps? Nearly 47 million — one in seven of us.

P. Henry — Lawndale, Calif: It should also be pointed out that by raising the minimum wage, more money flows into the federal and state treasuries in the form of increased tax revenues from the higher incomes. What’s that worth in dollars?

Paul Solman: I don’t know, but I wouldn’t imagine much. How much are minimum wage workers likely to be paying in income taxes? On the other hand, it would help Social Security. Although only 2 million Americans earn exactly the minimum wage, as many as 18 million more, according to an estimate in the Atlantic article referenced above, would be affected by what one might call a trickle-up economics. The Social Security payroll tax applies to everyone, regardless of income level.

Let’s try to do the numbers: a maximum of 20 million Americans being paid a maximum of $1.75 more per hour times a maximum of 2080 hours (40 hours X 52 weeks) equals an extra $73 billion dollars or so. Social Security taxes — individual and employer — come to 12.5 percent. So: an extra $9 billion a year, absolute tops, and undoubtedly much less. Considering that Social Security paid out some $768 billion in Fiscal Year 2012, the additional revenue isn’t likely to make much of a dent.

“Paul Solman: But since all employers would have to abide by the minimum wage, any given employer would lose versus the competition, so why wouldn’t everybody simply raise their prices?

[And now Bill’s comment:] Duh? So let’s increase inflation? What in God’s name has raising the minimum wage done, other than raise prices, in its history? Just what we need in this non-recovering economy. What fools you are. And you call yourselves economists? Resign and get a real job, please, that is, if you can find one.

Paul Solman: Well first of all, many many thoughtful economists support an increase in inflation, which is now down below 2 percent a year. The reason is to boost the economy and prevent DEflation, where prices drop and an economy stagnates, leading to massive unemployment. Because unemployment is already a huge problem in this economy (see my answers, above), the idea is precisely what you object to, Bill: “to raise prices” in order to give businesses more incentive to produce and thus to hire. That is a widely accepted way to get a “non-recovering economy” to recover.

I grant you, not everyone agrees with it. Not every economist, even. But if all those like Alan Krueger who choose to worry more about unemployment than inflation these days are as you characterize us, Bill, then America has a much bigger problem than just economic policy. How long can a ship of fools stay afloat?

Paul Solman P.S.: I just read a tweet from @MarkCalabria recommending an interview with David Card, Krueger’s co-author on the minimum wage work. The interview covers the minimum wage and many other labor market topics. It’s a highly recommended read.