Neighborhood as Destiny? What’s Unknown about Stork Drops and Mobility? 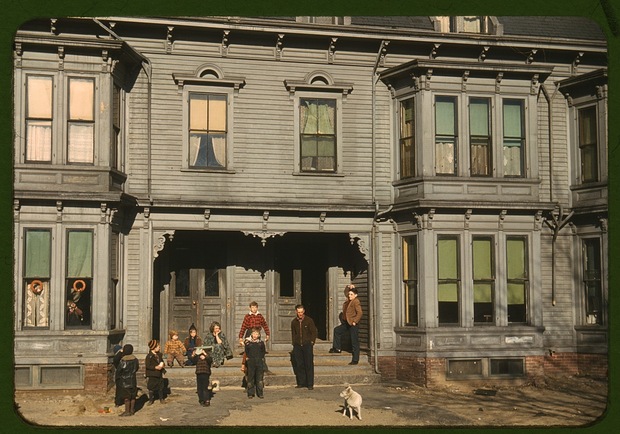 In the wake of the release of a major economic mobility study, there’s still a lot we don’t know about social mobility in this country. “Children in the Tenement District, Brockton, Mass.”, courtesy of Jack Delano via Library of Congress Prints and Photographs Division.

Paul Solman: Increasing economic inequality has been a pre-occupation of ours for many years and our story on the subject in 2011, reported in part on the waiting line to get into the David Letterman Show in New York, remains our most popular ever (at least as measured by Facebook “Likes”).

So when a new study appeared suggesting that inequality varies by a municipality’s generosity or stinginess, the NewsHour interviewed its co-author Raj Chetty, and I reached out to two scholars of inequality, Stanford’s David Grusky and C. Matthew Snipp, for elaboration and context. They responded with a surprising appeal.

David Grusky and C. Matthew Snipp: The recent release of a new economic mobility study that was featured on PBS NewsHour brings much-needed evidence on the difficulty of getting ahead in the United States.

The study is important not just because it suggests how limited opportunities for mobility are in the United States. What’s new is the finding that the neighborhoods in which children grow up affect their opportunities for mobility. The study suggests that poor children who grow up in communities like Detroit that don’t provide income supplements for poor working families are less likely to escape poverty than those who grow up in places like San Jose in which relatively generous supplements are provided. It’s difficult to get ahead, in other words, if one is so unlucky as to be born into an ungenerous community.

We should care about this study because it says that economic opportunity is a function of where the stork happens to deliver us. And that’s not supposed to happen in this country. The U.S. is famously understood to be a special “land of opportunity” in which the particular location of the stork drop is irrelevant. In the U.S., we believe that, no matter how poor the family or neighborhood into which we’ve been born, we will have a fair opportunity to exploit our talents and get ahead. This belief in the ubiquity of mobility underlies our high tolerance for inequality: We’re prepared to accept, even welcome, a highly unequal society as long as we’re assured that it’s the outcome of a fair and open race in which everyone has an equal opportunity to get ahead.

The study is important for another reason as well. Given that the U.S. has this special commitment to social mobility, one might imagine that we are constantly and carefully monitoring trends in mobility, ensuring that policy makers and informed citizens know whether our commitment to opportunity and mobility is under threat. Nothing could be further from the truth: the United States does not administer repeated and comparable surveys of social mobility of the sort needed to monitor trends in social mobility. Although we have various snapshot studies, like the one just released, these single-point-in-time studies cannot easily be used to track trends in social mobility.

Inequality Today: Worse than a Century Ago?

The paper’s authors have carefully and properly avoided making any claims about trend precisely because such trend data are lacking. Although their results tell us that opportunities for mobility are limited, they don’t tell us whether such opportunities are diminishing.

Other rich countries, and even relatively poor ones, commit to ongoing measurements that allow us to examine trends in mobility over the long term. These trend measurements are either based on full population registers (as is the case in Sweden) or on regularly fielded surveys (as in Japan). But there is no comparable effort in the United States to collect data that would allow us to rigorously monitor trends.

In other domains, we’re deeply committed to evidence-based policy. We insist on measuring trends in unemployment rigorously and frequently. We likewise measure trends in student achievement, poverty and income inequality rigorously and relentlessly. But when it comes to social mobility, one of our country’s key commitments, we’ve simply dropped the ball.

What this latest study reminds us is that we urgently need to develop the country’s capacity to assess whether opportunities for mobility, however limited they may be, have deteriorated relative to what prevailed in the past. Although smaller surveys of mobility are available for the purpose of studying trend, they are too small to reach reliable conclusions about whether mobility is declining.

Given the dearth of mobility data, the results of this most recent mobility study from Raj Chetty et. al, are important even if they can’t speak directly to trend. Their study is based on high-quality Internal Revenue Service (IRS) data that exploits a large population of tax records, allowing us to compare the income of parents with that of their children after they grow up and enter the labor market.

But IRS measurements alone won’t likely be the full solution to our need for trend data. First of all, the available intergenerational IRS data does not extend far enough into the past to construct long-term time series. Worse yet, given our country’s long history of racial and ethnic discrimination, it is incumbent on us to monitor racial and ethnic differences in mobility, a task that would be difficult with tax records (given that race and ethnicity aren’t directly available in such records).

Although racial and ethnic effects can be estimated by characterizing neighborhoods in terms of their racial or ethnic composition, as Chetty’s team indeed did, this approach will inevitably confound the effects of race at the neighborhood level with the effects at the individual level. If one finds, for example, that mobility is suppressed within Latino-dominated neighborhoods, we won’t know whether that suppression holds for all residents of those neighborhoods or just for Latino ones.

The IRS registers are also problematic because they represent the filing population rather than the full population of interest. We need to know about the mobility prospects of those who, by virtue of being poor and falling under the filing threshold, do not appear in the IRS records at all. We also need to know about the mobility of unauthorized immigrants and other groups, such as the incarcerated, who are less likely to file. These populations partly disappear when we rely exclusively on tax returns.

We need to build a monitoring infrastructure that allows us to directly, reliably and regularly measure social mobility. If the IRS records are not the answer, what might this infrastructure look like?

The good news is that we can build on already existing Census Bureau surveys such as the American Community Survey (ACS) or the Survey of Income and Program Participation (SIPP). The ACS is administered on a regular basis to approximately two million housing units every year. It represents immigrants as well as those who live in “group quarters” (e.g., students, prisoners). Although the ACS already includes much information on the education, occupation and income of respondents, it does not ask for corresponding information on the parents of respondents.

So we must augment the ACS and other surveys either by directly asking respondents about their parents or by linking to the records of their parents in previous decennial Censuses or other sources. Given what’s at stake, it’s hard to understand why we haven’t done so long ago.

The National Research Council of the National Academies has recently appointed a planning committee that will lay out various options for building a new infrastructure for monitoring trends in mobility. The cost of building this infrastructure will not be trivial, but the outlay is small compared to the cost of continuing to fly blind.

These new survey-based measurements, if they are indeed undertaken, will nicely complement the tax-return measurements of the sort that Chetty and his coauthors undertook. The IRS measurements are important characterizations of the mobility opportunities available today in different communities, but they will not suffice for building the monitoring infrastructure the country deserves.

In the 40 years since the last mobility survey, American society has seen a dramatic increase in aggregate income inequality, a growth in immigration and a consequent change in the nation’s racial and ethnic composition, the emergence of complicated family arrangements, the decline of manufacturing and rise of a service economy, a spectacular takeoff in female labor force participation, an equally spectacular takeoff in incarceration, and the rise of new profiles of educational investment and new types of job training. These are big changes with potentially big effects.

We cannot rule out the possibility that some of them have brought about an unprecedented reduction in opportunities to get ahead, but we’re working in the dark without the capacity to monitor whether this country is living up to one of its most cherished commitments.