Seven small yellow tricycles stand alongside a fence in the playground at Malcolm X Elementary school in Washington D.C., and a group of kids who are clearly too big to ride them climb on, preparing to race.

It is a rare opportunity for play for some of these children who live in the D.C. General Homeless Shelter, the city’s largest facility of its kind. The shelter is situated in a former hospital and has been beset with problems for years.

But since 2012, the Freedom School operating at the shelter has offered the children there a chance to spend their summer playing games and racing bikes, but also focusing on learning, history, citizenship. 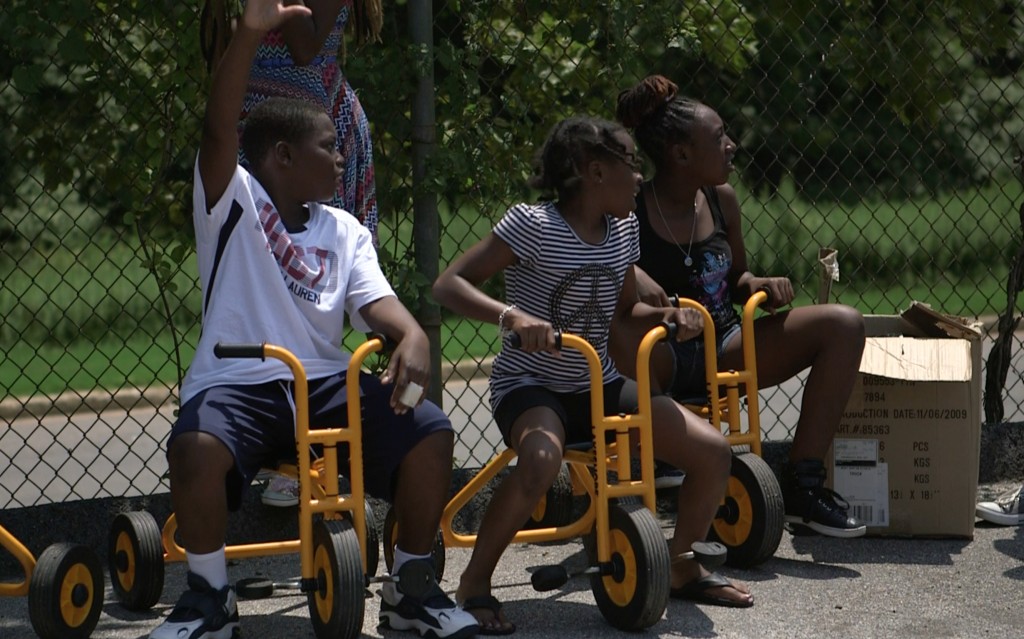 “It actually gives them an outlet,” said Dennita Ferrell, the school’s project director.  “We give them hope.  We give them a means of know how.  We allow them to simply be kids.”

The Freedom Schools were inspired by those started during 1964’s Freedom Summer as part of the Civil Rights Movement in Mississippi.  The early schools in churches and community centers around the state utilized the services of hundreds of mostly-white, college-age volunteers from across the country who came south to support the cause. They risked violent attacks to help young black children learn skills, citizenship and history.

Outdoor games like the tricycle and relay races, tug-of-war and basketball exist alongside the more academic activities, like reading, which is emphasized and practiced throughout the day.

“Some of the scholars may not be on the reading level they should be at per grade,” Ferrell said. “However, we find those things out, we do one-on-one, and it actually empowers them to want more.”

Across the country, Freedom Schools serve a different group of children at the Los Angeles County juvenile probation camps. A pilot project that started last summer serves about 160 young, male offenders between the ages of 14 and 18.  They are primarily African-American and Latino.

All schools begin each morning with what’s known as “Harambee,” a mix of chanting, cheering, reading out loud and singing. The Swahili word means “Let’s pull together.” At the school in Los Angeles, probation officers, offenders and staff move, speak and cheer in unison during the morning ritual.

“Man oh man, the culture has changed,” said Joshua Garcia, a staff member at the Omega Freedom School, who worked last summer in the juvenile detention camp schools. He’s clearly proud when he mentions that there are more than twice as many schools this year.

The Children’s Defense Fund has been working to combat what it calls the Cradle to Prison pipeline, the social circumstances that lead to significantly higher numbers of Black and Latino children being incarcerated than white children. The Freedom School sites in probation camps are designed to give children there the chance to build self esteem and positive attitudes toward learning.

Regardless of the crimes committed by these young men, which range from home invasion, aggravated assault and other violent offenses, they are still expected to participate, learn, read and discuss.

“You have to let these kids think for themselves and present them with the idea, give them the best you’ve got and see what happens,” Garcia said.  “Education is education, and it needs to happen.”

This story and PBS NewsHour’s education coverage is part of American Graduate: Let’s Make it Happen, a public media initiative made possible by the Corporation for Public Broadcasting.