Narratives around queer history are often told from the perspective of major coastal centers of queer activism, such as the Stonewall Riots in New York City or the openly gay Harvey Milk running for office in San Francisco. But activists and historians across the country this week are mourning leader Jim Toy, widely believed to be the first person in Michigan to publicly come out as gay, who died Jan. 1 at the age of 91.

Toy is remembered as a pioneer who spent his life advocating for LGBTQ people and working for human and civil rights for everyone, though he did not enter the national consciousness as deeply as other wider-known queer activists such as Milk, Marsha P. Johnson or Bayard Rustin.

“Jim Toy’s life is a reminder that LGBT history and LGBT civil rights were also made here in the Midwest, and that Asian Americans and other people of color were a critical part of that movement,” Ian Shin, a University of Michigan assistant professor of history and American culture, told the PBS NewsHour.

Toy was known across the country as a leading Asian American advocate for the LGBTQ community for more than 50 years, working at the community, collegiate, state, and national levels.

Toy’s legacy “is the courage he helped so many of us find within ourselves through his support, encouragement, and belief that we each deserved all of what we wanted for ourselves in this life,” Will Sherry, director of the University of Michigan Spectrum Center, told the NewsHour.

Toy’s role as community elder is also important. “It means so much to have elders in queer community. To have people you can see yourself in, who believe in your value and worth and the possibilities for your future that you sometimes cannot see for yourself,” Sherry said. “He represents the opportunity we all have to create space for others to live into who they are. He represents possibility.” 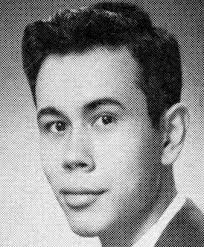 Toy was born in New York in 1930 to a Chinese American father and a Scottish Irish American mother. His mother died when he was born, so his father moved them to live with his maternal grandparents in Granville, Ohio, a small village in the central part of the state.

Toy’s father later remarried. Toy recalled that they were one of only three families of color in the village, which at the time had a population of about 1,200. During World War II, when anti-Japanese sentiment was at its highest, his white stepmother sent him to middle school with a cardboard sign around his neck that read, “I AM NOT A JAP.”

But aside from that, Toy would recount in his adult years, there was little discussion of race, and none of sexual orientation, while he was growing up. He said that he did not even know what the words homosexual or gay meant until someone told him years later that he was gay, which he denied for some time longer.

“My ‘identity’ is a tapestry of many threads — race and ethnicity, color, class, gender identity, sexual orientation, ability/disability, appearance, age, religious belief, political belief,” Toy said in a 2015 interview with NBC Asian America. “If one of the threads is plucked, the whole fabric is bound to move. Anyone struggling to consolidate and manifest any thread of their identity may find help from allies — and possibly from counseling or therapy.”

An early leader in LGBTQ activism

While living in Ann Arbor and working as a church music director in 1970, he said he saw a notice for a “gay meeting” at St. Joseph Episcopal Church in Detroit, an integrated Episcopal church in Detroit which also supported the Vietnam War draft-resistance movement and was the site of the Freedom School in the 1960s. He said although he was afraid that if he went to the meeting, that would mean that he was actually gay, he went and became a founding member of the Detroit Gay Liberation Movement (DGLM). A few months later, he co-founded of the Ann Arbor Gay Liberation Front (AAGLF).

Toy was also a conscientious objector during the Vietnam War. On April 15, 1970, the DGLM participated at an anti-Vietnam war rally at Kennedy Square in Detroit. The person that was supposed to speak on behalf of the group suddenly changed his mind, and at the last minute, Toy stepped up. He said he had never spoken in public before, but he scribbled some notes on a notepad, and he introduced himself with his name, his age, and said that he was gay. The rally was covered by local media, and it is widely believed that Toy is the first person in the state of Michigan to publicly come out as gay.

“Like many Asian Americans of his generation, the racism as well as the homophobia that Jim faced led him to protest injustice and oppression not only here in the United States, but also overseas,” Shin said. “His life is an inspiring example of how all these issues intersect, and how our activism can also.”

In 1971, pressured by the AAGLF, the University of Michigan created the Human Sexuality Office, the first staffed university office in the country – and, as Toy was known to say, “likely the world” — to address sexual-orientation concerns. There, he served as co-coordinator together with Cynthia Gair and as gay male advocate from 1971 to 1994. The office was later renamed the Spectrum Center, which recently celebrated its 50th anniversary, and currently works for the concerns of transgender, bisexual, lesbian, gay, and queer students and allies. 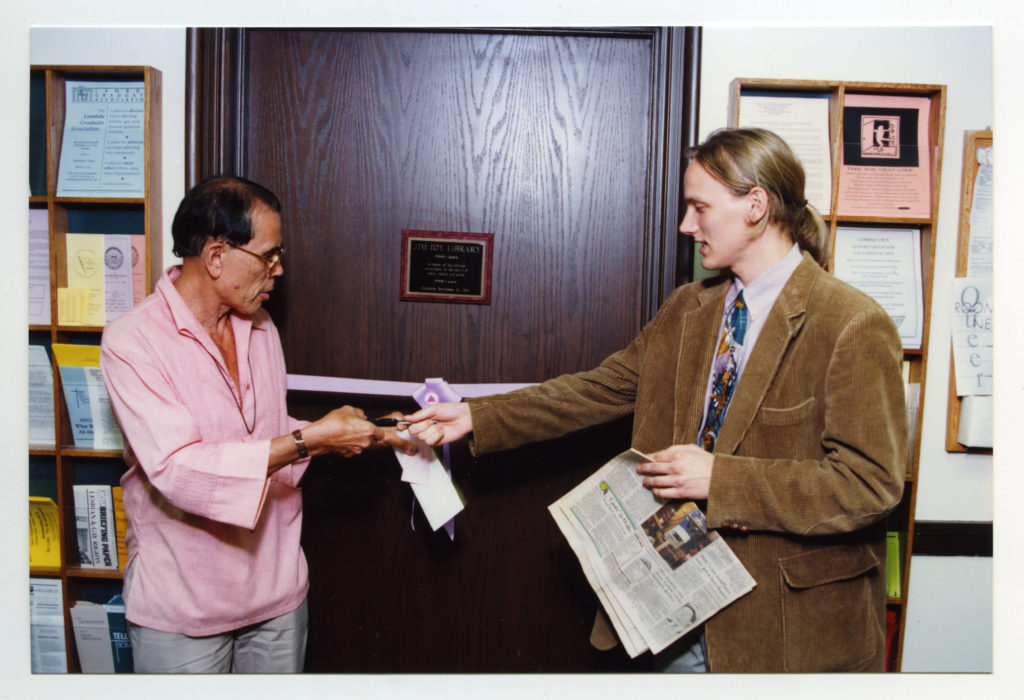 “Jim’s legacy is deep within LGBTQIA+ higher education,” Sherry told the NewsHour. “Jim anchored the work of our office in support and advocacy. He sought to support and help those who were struggling while at the same time hold accountable the institutions and structures that perpetuate harm. He worked to change the world we live in, to make it better, and he did that through his actions each day.”

While working at the Spectrum Center, Toy also completed a master’s degree in social work at the University of Michigan. Sherry, who attended the School of Social Work decades later, appreciated Toy’s dual roles as both community leader and social worker. “He taught me how to center my values and ethics within myself and to live those out all the places that I go,” Sherry said.

Toy also fought a 21-year battle with the University of Michigan Regents to amend its bylaws to include non-discrimination due to sexual orientation. He worked with the Michigan House of Representatives to try to expand Michigan’s Elliott-Larsen Act to include sexual orientation, gender identity and expression as protected classes. He co-authored the city of Ann Arbor’s first “Lesbian-Gay Pride Week Proclamation, believed to be one of the first issued by any governing body in the U.S., and he co-authored the city’s non-discrimination policy in regard to sexual orientation and gender identity and expression. He founded and served on many HIV/AIDS organizations and task forces. A University of Michigan library is named in his honor, a community resource center is named in his honor, and the city of Ann Arbor named April 29 — “Jim Toy Day.”

“The legacy of Jim Toy’s work has been one centered on inclusion. He was passionate about visibility, community, and advocacy.” Joe Halsch, president of the Jim Toy Community Center, told the NewsHour.

Toy often said he preferred to use the term “TBLGQI” instead of the more commonly used “LGBTQIA” in order to invert the power relationships and to prioritize transgender and bisexual people, whom he said are at the greatest risk of harassment, discrimination, and assault. He said that in the 1970s, it took a decade to convince many groups to list lesbian before gay as in LG instead of GL which he saw as sexist. 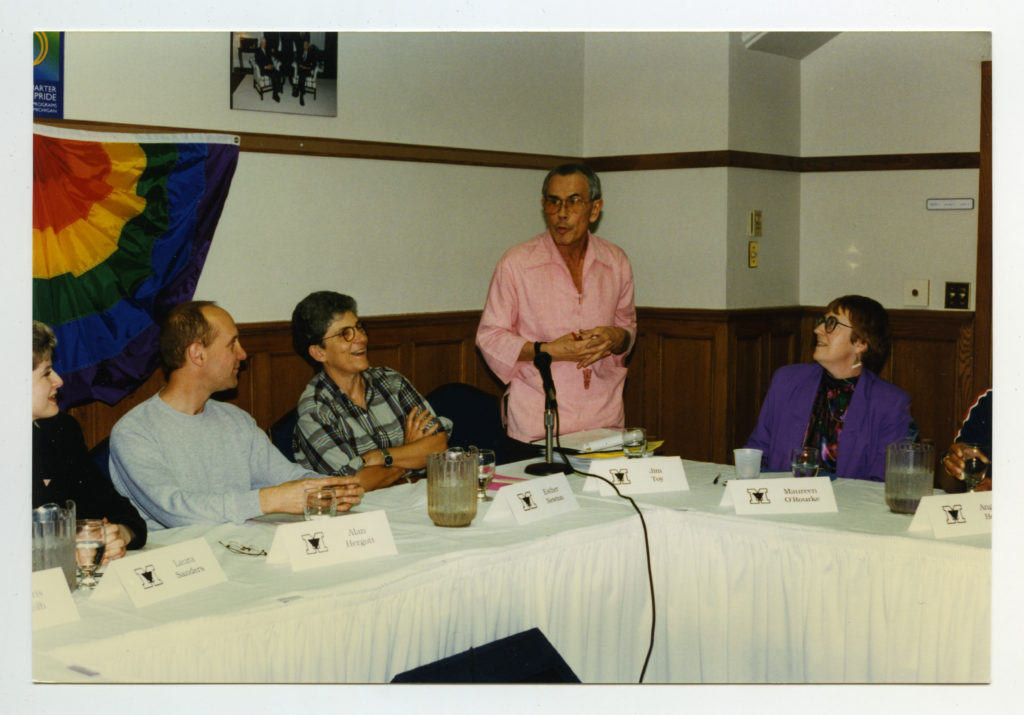 Roland Hwang, a lecturer at University of Michigan who helped nominate Toy for an honorary doctorate, which Toy received in 2021, noted that despite his many accolades and recognitions, “Jim always, year after year, made time to come to the classroom to talk about his humble childhood in Ohio, about gender and its meaning, and his views for effective advocacy.”

Ron Aramaki, another University of Michigan lecturer, told the NewsHour that Toy was an agent of change as well as a Renaissance person. “He was a musician, a natural leader, a speaker of truth, a powerful force for social change, and a good friend for many years.” 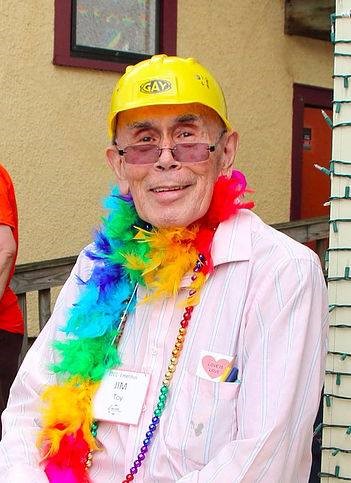 In a series of tweets, Dingell wrote that Toy was a champion for equality, a trailblazer for LGBTQ rights in Michigan but also across the country, and a dear friend to her and her late husband, former U.S. Rep. John Dingell. “Often I think about Jim’s words, ‘I am committed to making as much trouble as I can to create and maintain justice.’ He fought with every bone in his body to support the LGBTQ community, to fight for marriage equality, to ensure protections for so many.” 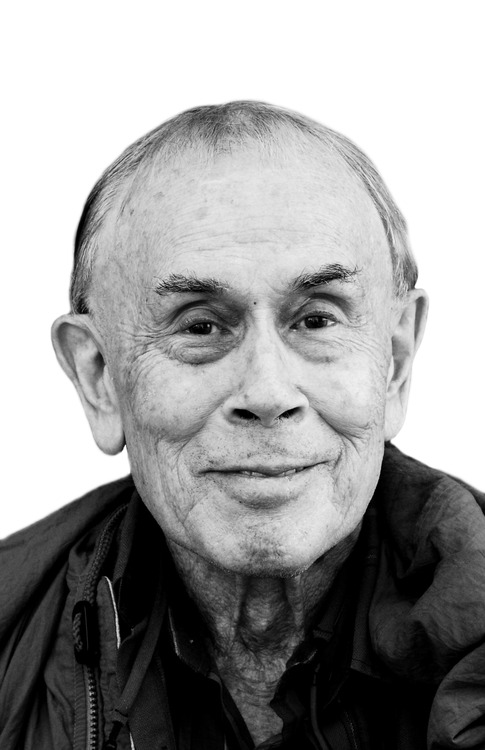