The “walk-ins” were held before classes and were organized by a grassroots movement pushing for a 20 percent raise and more than $1 billion in new education funding. Arizona’s demonstration is part of a wave of educators in Republican-majority states demanding higher pay. West Virginia teachers were the first to go on strike and won a 5 percent raise. Oklahoma’s two largest school districts have been closed for nearly two weeks because of a teacher strike and Kentucky educators called in sick to protest pension reform.

“I really feel very strongly that public education is ground zero right now in our fight for democracy.”

Wednesday’s walk-ins were held at 1,112 schools spanning 130 districts in Arizona, according to Arizona Educators United. The state Department of Education says that Arizona has 1,700 traditional public schools and more than 500 charter schools.

“I really feel very strongly that public education is ground zero right now in our fight for democracy,” said Karen Gifford, whose child attends Pueblo Elementary. “I know too many teachers who work second and third jobs just to support their families.”

Arizona teachers are among the lowest paid in the nation. According to the federal Bureau of Labor Statistics, Arizona elementary teachers earned a median wage of $43,280 in 2017 and high school teachers $46,470, the 3rd and 6th lowest in the nation, respectively. Adjusted for local cost of living, federal figures show elementary teachers actually rank 49th in earnings and high school teachers 48th.

Stephanie Perry, a 36-year-old single mother of two and a special education teacher at Tuscano Elementary School in Phoenix said she makes $36,000 annually and lives with her parents.

“I’m not the only one here struggling at this school,” she told fellow teachers during the protest outside the school.

Fourteen-year-old Andi Breit, a former Tuscano student whose mother is a teacher there, said she supports the #RedforEd campaign because her teachers have supported her.

“Teachers have really, really helped me get over a lot of things,” she said. “I support them being paid a lot more than they already are.”

Leaders in the Arizona movement say that while the salary raise is important, the group is also seeking increased pay for support professionals, a permanent raise structure and a freeze on corporate tax cuts until per-pupil spending reaches the national average.

Marta Gontarz, who has taught at Tuscano Elementary for 18 years, said she often buys school supplies for her third-grade students using her own money, including ordering books on Amazon and craft supplies.

“I would do whatever I need to do for my kids,” she said.

The demonstrations were organized under the umbrella of Arizona Educators United, a grassroots group that mobilized teachers and supporters across the state through their #RedforEd campaign.

But so far Gov. Doug Ducey and the Republican-controlled Legislature haven’t budged to the group’s demands.

On Tuesday, Ducey defended his school funding plan, which includes a 1 percent teacher raise, and has been touting his promise of $100 million in funding for districts this year as a start to restoring nearly $400 million in cuts.

At a high school in the Phoenix suburb of Glendale, science teacher Lindsay Walls was among about 50 teachers who started their day early to demonstrate. She criticized Ducey’s stance. 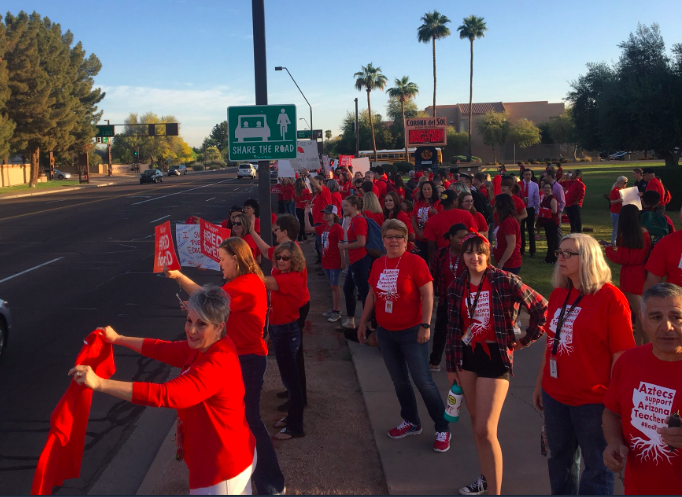 “If he’s under the impression that there is funding coming to our schools, then he should come visit us at Apollo High School, he should come to one of our football games and go ahead and join us in the bathroom sometime and see what our facilities look like,” she said.

On Monday, Arizona Educators United told their 35,000 Facebook members to prepare for a possible walk-out that would close schools.

Ducey, who is facing re-election, called talk of a teacher strike a partisan ploy.

Gontarz, the third-grade teacher from Tuscano, said she’s encouraged by the activist movement.

“It’s good to finally see Arizona coming together to try to get a better, competitive wage, and better funding for our kids,” she said. “It’s time they heard our voice.”