“Cindy,” a very slight young woman with long brown hair, sits on a bench looking out at Miami’s Biscayne Bay. The serenity here is profoundly different from the violence she left behind in Honduras. Cindy, who asked the NewsHour not to use her real name, said she fled an abusive home at 14 and lived on her own for the next three years.

“There are problems in my country, a lot of bad things, a lot of crime,” she said. “People killing for the sake of killing.  Many kids are alone because their parents are dead.” 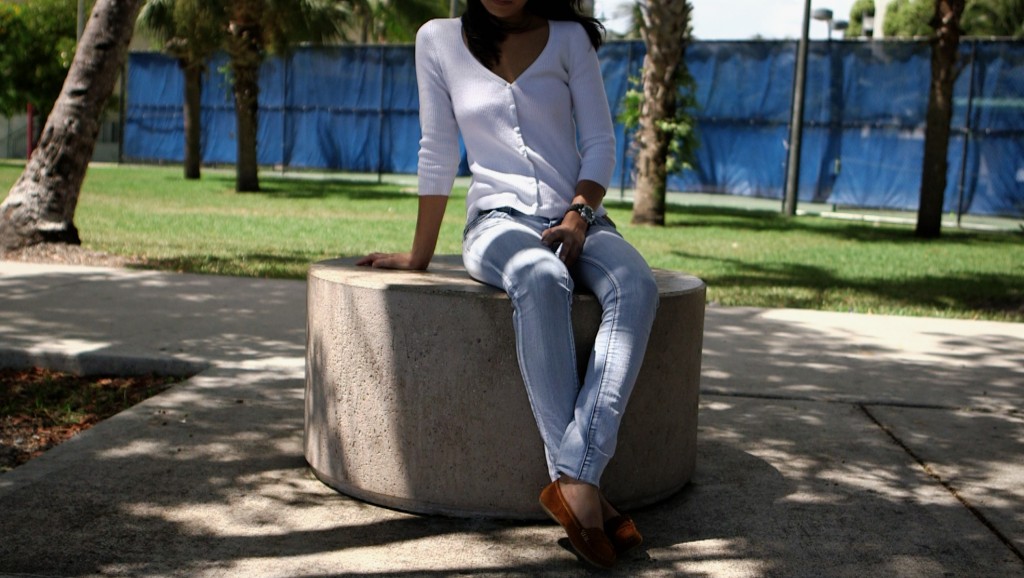 “Cindy” fled violence in Honduras last year and waited for months as her claim for asylum went through Immigration Court in Miami, Florida. Photo by Mike Fritz/PBS NewsHour

Honduras is one of Latin America’s poorest nations,  according to the U.S. State Department, and has the highest homicide rate in the world.

“The crime, the abuse, these are some of the reasons that I’m here,” said Cindy.  “It’s very different down there, there are no laws to protect us.”

Cindy felt that her life would be in danger if she stayed, so last year at the age of 17, she left her hometown in the Olancho Department municipality in Honduras with only her birth certificate and the clothes she wore and started her journey to the United States.

Cindy traveled north with a group of six men she didn’t know. “I was the only woman,” she said. “I thank god that they didn’t do anything to me, they treated me like a sister.”

The group started the journey on a bus, but eventually reached the Mexican desert. By then, more men had joined the group and they crossed on foot with little food and one bottle of water each.

“If you drank it all up you might die. When it ran out you’d fill it with water from puddles or any other way possible,” Cindy said.

After days in the desert, Cindy and her traveling companions made it to the Rio Grande, which separates Texas and Mexico. They crossed the river in two rafts.

“If you fell off, you drowned,” Cindy said.

Eventually the group made it into the U.S. and was caught by the Border Patrol. Cindy described being held in a very cold detention facility before being transferred to a shelter in Pennsylvania. Later she was released to a sponsor, a distant cousin in Miami. She now lives in South Florida as her case makes its way slowly through immigration court.

Even though she lived on her own for three years from the age of 14, Cindy was able to work during the day and take enough classes at night to earn her high school diploma in Honduras. She is now taking an English class for adults at a Miami high school and eventually wants to become a doctor.

She is thankful she has the opportunity to finish grow up here, but still wants to caution other children who may be thinking about making the same trip.

“Kids don’t know how dangerous the journey is, they could be abused or die,” she said.

Making the case to stay

Cindy is among tens of thousands of unaccompanied migrant children who have arrived at the U.S.-Mexico border in the past year. In July, U.S. Customs and Border Protection reported that more than 52,000 children had been apprehended there as of mid-June of its fiscal year. About three-quarters told authorities they came from El Salvador, Guatemala and Honduras.

Earlier this month, the Department of Homeland Security reported that the number of unaccompanied children detained at the border has declined over the past few months. But that still leaves thousands of children like Cindy making claims to stay in this country.

Many apply for relief under terms provided in the William Wilberforce Trafficking Victims Protection Reauthorization Act of 2008 (or TVPRA). The law was designed to enhance measures to combat all types of human trafficking and made it harder to quickly deport children from non-contiguous countries.

But no matter their age, the minors asking for asylum in this country are not provided a lawyer free of charge, which concerns Cheryl Little, executive director of the non-profit legal services organization Americans for Immigrant Justice.

“The United Nations High Commissioner for Refugees issued a report in March of this year,” Little said. “I think that over 400 children have been interviewed, and the UNHCR determined that roughly 60 percent of those children had potential claims for a relief there. They are not entitled to a free attorney, so unless groups like ours are able to step up to the plate … these children have little to no real opportunity to make their case to stay here.” In many cases, she says, being deported is a virtual death sentence for these kids.

According to Little, the children her lawyers meet with usually don’t speak English, don’t understand the legal system and haven’t brought with them evidence that might help prove their case.

“Immigration proceedings are intimidating for adults, so you can only imagine the difficulty for a child to be sitting there before an immigration judge,” said Farah Jamette, a staff attorney with Americans for Immigrant Justice who also represented Cindy.

“There is a government attorney who has been trained, has gone to law school, and their effort is to deport these children, or at least explain us to the reasons why they shouldn’t be allowed to stay,” Jamette said. “So it’s very difficult for these children to sit there in immigration court…

The sheer number of children seeking relief in immigration court has not only been daunting for the relatively few lawyers representing these children pro bono. In July, the National Association of Immigration Judges (NAIJ) sent letters to leaders in the U.S. House of Representatives and Senate, calling the “unprecedented surge in the numbers of unaccompanied minors who have presented themselves at our southern border seeking shelter” a “complex and urgent situation.”

The NAIJ letters stated there were only 228 full-time immigration judges dealing with more than 375,000 cases nationwide. The average time to reach a decision is now 587 days — more than a year and a half — according to the letter.

The letters also referred to the special needs of children and juveniles in the legal system, and that the 2008 TVPRA law created special provisions for minors seeking to stay in the country under the law, including creating a non-adversarial atmosphere in the courtroom and helping children access legal service as often as possible.

But some believe the law may often be used by children who don’t actually qualify.

“The terms of the trafficking law apply to people who are unaccompanied,” said Jon Feere, a legal policy analyst at the Center for Immigration Studies. “By definition, an unaccompanied alien child is a person who has no lawful immigration status in the U.S., has not attained 18 years of age and does not have a parent or legal guardian inside the U.S. What has been determined, though, is that most of these kids do have parents with them, and those who don’t, have parents or legal guardians in the United States, overwhelmingly.”

Feere said that some children who come here unaccompanied do have legitimate claims under the law. But the majority don’t fit the federal legal definition of “unaccompanied alien child” or have technically been “trafficked,” he said.

“In the instance where we are talking about some sort of coercion, where the kid is somehow actually without his parents, his parents never called upon smugglers, the kid was maybe kidnapped, kids being used for sex trafficking — that’s when this law would apply,” Feere said. “When it’s shown that it’s not that case, these cases should be treated just as any other case of illegal immigration.”

It turns out that Feere, Cheryl Little of Americans for Immigrant Justice and the NAIJ agree on one point — there is a very serious backlog in the immigration courts. Feere recently sat in on proceedings in Arlington, Virginia.

Cheryl Little admits her group is also swamped and recently published a report documenting their experiences.

“Last year we provided services to over 1,600 children, [and by] the end of July we’d almost reached that mark of this year,” Little said. “We had two judges for a number of years who were assigned to the children’s docket here in Miami and between them they heard about 150 cases a month. As of end of July we had three judges hearing 150 cases a day. We are now up to five judges. I could go on and on, I mean, the numbers are overwhelming.”

The backlog of immigration cases means thousands of children who’ve crossed alone illegally wait months or even years for their cases to be adjudicated. And that means many are here long enough to enroll in school.

Most children who come across the border unaccompanied have not finished high school and don’t speak much English. Oscar was 12 when he came to the U.S. from Honduras with his 17-year-old sister earlier this year.

He’s now enrolled in a middle school in Miami. The Miami-Dade County Public Schools have recently received a large influx of students from Central America, like Oscar. More than 2,000 have enrolled since June — more than 900 come from Honduras alone.

Riverside Elementary School in Miami’s Little Havana neighborhood is one of the most affected schools in the district. More than 70 new students from Central America have enrolled there since June, and a majority came from Honduras.

And it’s not just a lack of English language skills, or that these new students may be behind academically, that the school has to be concerned about, according to principal Erica Paramore-Respress.

“The most pressing need that these students may have a lot of times is the social-emotional component that comes along with whatever these kids may have been exposed to,” said Paramore-Respress. “So that in of itself is traumatic, to come over, and then you are very young and now you are in a totally different country where you may or may not know anyone else. So once you get here, we try to establish a nurturing environment with our teachers but we also have our counselors on board.

“Identify and collaborate with social agencies both in your community as well as statewide; they are responsible for the accommodation of children coming in,” Carvalho said. “Secondly, develop relationships with the federal government to accelerate the pipeline of federal funding, specifically Title 3, funding that addresses the needs of English language learners.”

Not all schools and districts around the country have been as welcoming.

In May, the U.S. Departments of Justice and Education sent a joint “Dear Colleague letter” to districts around the country, following reports that some schools may have discouraged or even excluded children from registering, based on their actual or perceived immigration status.

The letter, from the Civil Rights offices of both departments, sought to “…remind [schools] of the Federal obligation to provide equal educational opportunities to all children residing in your district and to offer our assistance in ensuring that you comply with the law.”

For the Miami-Dade schools district, this is not the first time it has dealt with large numbers of foreign-born children enrolling in a relatively short period of time.

“Whether we are talking about the Mariel boatlift, particularly involving Cuba, the arrival of thousands of Cuban children or Nicaraguan children after the civil war in that nation, or more recently after hurricanes or earthquake destruction in Haiti, the fact is that we pick up hundreds if not thousands of children,” said Carvalho. “So we know how to do this, we are adept at this type of challenge.”