Introducing games into the classroom can transform learning 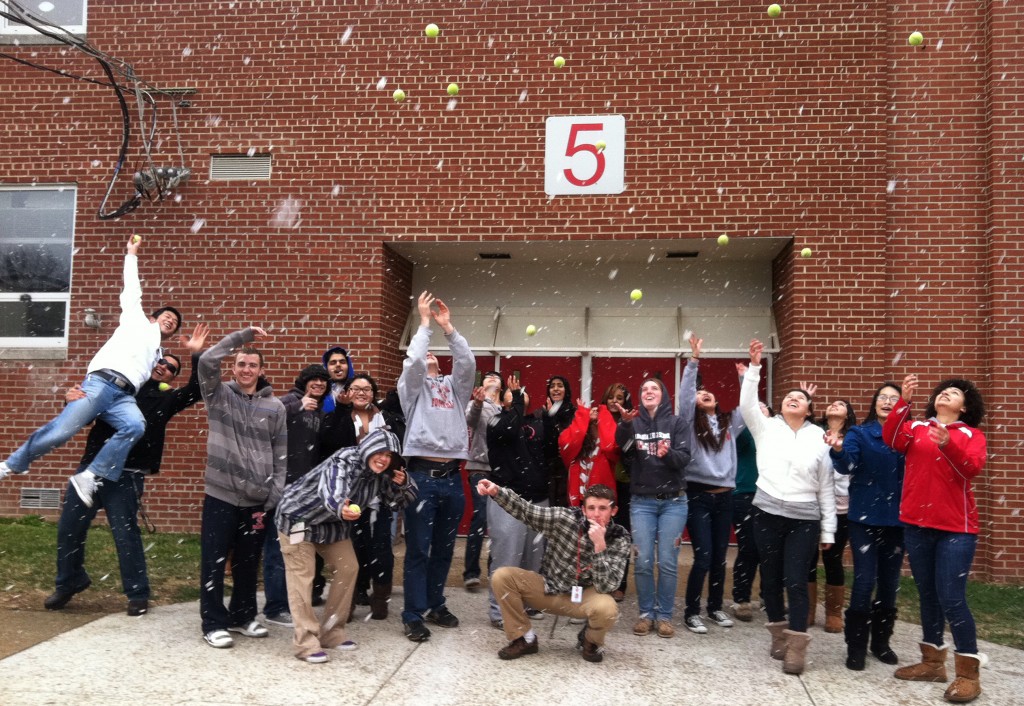 Getting students to move and “play” as part of classroom activities can have many benefits. Photo by Katie Gould

Welcome to the first installation of “The Teachers’ Lounge,” a forum where the often overlooked voice of teachers can be heard. Through our regular blog we will address trends, best practices and the real challenges educators, students and families face every day. In conjunction with the NewsHour’s American Graduate profile of a school that uses games as a tool for engagement, our blog further explores play in the classroom and research that suggests it can be a helpful strategy for teachers.

The Pirates of the Caribbean theme song was blasting, desks were arranged in groups and I was greeting all my high school freshmen who dared to come in with, “Ayeeeee ye smugglers be warned!” and, “ARRRRRGHHHH!”

Once everyone was settled, I explained the rules. Each group had the same goal: produce five specific items using the resources in their envelope. You probably can see where this is going; the groups were all given different resources (for example, a ruler, glue paper clips, etc.) making some groups “wealthy” and other groups “poor.” Students were instructed to trade, beg, borrow and steal (if I caught them stealing they went to “jail,” a chair in the corner, for three minutes) in order to complete their task. The first team to successfully produce all five items won.

It started off calm. Students were too caught up in gloating or scowling as they reached into their envelopes and realized what was inside.

As I’m sure you can imagine, the scene quickly devolved into chaos. The “wealthy” groups were working on making their products and trying to ward off those who would cheat them with a bad bargain or outright theft.

Shouts of protest were coming from the “have nots,” who looked overwhelmed thinking about how they were going to win with a single paperclip and some students circled the desks of others like sharks, waiting for the right moment to steal a glue stick.

At the end of the simulation there were winners and there were losers, but everyone who played had a lot to say about their experience as we reflected individually and as a class. The biggest win of the simulation came after I revealed to them that what we had just done was learn about economics and my students made me promise to teach economics again soon.

As a teacher who now helps others bring current events into the classroom, I’d like to clear up a few misconceptions about games in the classroom, since it has become such a hot topic lately.

Myth — Games in the classrooms mean that kids are sitting around playing Oregon Trail all day.

There are some great video games to enhance learning, but games in the classroom movement has more to do with a style of teaching than figuring out how you are going to get a class a set of Wii controllers.

Myth — Kids in these game style classrooms aren’t getting grades.

I hear this all the time, particularly from non-teachers who tend to become very excited and or horrified about it. The absence of traditional letter grades A-F has a lot more to do with a school being non-traditional in general and so schools that focus on games often fall into this category. But not getting a letter grade doesn’t mean zero accountability. Teachers are usually giving more in-depth written feedback about a student’s level of achievement which will include artifacts from the student’s collection of work.

Myth — Games in the classroom means you must have the latest technology and every kid needs a device.

As someone who taught in a school that was not “wealthy” resource-wise, I am extremely sensitive about the digital divide and hesitate to endorse technology in the classroom that contributes to it. However, games in the classroom doesn’t necessarily mean every kid needs a tablet. In the conversation about bringing games into the classroom the terms “high-tech” and “low-tech” are used to describe the technology needed, and for me “low-tech” games, like the Pirate Day simulation, were super effective.

Myth — Games in the classroom are an excuse for teachers to take a break from teaching.

As any seasoned teacher knows, games and simulations take way more effort to prepare and execute than a regular old lecture or Power Point. The Pirate Day simulation took more than an hour to prepare the materials for each class. Further, managing controlled chaos can leave you exhausted. Don’t get me wrong, games are a great tool to have in your arsenal, but having the creative juices and energy to bring a full blown game to life every day might not be realistic.

Myth — ALL kids love games and ALL behavior problems will magically disappear!

Not all students love games in the classrooms, in fact some downright detest them. A few of the usual suspects who might throw a wrench in a game are:

The good news is that teachers can usually give these kinds of kids a heads up and remind them about the real purpose of the game and they’ll fall in line. Or the group assignments can balance the strongest personalities.

I wish I could tell you that Pirate Day was all my idea, but it was not. My department chair gave me the idea and I ran with it because even with very little teaching experience I knew this simulation was golden. How? Before I became a teacher I spent three years doing neuroscience research and had a pretty good idea about how the brain worked. A lot of that research was for the purpose of developing new medications for folks with addiction disorders, so my understanding of the brain’s reward system is pretty solid. Here are a few neuroscience principles that explain why games are effective learning tools:

If you want kids to focus and sustain attention you have a few options:

If you want your students to excel in learning at their highest level:

Like any trend in education that comes our way, my advice for teacher is, check it out, take what’s useful from it and don’t stress if it doesn’t work for you or your class. Games in the classroom worked and made sense for me, but that doesn’t really mean anything to the teacher in the classroom next to mine. If you’re interested in learning more about games in the classroom and even a school where it’s all games all day for one 6th grade class check out our American Graduate story on the PlayMaker School. Interested in trying out game based learning in your classroom? Try our NewsHour Extra active learning resources.