In 2006, Corey Clark was a typical college freshman.

Well, maybe not typical. He was 18, had just graduated from high school and was living on his college’s campus. But he was taking 22 credit hours, many more than a standard full-time schedule, and had to get permission from the president’s office to register for such a heavy courseload.

He wasn’t having any trouble keeping up with the work. Even so, during a weekend at home something one of his friends was doing seemed more compelling than Clark’s challenging course load.

“A buddy of mine had joined the Marines and I went with him to a function that was going on where people going to bootcamp get together to workout and they were doing a scavenger hunt where you had to find all of these places on a map,” he said. “I signed that day.”

In December 2006, instead of being 22 credits closer to a college degree, he was on his way to bootcamp.

Four years later, with his re-enlistment papers already signed, he made another gut decision. 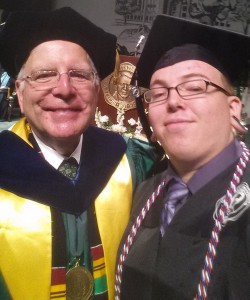 “I was tired of missing birthday, births, deaths, graduations — all of these big life events — because I was so far away,” he said. “So I decided to come back home to work on my degree.”

By 2010, Clark was typical of another, growing group of college students — those who are out of high school for more than a year before enrolling, who work while going to school, or who are parents, spouses or veterans. These so-called nontraditional students could be the face of who enrolls in college in the United States today, more so than the 18-year-olds — living in dorms and partying on weekends — we imagine filling the country’s campuses.

About one-third, 33 percent, of the country’s undergraduates were 25 or older in 2011, the most recent year for which federal data is available. While 12 percent of students enrolled in the country’s public four-year colleges were 25 or older in 2011, at Marshall University in Huntington, West Virginia, they made up more than 20 percent of undergraduates when Clark enrolled. Students 22 and older accounted for 38 percent of Clark’s classmates that year. And the campus was about to make changes aimed at better serving their students.

Across the country campuses are opening centers dedicated to the needs of nontraditional students. Who qualifies as nontraditional varies from school to school, but common criteria include being 25 or older, being out of high school for multiple years before enrolling, being married or divorced, having children, working more than 20 hours a week or being a veteran.

“Adult learners are juggling family, work and educational responsibilities. They don’t do optional.”
Part of the reason for the focus is certainly the growing number of these students on college campuses. The number of students 25 and older enrolled in college grew 41 percent between 2000 and 2011, according to federal data.

The economy may be driving older students back to schools, according to Kevin Kruger, president of the National Association of Student Personnel Administrators.

“What we are uncovering is that the path to social mobility and economic success in our country runs through a college degree and not enough of our citizens have a college degree,” he said.

It’s vital for colleges and universities to draw in more nontraditional students if the country is going to meet projected demands of the future workforce, he added. Researchers at Georgetown University estimate by 2020, more than 60 percent of jobs will require some credential past a high school diploma.

That imperative might be especially strong in West Virginia.

“We’re the oldest state in the nation,” said Andrew Gooding, director of Marshall University’s Regent Bachelor of Arts Program. “We’ve been talking about what we can do to reach out to adult students.”

Since the 1970s, West Virginia’s public colleges have offered what they call a Regents Bachelor’s degree. The requirements are more flexible than traditional college majors; many classes can be taken online and students can be awarded credit for work or military experience.

With an $800,000 grant from the Lumina Foundation (The Lumina Foundation is also a funder of the NewsHour), West Virginia planned to raise the profile of the Regents program as part of an effort to shepherd 4,600 state residents over 25 with some college credit but no degree through completing a bachelor’s and 3,000 more through an associate’s.

“In West Virginia, we tended, in student affairs, to have a culture of anecdotes when talking about services and things we provided for adults” said Sarah Beasley, who led statewide initiatives for the state’s Higher Education Policy Commission until earlier this year. “So we worked hard to encourage more of a culture of evidence.”

Staffers from around the state were trained on what works for older students and those juggling work, family with school. Most of them went back to their campuses and started new programs, according to Beasley.

At Marshall that included opening campus offices an hour earlier and letting more business, like paying tuition or registering for classes, be done online and over the phone. The school also developed an online orientation for new students with optional modules for veterans and other students with special concerns. The campus hired a new military and veterans affairs director this winter to connect vets with services they need.

While steps like these may not seem revolutionary, they make a difference, according to Maggie Culp, a higher education consultant who worked with West Virginia on its DegreeNow initiative.

“Adult learners are juggling family, work and educational responsibilities. They don’t do optional,” Culp said. “They do not respond well if institutions waste their time, give them incomplete or inaccurate information or ask them to follow policies designed for 18 to 22 year olds.”

Before those changes, Clark said it was hit or miss getting all of the information he and the other veterans he knew needed. He originally enrolled in the athletic training program, but transferred to the Regents Bachelor’s program when he found out about it as a junior.

“It would have been nice if, whenever I got to Marshall as a vet, someone had told me, here’s all the degree programs and there’s also the RBA program,” said Clark. He added that there was someone assigned to help veterans on campus, “but, with no programs in place you only knew about her if you talked to another vet.”

As Clark was finishing his Regents Bachelor’s degree with emphases in religion studies and psychology, James Light was just getting started. And Light’s re-entry to higher education at 44 was smoother than the younger Clark’s.

Light, a retired Marine, spent months mulling the idea of using his GI Bill benefits to finish the college degree he started at Marshall in 1987. He met with representatives at the education center at Camp Lejeune in North Carolina, where he still works. But he left those meetings unconvinced. Most schools would not honor the credits he earned more than 25 years ago and wouldn’t give him all the credit he felt he was due for his military experience.

Early this year he looked up Marshall’s website on a whim and got in touch with the campus’ new veterans affairs director, who suggested he look into the RBA program.

When he talked to school representatives on base he thought “they were more interested in maximizing the amount of money they could get from my GI Bill than they were my success as a student,” Light said. “Every single person I spoke to at Marshall seemed to go out of their way to make my transition back into the school environment as smooth as possible. The conversations I had with these people weren’t business-like. They were more personal.”

Marshall gave him more credit for his military experience than the school with representatives at Camp Lejeune and honor all of his credits from 1987 and 88, Light said. Taking all of his classes online, Light plans to finish his degree by December 2015.

As more colleges tune in to the needs of the country’s new college students the changes at Marshall may become more ordinary. Tammy Johnson, the school’s admissions director, said they’re still looking to ease the road to a degree for busy adults. This summer the school launched a web page where people considering enrolling can find out how many of the credits they’ve earned at other schools will transfer to Marshall.

“It used to be you’d have conversations about enrollment issues, recruitment, retention and you might have a person or two people say ‘let’s not forget about our adults,’” Johnson said. “Now it’s when we have conversations about programs, retention, recruitment initiatives — we talk about the different paths you would take to reach different populations.”

Left: The Marshall University campus in Huntington W. Va. has always enrolled a high percentage of adult students, according to Tammy Johnson, the school's's director of admissions. But now the university is doing more targeted recruitment of those over 25 or who have been out of the education system for years.