Colleges warm up to tuition freezes to keep students in-state

This summer, the board that governs New Hampshire’s public universities voted to take the unprecedented step to turn their system’s two-year tuition freeze into a four-year guarantee. Next month, trustees will send their plan to the state legislature as part of their request for state funding.

Since 2007, New Hampshire has been one of more than a dozen states where average tuition rose by more than 30 percent after being adjusted for inflation.

The loss of state funding in 2011 led to a perception that the public system was not the best option for students, said Todd Leach, chancellor of the University System of New Hampshire, during an interview with the PBS NewsHour. As a result, he said, counselors began recommending options outside the public system and out-of-state.

But in 2013 the legislature restored about $15 million in funding, enabling a system-wide tuition freeze that turned those perceptions around. “We’ve seen increases in New Hampshire residents enrolling and students staying in the public system,” Leach said. “Now we want to continue that message.”

State legislatures across the country are supporting similar freezes, though mostly one year at a time. This fall, university systems in 16 states are holding tuition flat for in-state students at most or all of their campuses. That’s up from 11 states for the 2013-14 school year.

The tide of tuition freezes is no coincidence, according to Sandy Baum, a George Washington University researcher and senior fellow at the Urban Institute.

“You see a real cyclical pattern of price increases,” Baum said. “Whenever there’s a recession, states pull back on funding and tuition goes up faster. It’s not the whole explanation, but what has happened in the last few years is exactly what happened in past recessions.” 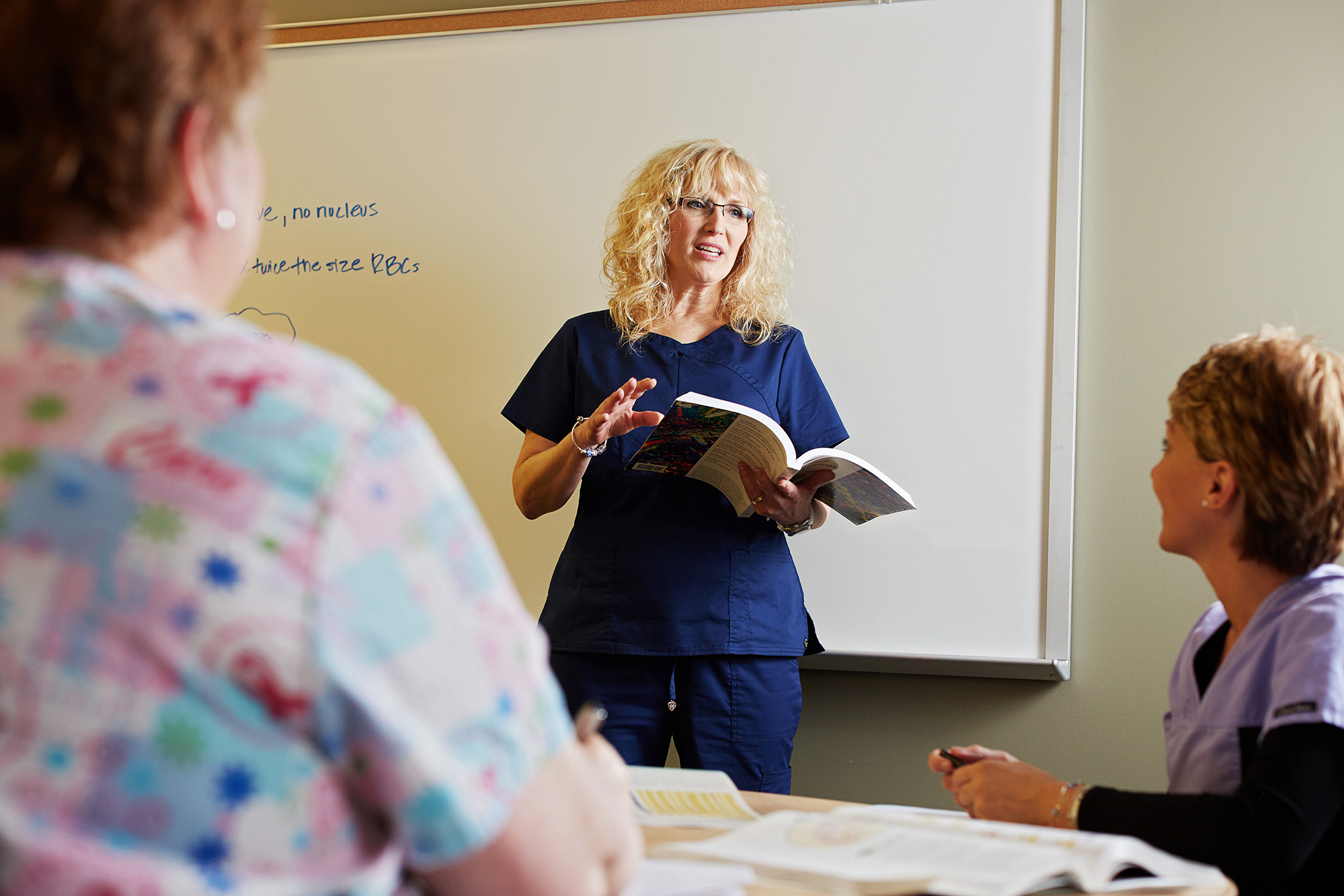 An instructor at Granite State College in Concord, N.H., talks to students in class. If trustees’ plans are approved, a current two-year tuition freeze will extend for an additional two years. Courtesy of the University System of New Hampshire.

As the recession squeezed state budgets, the Obama administration made college affordability one of its signature issues, often pointing out that while average tuition at public universities rose 300 percent in the last 30 years, the average family’s income rose just 16 percent.

Now that states are starting to turn the funding faucet back on for higher education, Baum said public pressure is helping drive efforts to clamp down on costs to students.

“People are realizing they can’t just keep raising prices,” she said. “There is outside pressure on institutions to look for other ways to solve their problems.”

At public universities in New Hampshire, they’ve looked for a range of solutions to offset money lost in the freeze. The university enforced layoffs, capped enrollment in expensive-to-run departments and discontinued some programs. A cheaper form of health insurance for staff is saving the system about $10 million a year and upgrades to campus power plants are aimed at lowering the system’s energy costs.

The drive to keep costs down in New Hampshire isn’t limited to the schools Leach oversees.

Tuition has dropped at the state’s community colleges this fall. Students will pay $200 per credit, down from $210. That will bring annual tuition for the average full-time, in-state students down to $4,800 from $5,040. Ross Gittell, chancellor of New Hampshire’s community college system, said centralizing administrative jobs across the seven campuses he runs and creating remote classes that students at every campus can take together helped make the reduction possible when the legislature increased the schools’ funding.

And while public colleges and universities often face more public resistance to increasing tuitions, even private colleges, with their higher price tags, are feeling the pressure to contain costs.

This spring, Dartmouth College leaders okayed the smallest tuition increase the university has seen since 1977.

Dartmouth College president Philip Hanlon asked department heads to find 1.5 percent of their spending to discontinue and to propose innovative projects to fund with the freed up money.

Part of what drives rising costs is that “colleges and universities need to be living at the cutting edge,” Hanlon said. “Teaching new things, teaching in new ways, doing research on new subjects, and you need facilities for that. All of that costs money. What higher education has not done well is to innovate through substitution instead of addition.”

By finding less expensive IT support, the business school freed up $566,000 to funnel back into student services. The provost’s office created a team to help faculty integrate technology into their classes by not filling other positions when employees left.

Last year, the average tuition at public universities nationwide grew by just 2.9 percent, the smallest increase in 30 years, according to a report from The College Board. Baum, one of the report’s authors, said the country could be entering a new phase of the tuition price cycle where prices continue to go up — she said they always go up — but more slowly.

“But we shouldn’t take that as having solved the problem,” she said. “If we are (entering a phase of slower growth), it would be a good time to step back and say, ‘How do we fix this so that we don’t have these sorts of crises, and students don’t face these problems where suddenly tuition goes way up or suddenly there aren’t enough places for students?’”

Left: The University of New Hampshire in Durham is one of the state's public universities and is currently under a two-year tuition freeze. Photo by Danita Delimont and Getty Images