How cursive can help students with dyslexia connect the dots

Alec Falconer knew for years that he had a problem with words and letters. The young man who is now in 9th grade struggled in school for nearly a decade before his learning difficulty was diagnosed as dyslexia. Dyslexia is a language processing disorder that can hinder reading, writing, spelling and sometimes even speaking.

“When I first found out I was dyslexic I was a little stunned,” said Falconer.

“During elementary school and middle school, I’ve never had to write in cursive. My teachers let me just write in print,” Falconer said.

But for those with dyslexia, cursive handwriting can be an integral part of becoming a more successful student.

Dyslexia at a Glance

“It’s because the various areas of the brain interacting,” said Marilyn Zecher, a former teacher and language specialist at the Atlantic Seaboard Dyslexia Education Center (ASDEC).

According to Zecher, students with dyslexia have difficulty learning to read because their brains associate sounds and letter combinations inefficiently. But cursive can help them with the decoding process because it integrates hand-eye coordination, fine motor skills and other brain and memory functions.

“Some of the most recent research in the fMRI studies is showing us that when the hands are involved, it’s a stronger association for learning and memory. When people write things they remember them longer,” she said.

Alec Falconer believes cursive instruction has helped him in school

“After going to Marilyn, my handwriting, my spelling, the way I put sentences together has definitely improved a lot,” he said.

Parent Cathy Ruse said cursive therapy is also working for her eight-year-old daughter, Lucy, who is working with therapist Deborah Spear, who has a private practice but also works with ASDEC. 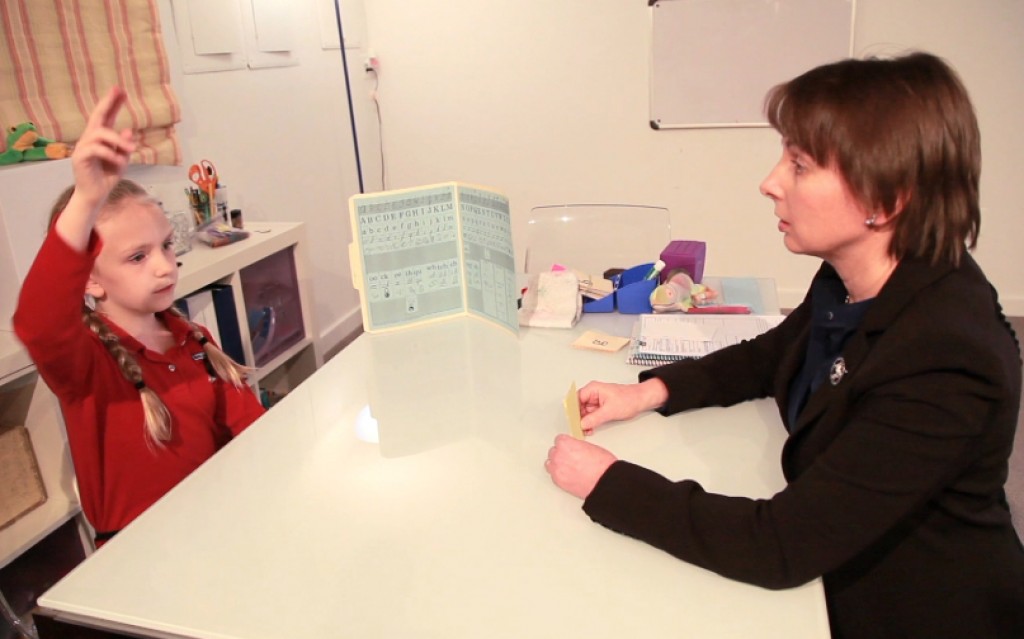 Lucy Ruse, 8, gets help for her dyslexia from therapist Deborah Spear, who uses cursive as a tool. Photo by Elizabeth Jones/PBS NewsHour

“It was so beautiful to see at the beginning of Lucy’s lessons,” recalled Ruse. “She would never be able to remember ‘d,’ but when she started sky writing ‘d’ and using all these muscles, it helped her brain remember.”

While cursive is often part of dyslexia therapy, it’s becoming somewhat of an endangered species in American public education. School districts are dropping the previously required lessons to make room for Common Core State Standards and content showing up in standardized tests.

In addition to tutoring dyslexic students, Zecher also instructs teachers on how to implement the Common Core State Standards, which do not mention cursive at all. She argues cursive handwriting supports the goals because it helps facilitate deeper and more critical thinking.

“If we’re asking children to think about what they are reading, if we are asking to really assimilate the content and make notes and remember it, cursive handwriting really supports that enormously,” Zecher said.

Some states implementing Common Core are still making an effort to keep it in the classroom, even though it’s not required. Tennessee, North Carolina, South Carolina, California, Idaho, Indiana and Massachusetts and Kansas have moved to mandate cursive be taught. Many students in the remaining states will either have to go without cursive instruction or seek private lessons outside of school.

Even though some teachers and department heads may believe cursive has no place in this increasingly digital world, Ruse said it’s worth it.

“I think that it’s awful that cursive is being dropped in so many school curricula,” said Ruse. “My daughter has learned so much from learning cursive that it would be a tragedy to lose it.”

Top Ten Resources from the National Center for Learning Disabilities:

This story and PBS NewsHour education coverage is part of American Graduate: Let’s Make it Happen, a public media initiative funded by the Corporation for Public Broadcasting.