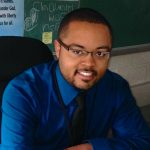 Opinion: I will not pledge allegiance until America does better

I have a bulletin board behind my desk with pictures of about two dozen African-American men and women who have lost their lives at the hands of police violence and white supremacy. They include Malcolm X, Freddie Gray, Trayvon Martin, Philando Castile, Jordan Davis, Sandra Bland, Emmett Till and so many others.

I added the phrase “With Liberty and Justice for All” running across the bottom of the board. These words are the last words found in our pledge of allegiance, and yet they never seem to ring true for black Americans. This is the exact reason why I will no longer pledge allegiance to the American flag every day or stand for our national anthem.

How can I as a black educator have this bulletin board on my wall and make social justice a theme in my classroom each and every day and then get up and pledge allegiance to a country that has made it so clear that my life does not matter?

In a country where white supremacists have been emboldened by the current administration and black people, immigrants, Hispanics, and LGTBQ students have lived in fear every day for the past year, I realized it was completely disingenuous of me to stand for a pledge when the words do not apply to my life.

When I first started doing this, I wondered how my students would react. To be quite honest, many of them have also stopped standing for the flag and had stopped doing so before I did. One particular student told me when pressed about the issue, “I’m not standing with that man being president.”

Opinion: ‘Freedom’ is why I ask my students to stand for the Pledge
By David Jungblut

My job as an educator is to give my students a voice. When they make a decision to stand up for what they believe in, I am not only in awe, but I am inspired.

I became an educator because I want my students to use what I teach them to go out and make this world a better place. And sometimes that means making the decision to stand up against what I believe is a societal wrong within my own classroom.

By changing the narrative and saying that people who stand up for what is right are disrespecting the flag, they are removing the focus from the actual issue: systemic racism that goes unchecked as institutions are allowed to disproportionately abuse and discriminate people of color.

Colin Kaepernick made it very clear from the start that his protest was about the systemic powers that have led to the marginalization and abuse of African Americans in this country.

Colin Kaepernick made it very clear from the start that his protest was about the systemic powers that have led to the marginalization and abuse of African Americans in this country.

When we say Black Lives Matter, we are not saying that white lives don’t matter. But we are acknowledging that black people are disproportionately impacted by police brutality and that we need to do something about it. We are acknowledging that systemic racism continues to rear its ugly head in many forms and these issues need to be addressed.

When people look at the decision to not stand for the flag with such a narrow-minded view, they are rejecting the very freedom that this country is supposed to represent. They also seemingly ignore the fact that this nation was built on the foundation of slave labor and by the conquering of land that was home to millions of native people. Both Native Americans and African slaves lacked rights and freedom and continue to fight for these rights today. While the explicit Jim Crow racism that denied African Americans access to equal educational, public facilities and the right to vote no longer exists, we cannot deny that racism has taken a more implicit and systemic tone today.

I believe that this country has a lot of potential, but at this time it is not living up to that potential. Yes, I teach U.S. history and civics, but also aim to teach the whole child. That means teaching them to stand up for what they believe in and fight for justice. Until America does better, I will not pledge allegiance to a country that is complicit with racism and police brutality.

Ricky House is a 7th and 8th grade social studies teacher in Arlington, Va. House graduated from the University of Pittsburgh Graduate School of Education where he served as an Urban Fellow and Masters of Arts in Teaching Candidate. While previously a teacher in Maryland, House had his students research the disparities in how the media shows black teens and white teens, completed in connection to a lesson on the Baltimore Uprising in April of 2015.