Former Incarcerated Staff Serves Up Lunch, With a Story on the Side 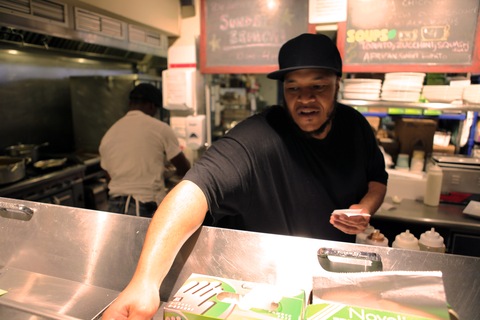 BOSTON — Traveling around the country exploring stories about America’s dropout problem and shooting for hours on end, my colleague Mike Fritz and I invariably work up an appetite. And in every town we repeatedly ask: ‘Where’s the best place to eat around here?’

One chilly Monday in November, the recommendation was Haley House Bakery Café in Boston’s Roxbury neighborhood. The eatery’s fresh food came highly praised and we were both impressed with its offerings. But most unexpectedly, a dropout story also landed on our plate.

Haley House, as it happens, is full of staff members who have been incarcerated. Their offenses include weapons violations, drug trafficking, even murder. Nearly two-thirds dropped out of school at some point. But all are now working diligently to trying to re-define their lives so the focus is no longer on what they did, but rather, about what they’re doing.

They do pretty much everything at Haley House. Garrett Gordon takes orders at the register and sometimes serves as a line cook. Nathaniel Awan handles a lot of the food prep, like grilling quesadillas and rolling up salad wraps. In the back, Alphonzo Meyers is in the middle of the baking, frosting and wrapping cookies, muffins and other treats heading to the front counter as well as out to catering clients.

“It’s job readiness, life skills,” said Daniel Cordon, 38, who runs the Transitional Employment Program, or TEP, at Haley House, which employs former inmates shortly after their release. “Just really trying to give them support in a way that is viable for them to learn new strategies and to really take a lot of the coping skills they developed to survive incarceration and to reframe those in a way that will allow them to be successful out here.” 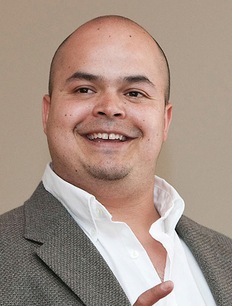 Haley House’s TEP has only somewhat recently adopted the specific mission of trying to get people through what can be a tumultuous six-month period after incarceration. Cordon, himself, was inspired to develop it after getting his own second chance at the restaurant in 2010, following a 15 year stint in prison. At that time, Haley House was still a non-profit social enterprise designed to give the disadvantaged a chance to work and earn. It just wasn’t as specific about who was hired.

Haley House reports it is nearly self-sustaining. Sales cover 90 percent of its overall budget, with the remaining ten percent coming from grants and individual donations.

Not every newly released inmate has what it takes to work at Haley House. Standards, Cordon explained, must be high for those who have lived what he calls the selfish criminal lifestyle.

“Just because you were released and given your walking papers, congratulations, but it’s not a light switch that you get to turn on,” Cordon said. “Nobody’s going to roll out the red carpet for you. Every day is a proving ground, every day you need to put forth your best effort for yourself your family and your community.”

That includes earning a GED for those who didn’t finish high school. Among those entering Haley House’s TEP, 62 percent dropped out or didn’t finish, said Cordon. The average dropout rate among state inmates is 75 percent, according to the National Dropout Prevention Center.

At the heart of Cordon’s requirements, however, is a profound commitment to change from those who want to enter the TEP.

“Having an enthusiasm and a spirit about that,” he said, “that the average person doesn’t bring. And there’s a humility to it. It doesn’t matter what you do from cleaning toilets to baking, customer service, you take pride in what you do because for so long when you’ve been stripped of status and responsibility.” 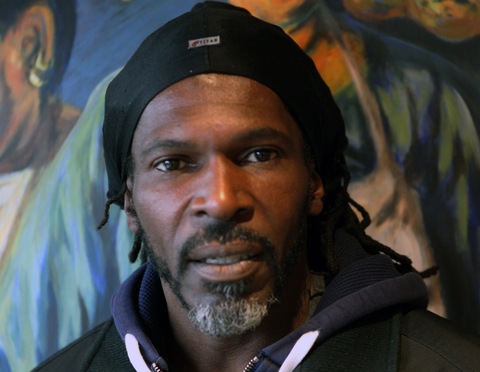 When Joe Bartley, 46, found out about Haley House after spending more than 12 years in prison, he was ready to live a different life. Bartley was among the first TEP graduates, staying on well past the ‘transitional’ period, and working his way up to wholesale supervisor. He also helps mentor the newcomers.

“I am truly blessed and highly favored,” said Bartley. He credits not just the work, but the opportunity to share with others who’ve been through similar experiences, as a key factor in his success outside prison walls.

And success for these individuals, as well as the organization as a whole, comes down to one thing, according to Cordon: justice.

“People use the word all the time ‘justice’ and I think sometimes its hollow when it’s used,” he explained. “The justice we speak of is, whether you’re a volunteer, whether you’re a permanent live-in member, or whether you work in the cafÃ©, or a patron in the cafÃ© — that you’re a part of something that takes a stand. That basically says people intrinsically deserve respect and dignity.”

“If you commit to change and put in the long hours of reflection and work and education and vocational readiness, that when you get out there are parts of our community that will accept you and work with you,” Cordon says to his employees. “Because nothing’s owed to you. You have to prove it to the world.”

Not all the people who have graduated from they Haley House TEP were able to stay out of trouble. Out of 24, two were re-arrested. But those currently working on their new lives, and especially new skills in the cafÃ©, seem to be getting on quite well.

Oh, and I recommend the special. And the chocolate chip cookies.

American Graduate is a public media initiative funded by the Corporation for Public Broadcasting to help local communities across America find solutions to the dropout crisis.