In San Francisco Bay Area, New Ideas on Innovating Out of Dropout Crisis

One of the toughest jobs in modern America has got to be running an urban school district. Superintendents of schools in big cities like Washington, D.C, Los Angeles and Oakland, Calif., don’t have very good job security because if they are taking any risks, and messing with the status quo, it provokes controversy and opposition.

Take Tony Smith, 44, the new boss of the Oakland Unified School District. As a former offensive lineman for the University of California Golden Bears football team, he is tough. As he needs to be, dealing with schools where the dropout rate hovers around 40 percent — and only 53 percent of the students graduate.

His plans for Oakland’s schools are ambitious. So much so that a campaign has been launched by parents to recall five school board members who are supporting Smith’s proposals.

What Smith wants to do is change the nature of the school district so it works more seamlessly with various social agencies in the area like the health department and the housing authority. “What we’re looking at,” he says, “is a failure of the system, the set of relationships among the different institutions that have produced the outcomes we’ve got. So we can’t just transform a single institution and expect to change all the outcomes.”

Step one, and the proposal that has invoked immediate opposition, is to close five elementary schools as a cost-cutting measure. Then there would be some money to implement other changes. There are too many schools, he argues, for a district where enrollment is shrinking. In the past two years, enrollment has dropped 6,000 students and currently stands at 38,000. About 45 percent of school-age children in Oakland attend private school or go outside the district.

But Smith faces other problems, as well: motivating children from poor neighborhoods; getting them interested in science, math, technology and engineering — fields where there are employment opportunities in the tech-savvy San Francisco Bay Area; and raising enough money to pay for changes he wants to make.

For a report airing on Thursday’s NewsHour broadcast as part of our the American Graduate series, I spoke with Superintendent Smith (see the extended interview above) about dropouts and the unfulfilled need for technically trained students. We profiled a program called Techbridge that tries to interest girls in science, engineering, technology and math. 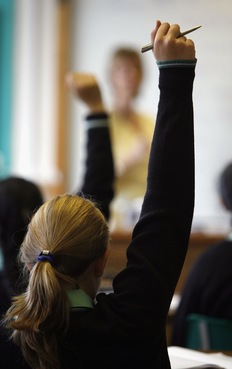 It’s not a simple problem. Besides the effects of poverty, some education analysts believe that achievement can also be tied to expectations for race or gender. For example, American girls often face a stereotype of not being expected to do well in what’s called STEM: science, technology, engineering and math, because in this country that’s not been their role, said Claude Steele, dean of the School of Education at Stanford. And that prejudice can be self-fulfilling. Some girls don’t try to get involved in science and math and can become easily discouraged. And their teachers might not anticipate them doing well.

Steele, author of “Whistling Vivaldi and Other Clues to How Stereotypes Affect Us,” sat down with me to talk about prospects for programs like Techbridge, which enrolls 600 girls in Oakland and nearby cities in two hours of after-school science classes a week. Many of the girls are not high achievers, many are black or Latina, girls some people wouldn’t expect to see giving up their 3 to 5 p.m. slot so they could design catapults or connect electrical circuits. But they’re doing it and the results have been good. They are more aware of job opportunities for women in technology; they see themselves as having a role, and their interest has been piqued.

In the video below, Steele also shares his concerns about the real-world implications for gender stereotypes — including its role in the dropout rate — and some of the other proactive solutions schools and companies can take to counterbalance them.