After months of publicity, with the battle lines drawn, the trial on Harvard’s admissions policies is set to end Friday, and it could be the beginning of the end of affirmative action as we know it. But the logic put forward by Edward Blum, the instigator of the suit, is faulty.

Blum has successfully convinced a group of Asian Americans that affirmative action is the key reason that they seem to need higher SATs and GPAs than others to get into Harvard. Now, these students are suing Harvard over race-conscious admissions policies.

In suggesting that the admit rate for Asian Americans applying to Harvard would increase with the end of affirmative action, Blum is selling a narrative to Asian Americans that is shockingly similar to the one sold by President Trump to white Americans feeling the pinch of their (perceived) declining status.

Yes, if Asian American teens and their parents feel it is harder and harder to get into the likes of Harvard and Yale, they are right. Admissions rates have declined for all young Americans applying to the most selective colleges. Even legacy applicants to Harvard are more likely to be rejected than admitted. And yet, at the nation’s top colleges, Asian Americans are still represented by 6 percent above their share of the population; white students are 13 percent overrepresented; and black students are 8 percent less represented. 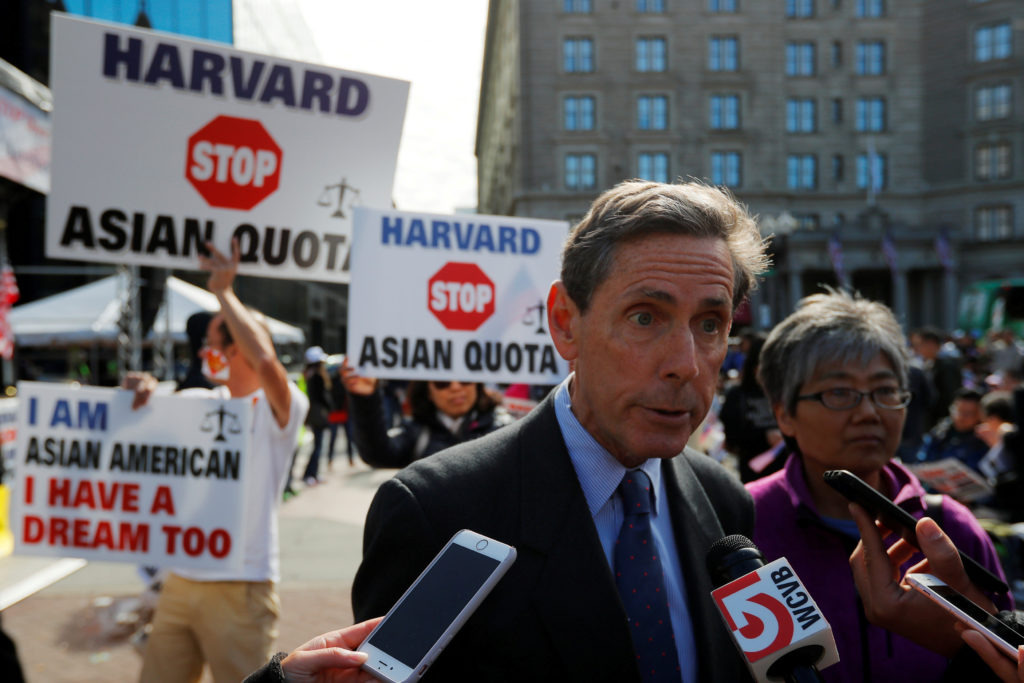 Anti-affirmative action activist Edward Blum, founder of Students for Fair Admissions (SFFA), speaks to reporters at a rally in Boston on Oct. 14, 2018. Photo by REUTERS/Brian Snyder

One in three Asian Americans start at a “very selective” college, compared to one in four whites and one in nine blacks. Similarly, declining household incomes are making middle class and working class whites feel the pinch of our nation’s growing inequality, even while overall whites hold more wealth than any other group in the U.S., including Asian Americans.

Social science has shown us that when a group perceives a decline in status, economic or otherwise, they are likely to accept narratives that blame a different group — often a stigmatized one — for that decline.

Admissions rates have declined for all young Americans applying to the most selective colleges.

For whites, this has meant vulnerability to the president’s attacks on immigrants and Muslims.

For Asian Americans, this has meant that affirmative action for black, Latino, and Native American applicants can easily become the enemy.

But neither of these narratives is based in fact. Immigrants in the United States commit fewer crimes than U.S. citizens. And if affirmative action were to end tomorrow, whites would be the group to benefit most, not Asian Americans. 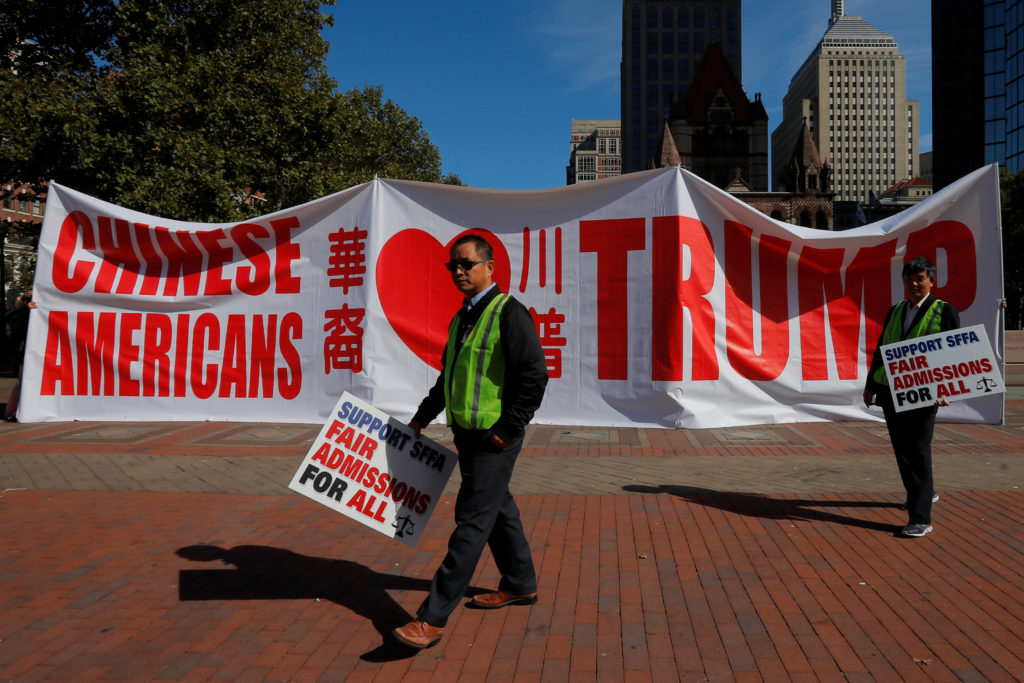 Supporters rally ahead of the start of the trial in a lawsuit accusing Harvard University of discriminating against Asian-American applicants, in Boston on Oct. 14, 2018. Photo by REUTERS/Brian Snyder

The false logics being put forward in the Harvard case, and by President Trump, are as dangerous as they are wrong. They lead to some whites and Asian Americans pointing fingers at groups already marginalized in American society — immigrants, African Americans, Latinos, and Muslims — rather than understanding the true roots of their declining fortunes.

For white Americans, globalization, tax breaks for the 1 percent, and the decline of unions are just some of the root causes of falling wages among the middle class. For Asian Americans, increases in population — without similar increases in student body size on college campuses — and growing numbers of international applicants both create more competition for admission to the nation’s top colleges. And other admissions criteria, like considerations of home state, parents’ occupation, and intended major, actually privilege white over Asian American applicants.

The fact is, only a fraction of the numerous, immensely talented and accomplished young Americans can go to Harvard and its peer institutions. There just is not enough space.

The fact is, only a fraction of the numerous, immensely talented and accomplished young Americans can go to Harvard and its peer institutions.

But ending affirmative action would harm black, Latino, and Native Americans most. These groups would be less represented on elite campuses, and consequently less represented in our nation’s leadership. Colleges would be forced to ignore the generations of privilege that advantage white applicants, as well as the ongoing impact of implicit racial biases and more. It would also harm all students on selective college campuses, because classes on those campuses will lack a quorum of voices from our country’s most disadvantaged groups.

We need to set the record straight. By looking closely, most Asian Americans will be able to see through the false narratives and reject Blum’s campaign to use us to end affirmative action. And most white Americans will be able to see through the president’s false promises about increasing prosperity and status by denigrating immigrants and Muslims in the United States and beyond. Otherwise, we’ll never be more than pawns to help the powerful prey on the most disadvantaged — while seeking to retain their position at the top.

Above: Supporters attend a rally ahead of the start of the trial in a lawsuit accusing Harvard University of discriminating against Asian-American applicants in Boston on Oct. 14, 2018. Photo by REUTERS/Brian Snyder

Natasha Warikoo is associate professor at Harvard Graduate School of Education and author of The Diversity Bargain: And Other Dilemmas of Race, Admissions, and Meritocracy at Elite Universities.