How a student with autism taught me to kayak

Daniel Hernandez is a 10th grader with striking eyes and a ready smile who is prone to answer questions with a polite “Yes, ma’am.” This young man, who is 16, used to be described as “shy,” but he knows a lot about kayaking: how to set up the seats, put the oars together and how to get in without flipping it over. He knows how to steer the small vessel right, left, and how to stop.

I, however, have never been kayaking. I’m a novice when it comes to most water sports and probably wouldn’t inspire great confidence in any teacher. But Daniel had confidence. He was proud to share what he knew. Excited really. And he wasn’t alone. Daniel was among several of his classmates from American Senior High School in Miami who volunteered to teach me how to kayak.

All of them are students with autism. 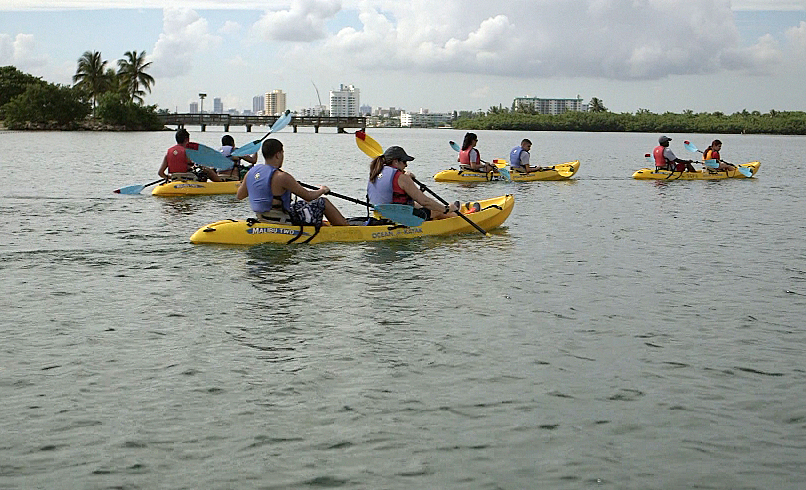 “It’s, like, peace and quiet,” said Daniel. “It makes you feel the wind inside, in your heart here,” he explains with his hand on his chest.

While Daniel helped me get my bearings on the sandy banks of Oleta River State Park on Biscayne Bay, his classmate Demitrius Sesler, 19, was helping one of the less experienced kayakers put the oars together properly. Demetrius, his teachers told me, has become much more confident and more of a leader since these lessons began.

And he isn’t afraid to talk about it with a perfect stranger.

“The real bosses are my teachers, so I was their helper,” he said. “They wanted me and they needed me.”

“How does that make you feel?” I asked.

It is not at all unusual to see students with disabilities like Daniel and Demitrius, out of the confines of the classroom and learning to kayak, sail or golf in Miami. Jayne Greenberg, the Miami-Dade County Public Schools’ Director of Physical Education and Health Literacy, has found many community partners and sought grant funding to help develop a Physical Education program that offers activities all students want to learn, and activities they can do for a lifetime.

“We work with the Coconut Grove Sailing Club, Oleta River State Park, Miami Yacht Club, they don’t charge us for their services,” said Greenberg. “We work with ice-skating rinks to do sled hockey … the Miami Heat works with us with their Heat Wheels, there is no charge for services.”

Greenberg, who also serves on the President’s Council for Fitness, Sports and Nutrition, and some of her teachers traveled to Washington, D.C., in October to share best practices at a White House Summit and Research Forum on improving health and fitness for Americans with Disabilities.

The South Florida contingent can speak authoritatively on the importance of inclusion, the challenges of helping children with disabilities get moving and how to create a popular and community-supported physical education program that is so popular, there isn’t room right now for all the students who want to participate. And they know why it’s so important.

As kids become ever more sedentary and the rates for childhood obesity inch ever higher, the obesity rate for children with disabilities is 38-percent greater than that of their peers. Inaccessible facilities and equipment are often cited as barriers, but an American Academy of Pediatrics Council on Children with Disabilities report from 2008 found that parents and doctors “overestimating the risks or overlooking the benefits of physical activity in children with disabilities” can also be an issue.

That can be true of educators too. It isn’t necessarily easy to teach a group of teenagers with autism a sport of activity, let alone take them a field trips where they are kayaking or sailing in open water by themselves.

“There’s a lot of self-confidence and pride that the students learn because we always teach them what they can’t do: ‘don’t do this or you’re going to get hurt; don’t do this, I’m afraid to let you try it,’” Greenberg said. “We tell the kids, ‘we want you to do this,’ and for the first time they do activities and they feel so good about themselves.”

And teachers, including Annie Perez, the P.E. instructor at American Senior High School, have become quite experienced at helping students with disabilities including autism, learn to kayak and sail safely in Biscayne Bay.

“Rules and discipline, like you would do with a four-year old,” she said. “I’m very strict and hard, and I have fun with them. And I have to be that way … it’s serious. You are out in the ocean and anything can happen.”

There is significantly less danger at the International Links Golf Course, where students from South Miami Senior High practice chipping and putting with the help of the professionals who work there.

Some students, including Marilyn Carrera, are in wheelchairs, some need help putting the ball on the tee (but honestly, who doesn’t sometimes). And despite the nearly constant noise of planes taking off and landing at the very busy Miami International Airport nearby, these kids are focused. And having a great time.

“It’s holistic,” said Alina Marler, a teacher at South Miami Senior High. “It teaches them how to be a person.”

“You could do it in school — I have a golf game in my classroom — but it’s not the same as being out in a golf course where actual golfers play the game,” Marler said. “To them, this is a big deal. It makes them feel whole. It makes them feel like they can do something that students without disabilities can do.”

KEY FACTS ABOUT AMERICANS WITH DISABILITIES

It’s important to point out that the out-of-school activities like kayaking, sailing and golf — often done with the help of community partners — are available to all students, not just those with disabilities and not just those in high school.

But if you’d asked me a few weeks ago if i thought I’d go on my first kayaking trip in wide-open water with a young man with autism, I probably wouldn’t have believed you. But Daniel was clearly up to the task. And he taught me much more than just lessons in kayaking.