Some colleges are totally unaffordable, and this tool proves it

By most measures, Aboubacar Konate was an outstanding candidate for an elite college.

Konate graduated second in his class from The English High School in Boston with a 4.5 grade-point average. He was on the student council and debate team, took Advanced Placement classes in history and chemistry, speaks four languages, worked a corporate internship and played three sports: soccer, basketball and track.

He did everything he thought was needed to become the first in his family to go to college. “I went through all the hoops, the struggles, the obstacles,” Konate said. “College was my dream and my goal.”

But the aspiring engineer fell short on one other measure: having the money to pay for the school he wanted.

“We’ve become numb to the problem of college costs. But this can be a bit of a wakeup call for people.”

While Konate won a substantial scholarship from a foundation run by one-time Boston Red Sox player Adrian González and his wife, he still couldn’t afford the private universities he’d dreamed of attending.

The best deal he could get was from a private engineering college that offered Konate little to no financial aid, despite his academic record and economic situation; he would still owe more than $30,000 a year, even after subtracting his González scholarship.

“My family does not have money like that,” Konate said.

Instead, he enrolled in a less expensive public university.

An increasing number of American families are finding themselves in the same situation, according to federal data analyzed by The Hechinger Report in collaboration with the Education Writers Association, or EWA, and available for students and their families who are considering college through our updated Tuition Tracker. The website discloses the net price based on a user’s family income, and other essential information, by institution. 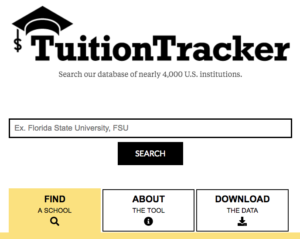 Find out how much students in different income brackets pay at any U.S. college or university using the Tuition Tracker tool.

For some families, after years of escalating college costs and stagnant earnings, the higher educations they desire for their children are conclusively, decisively and categorically out of reach.

The actual costs, after grants and discounts, charged by some private colleges and universities are now significantly higher than some families’ entire annual incomes, our analysis shows.

Meanwhile, the overall cost of net tuition, fees, room and board rose 69 percent at public universities between 1997-98 and last year, even after being adjusted for inflation, according to the College Board. That’s a period during which the Census Bureau reports that median household earnings fell.

“The price inches up each year while family incomes for the vast majority of Americans stagnate,” said Mark Huelsman, who studies education trends as a senior analyst at the left-leaning policy organization Dēmos.

This is not a secret to families with college-aged kids. Sixty-nine percent say they had eliminated a college from consideration because of the price, according to a survey by the student loan provider Sallie Mae.

A record 15 percent of first-year students told another national survey, by an institute at UCLA, that they had to forgo enrolling at their top choice of college because of the cost. That’s up 60 percent since 2004.

“We’ve become numb to the problem of college costs. But this can be a bit of a wakeup call for people,” said Julie Margetta Morgan, a fellow at the liberal think tank the Roosevelt Institute, which focuses on economic policy.

There is some good news in the numbers. The average net price has stayed fairly flat for a decade now for families earning between $30,000 and $48,000 at both public and private institutions. It’s even dropped slightly at private colleges and universities for families that make $48,000 or more, as those schools dole out more financial aid to fill seats in the sixth year of an enrollment decline.

But for families at the bottom of the income scale, earning $30,000 or less, the cost of college continues its relentless rise. The average net price for the 2015-16 school year — after discounts and financial aid — reached nearly $20,000 a year at private, and some public, universities and colleges.

And those are just the averages for the most recent year for which data is available. Some private colleges charged a net price of as much as nearly $42,400 a year for families with annual incomes of $30,000 or less.

“It is completely infeasible to think that families can dedicate even half to three quarters of their income to put their kid through college,” never mind their entire incomes or more, said Debbie Cochrane, vice president of The Institute for College Access and Success, which tracks the debt to which many students turn to fill the gap.

“It is completely infeasible to think that families can dedicate even half to three quarters of their income to put their kid through college.”

The highest-income families pay, on average, 15 percent of their earnings for college, according to earlier research by the Institute for Higher Education Policy, or IHEP, while low- and moderate-income families are expected to finance an amount equivalent to 100 percent of what they make in a year. By that calculation, half of 2,000 institutions analyzed by IHEP were affordable only to the wealthiest students — those with annual family incomes of $160,000 or more — and one-third only to students from families that made at least $100,000 a year.

A separate Dēmos study found that, even at public universities, students from families earning $30,000 and less in 22 states face net prices of more than $10,000 a year. The net price of college is the equivalent of a third of black families’ median annual income — and, in 26 states, more than half — and a quarter of Hispanic families’, compared to about a fifth of what white families earn. (The study was supported by the Lumina Foundation, which is also a funder of The Hechinger Report.)

“How affordable a college is doesn’t mean it’s the right choice for a student,” said Brendan Williams, director of knowledge at the nonprofit UAspire, which helps low-income and first-generation students navigate the route to college. “The cheapest option is not always the best option.”

In addition to diverting many lower-income undergraduates to poorly resourced schools, the price also forces more of them to balance work with college than their higher-income classmates, which a new study by the Center on Education and the Workforce at Georgetown University finds significantly lowers their grades and prolongs the time it takes them to finish; only 22 percent of low-income students who work graduate within even six years.

The maximum a first-year student can borrow with a federally subsidized loan is $5,500. That’s usually nowhere near enough to cover what many low-income students are left to pay for college, forcing them to resort to parent and private loans.

“We haven’t come up with quantitative cutoff about how much a student should borrow, because each individual student has to balance their own situation,” said Mamie Voight, vice president of policy research at IHEP. “They need to do that calculus themselves, about what they can reasonably expect to earn with a degree.”

“The cheapest option is not always the best option.”

Konate, who turned to UAspire for help, ended up at the public University of New Hampshire, which offered him more generous financial aid — though he was responsible for costs besides tuition, worked while in school, and still ended up with $60,000 worth of federal and private loan debt by the time he graduated last year.

Now a structural engineer, he mentors younger students in the same straits. “They have their hearts set on a school, but they just can’t afford it,” he said. “It worked out for me in the end, but for a lot of other students, it doesn’t, and they leave. Your dream of college fades away.”

“It’s frustrating,” said Myiesha Robateau, the first in her family to attend a four-year university. Robateau, who followed in Konate’s footsteps, graduating in the spring from Boston English, also wasn’t offered enough financial aid to go to her first choice of college. Instead, she began this fall on the flagship campus of the University of Massachusetts system at Amherst. 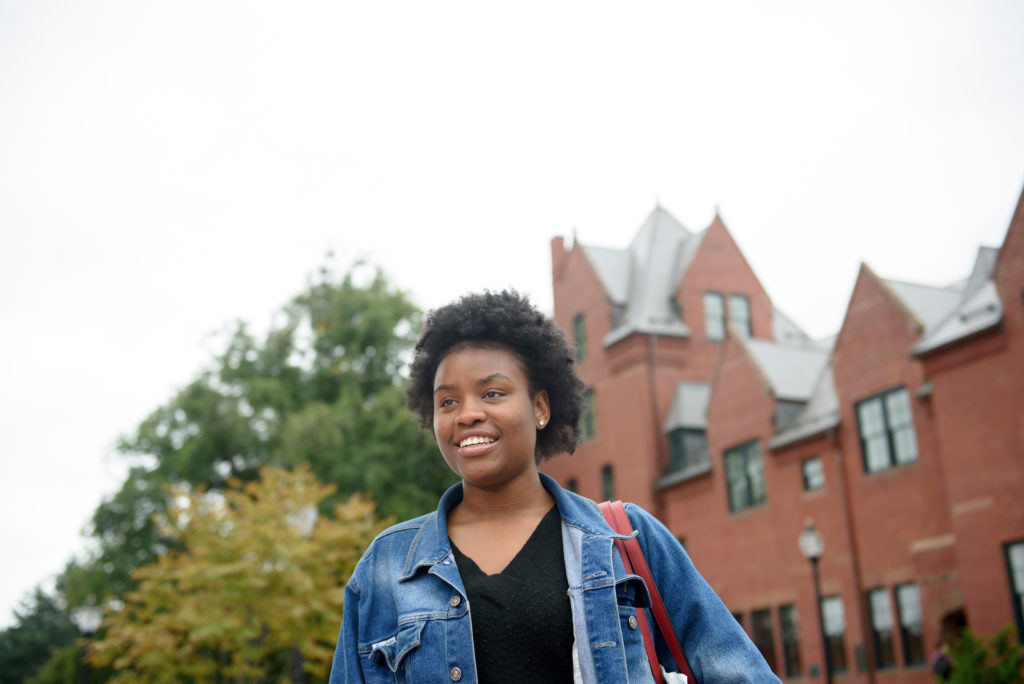 Myiesha Robateau at the University of Massachusetts, Amherst. Photo: Kate Flock for The Hechinger Report

There are some caveats to the data. They cover only up until the 2015-16 academic year, and do not include students who do not receive federal financial aid, because the government can’t track them. They also don’t take into account regional variations in the cost of living.

But the numbers show that many are shut out of the educational experiences to which they aspire. “There is that whole idea where if you work really hard and get good grades and do all that stuff you’re going to be able to go to college and it will be affordable,” said Williams. “And that isn’t true any more.”

This story about college costs was based on data from Tuition Tracker, a tool produced by The Hechinger Report and Education Writers Association for students and their families. The Dallas Morning News contributed. The Hechinger Report is a nonprofit, independent news organization focused on inequality and innovation in education. Sign up here to receive the higher-education newsletter.

Left: Aboubacar Konate graduated second in his class from high school, took Advanced Placement classes, speaks four languages and played three sports. “College was my dream and my goal,” he says. But private colleges offered the aspiring engineer little financial aid, so he went to a public university and now works as an engineer in Boston. Photo: Kate Flock for The Hechinger Report

Why student debt is ‘a crisis’ for some borrowers