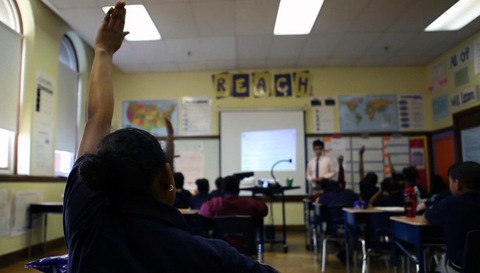 Why is it so hard to determine what makes a good teacher? The answer is both complicated and polarizing. In recent education reform history, judging teacher evaluations has become as much an issue as how to evaluate student achievement.

The NewsHour’s American Graduate team recently traveled to Bridgeport, Conn., to document how one charter school’s system of constant instructor feedback is incentivizing good performance and encouraging teachers to stay in the classroom.

In contrast to charter schools, public school administrators are often in conflict with teacher unions over how to evaluate their professionals. At times, as in the recent case of the Chicago Teachers Union strike, negotiations have become so disruptive that thousands of students are left out of the classroom as the grownups try to reach a deal.

President Barack Obama signs into law the American Recovery and Reinvestment Act, which, among other things, sets aside roughly $4.35 billion for states to improve their education systems.

The competition, known as Race to the Top, distributes funding to states that meet specific requirements and set up concrete plans to improve their schools. One key area of reform, as laid out by the law, is teacher evaluations. As such, the contest sparked a whole host of reforms, many of which have lead to a number of conflicts between unions and government officials.

Observations conducted by “master educators,” and teachers’ commitment to professional development, also contribute to their final score. “Highly effective” teachers are eligible for bonuses, while “ineffective” teachers face dismissal. Critics of the program, particularly teachers’ unions, charge that it removes experienced teachers, but many states — motivated by President Obama’s Race to the Top program — have studied IMPACT while overhauling their own teacher evaluation systems.

The following month, Rigoberto Ruelas, who had taught fifth grade for 14 years, commits suicide. His family blames the publication of his “average” and “less effective” ratings for raising students’ standardized test scores, and United Teachers Los Angeles urges the newspaper to remove the database from their website.

New York Post publishes the name and salary of New York City’s “worst teacher” with a link to a database of value-added scores for teachers across the city.

After months of heated negotiations with Chicago Mayor Rahm Emanuel, the city’s teachers union and its 26,000 members vote to go on strike, preventing more than 350,000 children fro going to school. While wage cuts played a large role in the decision to walk out, much of the teachers’ discontent stems from newly imposed and significantly tightened teacher evaluation requirements.

The city’s new REACH (Recognizing Educators Advancing Chicago’s Students) initiative dictates that student growth, often based on test scores, will account for 40-percent of a teacher’s evaluation score, which is 10 to 15 percent higher than the state’s requirement. Chicago Teachers Union President Karen Lewis estimated that the new requirements could result in the firing of 6,000 teachers, though that number has been disputed. After seven days, the union reached an agreement and called off the strike, but broader education reform issues remain.

A three-year Bill and Melinda Gates Foundation study of 3,000 teachers in seven school districts, known as the Measures of Effective Teaching (MET) project, concludes that value-added scores were an accurate assessment of teachers’ impact on student performance.

But, noting that these assessments were even more accurate when combined with other performance measures, the study recommends that value-added scores only represent one-third to one-half of a teacher’s evaluation.

The teachers union in Florida brings a case before a circuit court in Tallahassee contesting the constitutionality of the state’s new education reform legislation.

The union argues that the new law, which takes effect in the 2013-2014 school year, unilaterally imposes new salary restrictions and violates its right to collective bargaining.

Teachers are also upset over the new merit-pay system, which would compensate teachers based on how well their students perform on tests. Under the new law, teachers are graded based on math and reading results from the Florida Comprehensive Assessment Test. But for those who teach other subjects, evaluations are based largely on the performance of other teachers.

A Florida judge strikes down the new merit-pay provision, calling it “wholly invalid.”

New York City misses its state-imposed deadline to reach an agreement on new teacher evaluation policies, jeopardizing the prospects of receiving $450 million in state and federal funding. Despite having had more than two years to approve the new measure, the teachers union and city government were unable to reach a compromise over changes to the city’s evaluation methods. As was the case in Chicago, the union expressed concerns over making student test scores account for 40-percent of teacher evaluation grades, an increase of 20-percent.

The union also wants the agreement to include a sunset clause that would require a re-vote of the evaluation process in 2015. But because the dismissal process takes two years, including such a clause could mean that the city has almost no way of removing teachers.

The original legislation, passed in 2010, called for 20-percent of an evaluation to be based on test scores, while also shifting the rating system away from a binary structure.

United Teachers Los Angeles approves the use of students’ standardized test scores in their evaluations. However, the agreement with Los Angeles Unified restricts the value-added model, known as Academic Growth Over Time, which had been coupled with intensified observations and student and parent feedback in performance reviews.

Under the agreement, teacher evaluations can be based, in part, on raw state test scores, school-wide value-added scores, and high school exit exams, as well as suspension, attendance, graduation and course completion rates. The deal was heralded as a victory for the teachers union.

American Graduate is a public media initiative funded by the Corporation for Public Broadcasting to help local communities across America find solutions to the dropout crisis.