Think finals are tough? Real challenge for growing number of college students is getting enough to eat

Every morning, as Christine Janumala prepares for her classes at Columbia University, she makes sure her bag is packed with all the essentials. Textbooks. Note pads. Pens. And at least one empty tub of Tupperware.

While the school supplies will help her get through her coursework, it’s the Tupperware that will get her through her day. After paying for tuition and other living expenses, Janumala often has no money left for food. She darts to club meetings between lectures to scoop up uneaten pizza or sandwiches. If she gets there early, she can grab enough to stow away for later. 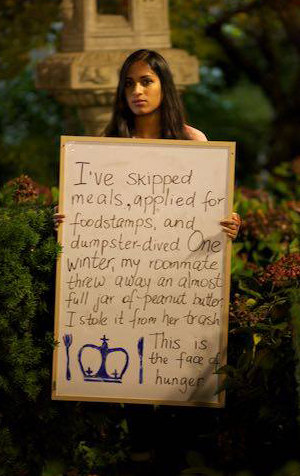 “Being food insecure is so alienating to begin with, but there’s an extra layer of ‘I don’t belong’ when you go to such a prestigious university, where food is usually an afterthought for most people,” said Janumala, a 21-year-old junior from Santa Ana, California majoring in creative writing and the daughter of immigrants from India who is the first in her family to go to college in the United States. “Making sure I get three square meals a day requires a lot of planning.”

It may come as a surprise that an affluent school like Columbia, which has a $9.2 billion endowment and just raised another $1 billion for financial aid, has students who can’t afford to eat. But as more low-income students seek a higher education even as the cost of tuition soars, hunger is a problem that is seeping onto even the wealthiest and most elite campuses.

Related: Nonprofits step in to help students that colleges allow to ‘slip through the cracks’

A few community colleges have tackled the issue of hunger head on, but other higher-education institutions have left it up to student groups to take the lead in creating meal-share programs or food banks, or even shine a light on the problem. One exception is the University of California system, which allocated $750,000 earlier this year to answer the surreal question of how many of its students didn’t have enough food, and recommend what to do about it.

More than 200 food pantries have popped up on college campuses—50 of them this year alone.

At Columbia, for example, students who don’t use up all the weekly credit from their dining hall accounts can give some of it to classmates who don’t have enough to eat; some undergraduates have created an app that also pinpoints where on campus there is free food. A student at Otterbein University in Ohio started a program to send food home on the weekends with financially struggling students who have children; it serves 85 families a week.

Advocates say these remedies, however well-intentioned, don’t get at the root of the issue.

Related: States moving college scholarship money away from the poor, to the wealthy and middle class

Over the last decade, the number of students receiving federal Pell grants, which are given to the neediest of undergraduates, has grown from 5.3 million to 8.2 million. But the increase in the cost of attendance has eclipsed what these grants cover, including for such necessities as food. Meanwhile, median family income has flattened out or fallen not just for the poor, but for all but the wealthiest Americans.

This has left the lowest-income students, in particular, with crushing loans and tough choices.

“Historically, colleges and universities were for the middle and upper classes, and financial aid was developed to help those families go to college,” said Clare Cady, co-founder and co-director of the two-year-old College and University Food Bank Alliance. More poor people may be going to college now, she said, “but the college system in this country hasn’t caught up. Colleges and universities are systemically out of step with the needs of a large and growing segment of the students on their campuses.”

Related: The financial aid policy that shuts out millions of students

A little less than half of Janumala’s tuition is paid for by a Pell grant and other financial aid, which means she’s covering the rest plus all of her living expenses in New York City. As a student in the School of General Studies — a Columbia program that caters to nontraditional undergraduates who often don’t live in the dorms — she said she has many classmates who, like her, are struggling to get by. To make ends meet, they Dumpster-dive and beg the local supermarkets for day-old food that would otherwise be thrown out.

One in three college freshmen has only inconsistent access to adequate food, according to a study by researchers at Arizona State University and the University of Minnesota released last month at the annual meeting of the American Public Health Association.

There has also been other research about this at individual institutions. One out of five students at the University of Hawaii at Manoa struggled with hunger, a 2009 study found. A survey by the City University of New York in 2011 said that roughly two in five undergraduates, or 100,000 students there, had trouble getting enough food.

And “we suspect that these are undercounts,” said Sara Goldrick-Rab, professor of educational policy studies and sociology at the University of Wisconsin. “College is making students poor. They are trading off food to cover their tuition.”

A new report produced by Goldrick-Rab at the Wisconsin HOPE Lab, which works to lower barriers to graduation, found that more than one in five students at 10 community colleges studied have trouble getting enough to eat. About a quarter frequently skip meals because they can’t afford food.

Yet as policymakers and the broader education community look for ways to help first-generation, low-income students get into and through college, little if any of that discussion has been focused on hunger.

“It’s beyond dispute that in preschool and through high school, nutrition is important for learning,” said Wick Sloane, a professor of writing at Bunker Hill Community College, who said some of the advising he does with students is about how they can register for food stamps, and who wants other community colleges to do more for their students who are going hungry. “So we give those students free and reduced-priced meals. Then, after 12th grade, the whole thing falls off a cliff.”

Fourteen percent of households nationwide are grappling with a lack of nutritious food, the U.S. Department of Agriculture estimates. The Wisconsin report suggests that hunger may contribute to the fact that only a little more than half of students graduate with degrees in even six years—a rate that is actually falling.

It’s not just being hungry that’s a problem; students who have to work to make ends meet, or worry constantly about where their next meals may be coming from, have more pressing needs than making sure they get to class or finish their assignments on time.

“The idea that meal shares or individual food banks are going to solve this is embarrassing,” Sloane said.

“I applaud the food banks because they’re not sitting around wringing their hands and doing nothing,” he said. “But a monthly delivery of food is not going to help millions of hungry students.”