To help put the student unrest in perspective, we analyzed federal data on faculty diversity among Southeastern Conference universities. And the students are right. It’s not great. 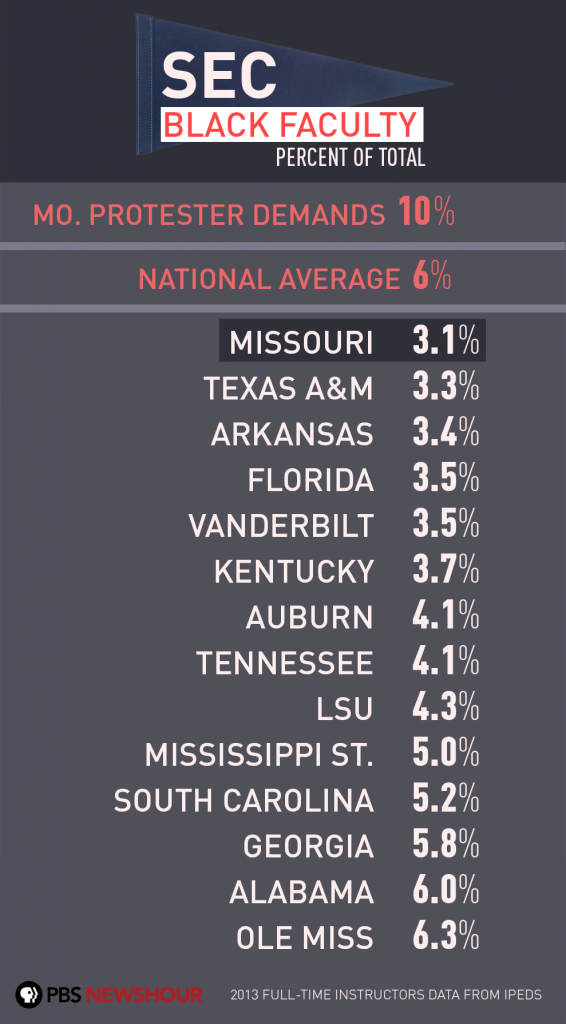 At Mizzou, African-Americans made up 3 percent of full-time instructors in fall 2013, according the latest available federal data from the National Center for Educational Statistics. That falls far short of student demands: an increase to 10-percent in black faculty and staff by the 2017-2018 academic year.

Nationwide, blacks made up 6 percent of full-time instructional faculty, according to NCES. Nationwide African-Americans made up 13.2 percent of the U.S. population and 11.8 percent of Missouri’s population in 2014.

But Mizzou’s figures are especially low. The university ranks the lowest among all 14 Southeastern Conference universities, according to federal data. The University of Mississippi has the highest percentage of African-American faculty members, at 6 percent.

All colleges and universities that receive federal financial aid must complete surveys for the National Center for Educational Statistics, which operates within the research arm of the Department of Education.

Researchers then populate those survey results into the Integrated Postsecondary Education Data System, a sprawling database that contains statistics on faculty demographics, student enrollment, graduation and retention of more than 7,000 institutions.