A quiet rise in unvaccinated children could put the U.S. at risk of outbreaks

Vaccine exemption rates among infants and school-aged children have been quietly rising, creating volatile pockets of unimmunized individuals, new data from the Centers for Disease Control and Prevention shows.

For the third consecutive school year, unvaccinated communities have seen small but notable growth, according to the CDC’s latest National Immunization Survey. One school in Oregon has toddler vaccination rates lower than those in Venezuela. Only half of the preschoolers in the state received their MMR vaccines, compared to 57 percent of Venezuelan toddlers.

One school in Oregon has toddler vaccination rates lower than those in Venezuela.

Overall, the CDC reported child vaccination rates have been steadily increasing since 2001. The agency’s survey encompasses millions of children across 49 states* and the District of Columbia by pulling data from health care providers and schools. Their findings show that vaccine coverage remains high for 19- to 35-month-olds and kindergarteners.

Eighteen states allow for non-medical exemptions for school children, allowing parents to chose not to vaccinate their child for philosophical reasons. Within these states, a handful of counties have unusually high percentages of unvaccinated children, creating pockets of vulnerability.

These unimmunized pockets represent a threat for disease outbreaks, both here and abroad. Here’s what we know about where and why they exist, and what can be done to mitigate their risks.

Why do vaccination rates vary substantially between states?

Children are normally required to enter schools fully vaccinated. Toddlers missing vaccinations must be caught up by the time they reach school age, causing immunization rates to increase as kids get older, said Kathy Kudish, the immunization program manager for the Connecticut Department of Health. For example, in 2015, more than 90 percent of 19- to 35-month-olds nationwide received individual vaccines for DTaP (diphtheria, tetanus, and pertussis) and MMR (measles, mumps and rubella), but this number jumped up to 94 percent for kindergarteners.

Connecticut has some of the highest child vaccination rates in the country. Rates for polio, DTaP, MMR, hepatitis B, varicella and hepatitis A vaccines among kindergarteners in the state are all above 96 percent. Kudish attributed the state’s high rates to a healthcare provider community that is highly supportive of vaccination.

“The state in turn works with healthcare providers to support pro-vaccination methods to parents,” Kudish said.

Connecticut allows some medical and religious exemptions, but other states are more lenient towards parents who delay or skip vaccinations.

According to an analysis led by the Baylor College of Medicine, 12 out of the 18 states that permit philosophical exemptions have seen increases in kindergarteners with non-medical exemptions since 2009. These totals don’t include homeschooled children, who aren’t typically required to provide vaccination data. (In the U.S., 47 states and the District of Columbia also allow religious exemptions). 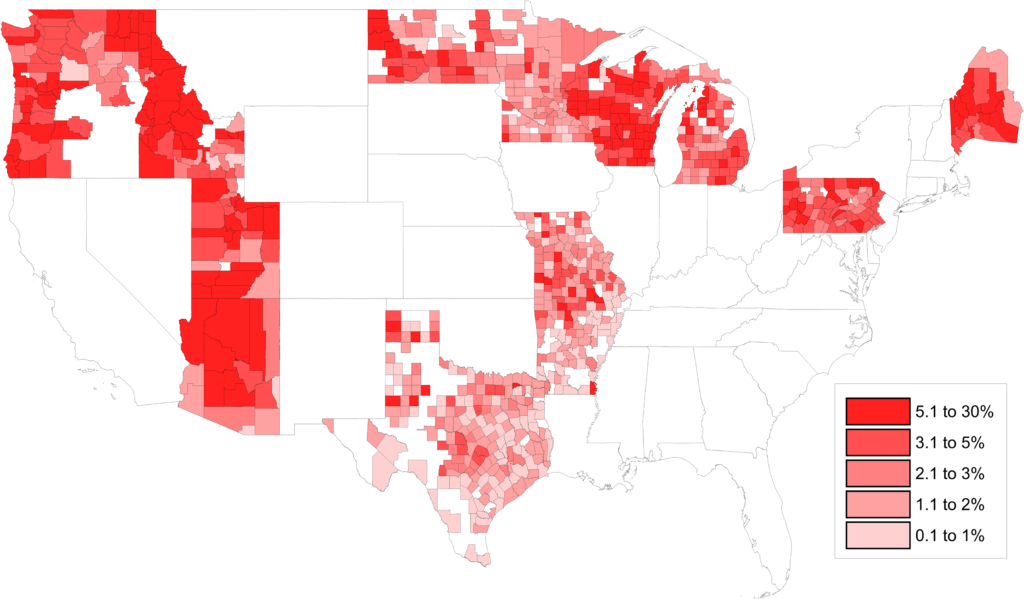 “Before we started vaccinating against measles, measles was the single leading killer of children in the world,” said Peter Jay Hotez, a vaccinologist at the Baylor College of Medicine.

Oregon has the highest exemption rates in the country, partially because of the anti-vaccination movement. Child vaccination rates for DTaP and MMR are around 93 percent in Oregon, which has witnessed a substantial rise in non-medical exemptions. Paul Cieslak, a medical director in the communicable disease prevention and immunization department at Oregon Health Authority, said that the exemption numbers jumped from 1 percent in 2000 to 7.6 percent for the 2016-2017 school year—a trend he attributes almost entirely to the anti-vaccination movement.

Another thing that worries Cieslak, he added: “The 7.5 percent exemption rate is not spread evenly across the schools in Oregon.”

The Dome School—the private school with the same vaccination rates as Venezuela—advertises “a healthy environment” for students on its website, and self-reported that 19 percent of preschoolers and 20 percent of kids K-12 had all of their required vaccines.

School administrator Susan Gustafson said that the private school doesn’t have an official stance on vaccinations and allow parents to do their own research on vaccines.

“[Parents] are choosing that route because they believe it’s best for their children,” Gustafson said.

Vaccines save lives, according to science

“The likelihood of a serious adverse event happening because of a vaccine is extremely low. It’s about one in a million, less than the likelihood of getting killed by lightning,” Hotez said.

A child who hasn’t received the measles, mumps, rubella vaccine is 35 times more likely to contract measles than a vaccinated child in the U.S., and 90 percent of unvaccinated people who come into contact with an infected person will catch the disease. Two doses of the MMR vaccine are 97 percent effective at preventing measles.

Rising exemption rates threaten more than just the unvaccinated. The mumps can still infect vaccinated people—as seen with a massive outbreak in 2006, which infected over 6,500 people in the Midwest, despite high vaccination rates. These unimmunized pockets put America at risk, but they’re also a worldwide issue.

The U.S. ranks high globally when it comes to vaccination rates, but there is still some variation between states.

Many governments are campaigning to catch up with Cuba, whose MMR vaccination rates have held steady at 99 percent for years.

Toddlers in Colorado have the same MMR vaccination rates as toddlers in Belize and Denmark (88 percent), while infants in New Jersey have hepatitis B rates lower than those of the Dominican Republic (60 percent in New Jersey, versus 67 percent in the Dominican Republic). Many governments are campaigning to catch up with Cuba, whose MMR vaccination rates have held steady at 99 percent for years. Massachusetts comes close with 98.3 percent.

But vaccinations rates and vulnerable pockets exist globally for a variety of reasons.

Despite overall coverage rates above 85 percent globally, there are high levels of unvaccinated kids in three types of communities, said Robin Nandy, UNICEF’s chief of immunization. Those pockets include areas far from health care, illegally created urban slums that lack health services, and war zones or areas of conflict..

Organizations like UNICEF have vaccinated billions of children since 2000, but the World Health Organization reported in August that more than 41,000 children and adults in Europe were infected with measles in the first six months of 2018—a number that exceeds 12-month totals for every other year this decade.

“Once you’ve achieved relatively high coverage, you’ve exhausted the proverbial low-hanging fruit, and everything that’s left is in difficult-to-reach areas,” Nandy said. “National coverage does hide huge differences within countries … even if coverage is high, you need to address the unvaccinated and poorly vaccinated pockets.”

How could the U.S. address these unvaccinated regions?

After the 2014-2015 measles outbreak in Disneyland that infected at least 147 people, California passed Senate Bill 277, a vaccination law requiring students entering kindergarten and seventh grade to be fully vaccinated.

In the year that followed, the number of kindergarteners up-to-date on their vaccines increased by three percentage points, and non-medical exemptions dropped to the lowest figure in over a decade.

The same happened in West Virginia. Before the state changed its laws, West Virginia Commissioner of Public Health Rahul Gupta said in an interview, parents could essentially submit exemption notes written on napkins. In 2015, the state government introduced Senate Bill 286, which required children entering child care and public schools to be up-to-date on their vaccines.

West Virginia now boasts some of the highest vaccination rates in the country. Gupta said the state jumped about 10 points from 2015 to 2017 for the 7-series of vaccinations—a multi-dose combination of polio, DTaP, MMR, haemophilus influenzae type b (Hib), hepatitis B, varicella and pneumococcal immunizations.

“That’s a testament to how having strong policies at the state level really protects your children and the state,” Gupta said.

*Editor’s note: Wyoming was the only state not included in the CDC survey because of issues with its data quality.

Also, the spelling of Kathy Kudish’s name was incorrectly written as “Kurdish.”