Are Americans eating better? Income inequality still has a seat at the dinner table

Much has been written about the growing income inequality in the United States. But another kind of gap is also widening between us, and it’s at the dinner table.

Overall, Americans are eating better. In the decade leading up to 2012, the number of people eating a poor diet fell from around 56 percent to under 46 percent.

Much like our politics and our incomes, the way Americans eat is becoming more and more divided.
But if you separate people out by income, it’s a different story. High-income Americans are eating better than ever — swapping fruit juice for whole fruits, replacing refined grains with whole grains, and eating tons of nuts — while the low-income group has improved much more modestly.

In other words, much like our politics and our incomes, the way Americans eat is becoming more and more divided.

Over the years, researchers have surveyed people to find out what they’re eating, asking them to report every little detail of the previous 24 to 48 hours’ worth of meals. From that, they’ve plotted various trends — sodium intake, amount of potatoes eaten, etc.

To get a glimpse of the overall healthiness of people’s diets, scientists used a rating system from the American Heart Association. The AHA’s ideal diet includes lots of fruits, vegetables, nuts, whole grains, and fish, while minimizing sugar, salt, processed meat, and saturated fat. People who meet less than two-fifths of these goals were classified as having a poor diet; those in the range up to 80 percent were classed as having an intermediate diet.

At the highest echelon, the elusive “ideal” diet is achieved by less than 2 percent of the population — few enough that the researchers weren’t able to study it in detail.

Source: Improvement Seen In U.S. Diet, Although Disparities Persist in Quality by Race/Ethnicity, Education and Income. Photo by Natalia Bronshtein

Put differently, “almost twice as many people at low incomes have poor diets compared to people at the highest income level,” said Dr. Dariush Mozaffarian, professor of nutrition at Tufts University and the lead author of the study published in JAMA on Tuesday.

And because in absolute numbers more people are poor now than a decade ago, that effect is even greater than it may at first seem. 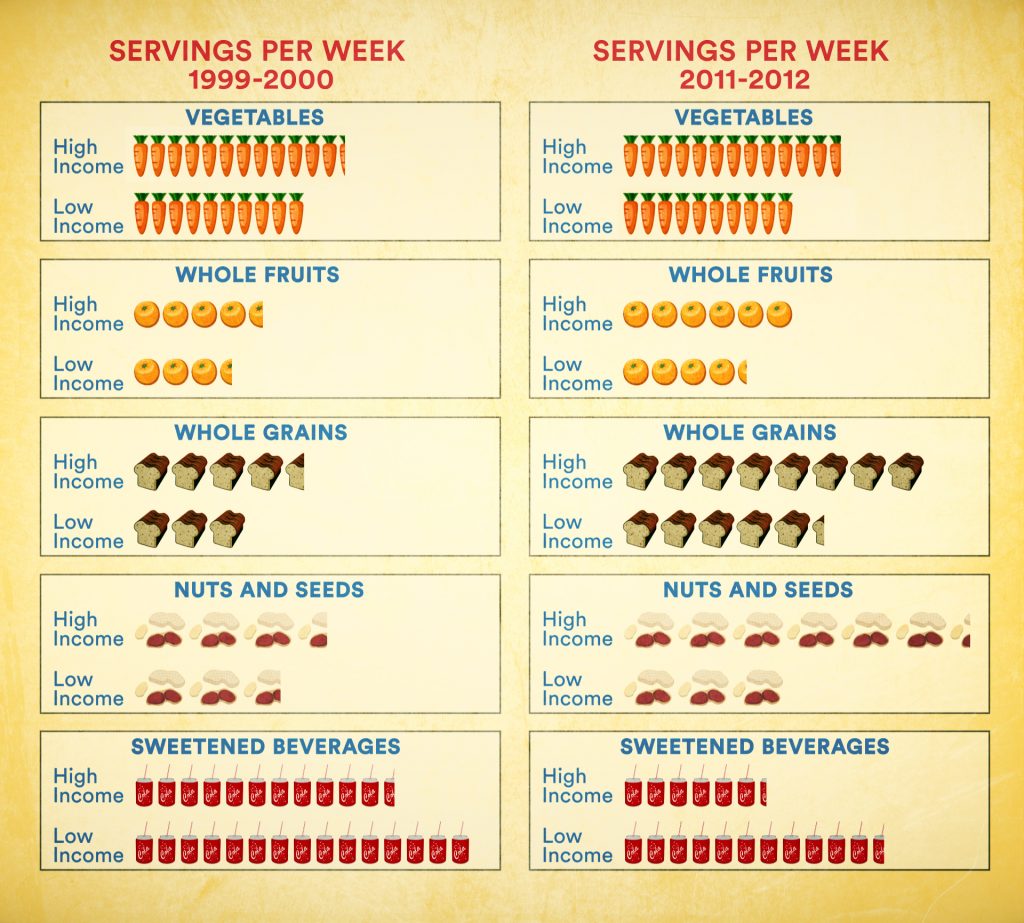 Various food groups reveal how the wealth gap in diet is widening. Infographic by Alex Hogan

Here’s how some of the trends break down:

What could be driving this trend? Food cost is undoubtedly part of the reason, but it doesn’t fully explain it, Mozaffarian said. “There’s a perception that healthier foods cost more, and part of that is people think of Whole Foods and other places, but there are plenty of healthy foods in a grocery store that are relatively inexpensive. And certainly almost any food in a grocery store is less expensive than going and getting it pre-prepared.”

Other, less tangible factors therefore also play a role. “There’s a time cost to buying foods and preparing them yourself. There’s a knowledge barrier,” Mozaffarian said.

Mozaffarian thinks that many policies could help close the diet gap, but would especially like to see reform of the Supplemental Nutrition Assistance Program, or SNAP (formerly the Food Stamps program), to include incentives for eating healthy. Right now, people can buy any kinds of food with SNAP except hot foods or prepared foods. The low-income people monitored in the survey are all SNAP-eligible, so reform of that program would likely have a big effect.

“As the economy in general has worsened, people who are worse off have suffered the most and we see that with food too,” he said.

This article is reproduced with permission from STAT. It was first published on June 21, 2016. Find the original story here.