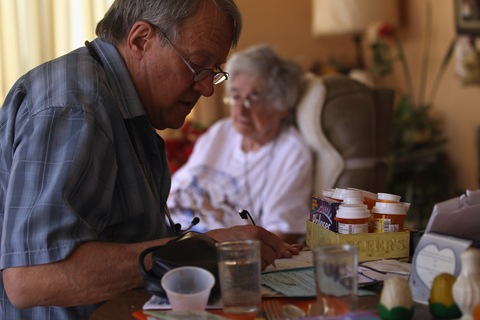 It’s a classic case of denial. Roughly half of Americans above the age of 40 believe “almost everyone” is likely to require long-term care as they age. Just a quarter think they will need it for themselves.

The truth: 70 percent of Americans older than age 65 will need some form of long-term care.

That gap means most Americans are doing very little to plan and save for the assistance they’ll desperately need in old age, according to a new poll from the The Associated Press-NORC Center for Public Affairs Research.

“It’s rather surprising,” said Jennifer Agiesta, director of polling for the Associated Press. “Very few people have arranged to pay for or even to think about their own needs. Most haven’t even taken the basic step of talking to family members about their preferences.”

The problem will only become worse as America grays, with the number of seniors expected to nearly double by the time the last of the baby boomers turn 65. In 2030, seniors are expected to make up 19 percent of the U.S. population — up from 12 percent in 2000.

Click on the graphic below to see how concerned the survey participants were about various aging issues: 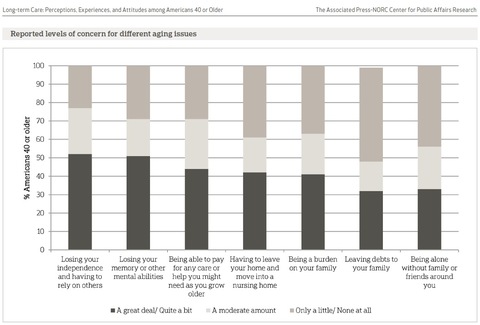 Why such rampant lack of planning? For one thing, Agiesta said, “people tend to guess wrong when they think about how much long-term care will cost them.” They underestimate the costs of nursing home care, overestimate the cost of assisted living and “are all over the place when you ask them what the costs are for a home health care aid,” she said.

To an equal extent, they believe Medicare has their backs. Close to half — 44 percent — expect Medicare to pay for ongoing care at home by a licensed home health care aide, and 37 percent believe it pays for ongoing care in a nursing home.

But it doesn’t. As the AP-NORC report points out, Medicare only pays for “medically necessary care in a skilled nursing facility.” In rare cases when home health care is approved, it’s provided “under very limited circumstances and for brief stretches of time.”

Meanwhile, 54 percent of the survey participants said they don’t anticipate needing Medicaid, the largest payer for long-term care — even though many of them lack confidence in their ability to pay for those same services as they age.

How much do Americans think their long-term care will cost? Click the graphic below to expand:

But the bigger issue may be that most Americans simply don’t want to think about aging.

Nearly a third of those polled said they “would rather not think about getting older at all.” When pressed, 52 percent said they had a “great deal” or “quite a bit” of concern about losing their independence and having to rely on others as they age. And 42 percent said they worried about having to leave their own home and move into a nursing home.

The survey found that “significant majorities” prioritize almost anything that will give them more independence. That includes purchasing homes with no stairs and living close to family members, health care services and stores. Nearly seven in 10 were confident they’ll be able to rely on family members “a great deal” or “quite a bit” in a time of need.

What specific steps are Americans taking for long-term care? Click the graphic below to expand: 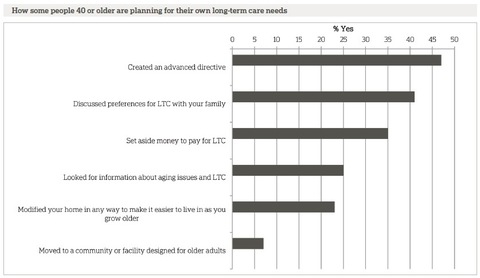 Even though most older Americans “aren’t doing much” to prepare for their own long-term care, the vast majority are supportive of a program that would help them do so, Agiesta said.

Roughly three-quarters of those 50 and older — a full 77 percent — support tax breaks to encourage saving for ongoing living assistance, similar to a 401(k). Half favor a government-administered long-term care insurance program, like Medicare. And about a third support a requirement that individuals purchase long-term care insurance. 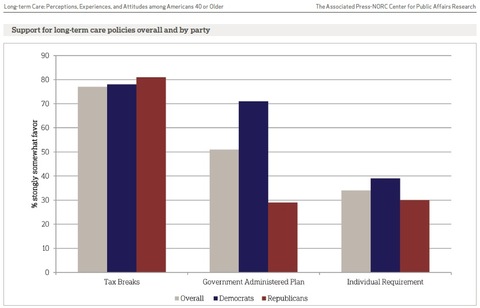 Policy options aside, Agiesta said one of the biggest obstacles will be counter-acting the widespread belief among so many Americans that “other people are going to require much more care” than they will themselves.

“As they approach this age and this stage of life, people should be thinking more critically about what they’re going to need,” she said. “Because it’s probably not that different than what everybody else is going to need.”

The SCAN Foundation, which funded the AP-NORC survey, is an underwriter of the PBS NewsHour. Top photo by John Moore/Getty Images. All graphics were produced by The Associated Press-NORC Center for Public Affairs Research.