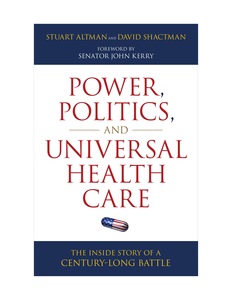 “Failure Again.” It was the working title for Stuart Altman’s new book on the latest push for health care reform.

Two years after President Obama’s Affordable Care Act became law, Altman is the first to admit he happily changed the title to “Power, Politics and Universal Health Care: The Inside Story of a Century-Long Battle.” But he had reason to be skeptical.

As an adviser and architect of health care reform policy for five U.S. presidents — both Democrat and Republican — Altman had seen every attempt at universal health care crippled by political maneuvering, special-interest propaganda, even multiple sex scandals.

He recently stopped by the PBS NewsHour to talk with health correspondent Betty Ann Bowser about “Power, Politics and Universal Health Care,” which places President Obama’s historic win in context: at the end of a century’s worth of tough lessons, false hopes and broken promises. He also shares his thoughts on why health care prices keep skyrocketing, the prospects for a single-payer system and the person he believes is responsible for the reform law’s structure: Richard Nixon.

A transcript is after the jump.

Betty Ann Bowser: Very few people know as much about health care and health care policy as Stuart Altman. He’s been an adviser to five American presidents — both Republicans and Democrats. And he’s just written a new book, “Power, Politics, and Universal Health Care.” It’s really kind of a collection of all of the things from your 40-year-plus career. What’s your favorite anecdote?

Stuart Altman: Well, I think it was the church. You know, back in 1974, I was working for President Nixon. And very few people know this, but there was a serious attempt by President Nixon and Caspar Weinberger, who was secretary, to work with Sen. Kennedy and Wilbur Mills, who was then the powerful chair of the Ways and Means Committee, to see if they could come up with a combined plan. But all the forces didn’t want anybody to know that they were having these secret meetings. And so we met at a church up near the Capitol, St. Mark’s Church, to try to see if we could reach agreement. Somehow in the church, we all thought we had agreement. But when it went out into broader politics, it all fell apart.

Bowser: And what was this? About getting more Americans insured?

Altman: It was a complete decision to bring everyone covered, to use the private sector where it worked, to have private insurance, to protect Americans, to use subsidies for people to buy insurance. And also, to sort of do away with any of the problems of the insurance industry for certain circles.

Bowser: People are probably surprised to hear that a Republican, Richard Nixon, had a lot of ideas about all this.

Altman: Well it is a surprise. And when I talk to people who have not always the most favorable view of Richard Nixon, and then they start looking into the kind of legislative history that was in his administration, like the Clean Air Act, civil rights, a whole variety of areas that you would never attribute to Republicans, and he was pretty forceful, as was Caspar Weinberger, that they wanted to provide a plan. And as it turns out, the plan that we put together was the model that was used by Obama during his … actually Romney in Massachusetts. So recently I wrote a little piece that said, ‘Rather than Obama borrowing from Romeny, both Romney and Obama borrowed from Nixon.’

Bowser: One of the major things that really is not addressed very much in the law that passed — the federal health care reform bill — is cost. Every time a foundation does a report on cost, just up, up, up, up. What do you think the answer is?

Altman: Well the answer is unfortunately that had this law really seriously dealt with costs, it could not pass. Really what it boils down to is just what I said before, every major constituent group — I’m talking about the big health groups — support universal coverage. But if it negatively affects them, which is what cost-containment would do — they say, ‘Maybe we should keep the status quo.

Bowser: Do you think we’ll ever get to a point in this country where single-payer will be a realistic prospect?

Altman: As I said in the book, when a health policy analyst went to heaven, he asked God the same question: ‘Will America ever have a single-payer system?’ And God said, ‘Absolutely. Just not in my lifetime.’ I’m afraid that little story is true. Americans just are not prepared to let government be responsible for all of their health care. Even though it makes sense in terms of simplicity, and you can make the case that it’s less expensive. But on the other hand, it changes the focus, and it puts a lot of power in the hands of government. And so I think, well I know, that every time we’ve ever talked about it, it’s political suicide.

Eighty five percent of Americans, year in and year out, say they believe everyone should have universal coverage. The problem is everybody has a different idea of how to make it work. And unfortunately what you have is 85 percent of Americans are reasonably well-insured. And when you start thinking about how you’re going to get the remaining 15 percent, everyone gets very nervous. Is it going to cost me money? Is it going to affect the quality of my care? Is somehow the health care system going to be worse off? And you see that right now. Here’s this piece of legislation that covers everyone. And yet 50 percent of Americans think we should repeal it. And the reason is, they look at some aspect of it and say, ‘Somehow my life is going to be worse off.’ Whether it’s true or not.

Bowser: You talk a lot about your mom in this book. And what was really fascinating to me is, here you are, this big health policy expert and when your mom got old and was close to the end of her life and had all of these things going wrong with her health and was on Medicare, you were just as confused as the next guy about what to do to take care of his mother. You think that’s fairly typical regardless of where you are on the learning curve of health policy?

Altman: Well I think so. That’s why I talk about my mother. First, my mother was symbolic in my mind of people who are sharp but of advanced age. And I tried to use my mother as an example of the pressures of an individual. And of course, you’re right. I mean, here was me and my family trying to decide what to do for a 90-year-old who had serious heart problems. And we fell into the same problem that probably thousands, if not hundreds of thousands of families … we didn’t know what to do. And as we said in the book, we didn’t know what to do, but the one thing we never thought about was the cost of the care. Ultimately, we did fairly extensive surgery and unfortunately it didn’t work too well.

Bowser: Dr. Altman, thank you very much for being with us.

Altman: Thank you so much for letting me.

Bowser: And the book is “Power, Politics and Universal Health Care.”