After a C-section, women who want a vaginal birth may struggle to find care

For hours, Alicia Skrenes paced around a hotel room two hours from her home, waiting to be far enough along in labor to go to the hospital.

Skrenes had been in labor twice before, and both times resulted in a C-section. This time, after months of frustrating research, meeting with 10 doctors and two doulas, calling advocacy groups and learning about birthing options, she was determined to have a vaginal birth, but had not found a hospital in her area that would accept her plan.

Skrenes’ story is not unique. Some women who have had one or more cesarean sections, like she did, may want to give birth vaginally with their next child, a practice known as a vaginal birth after cesarean, or VBAC. VBACs are controversial in the American medical community, and some hospitals or doctors refuse to perform them, despite guidance from the American College of Obstetricians and Gynecologists that they are a safe option for many women.

After having a C-section, women may want a VBAC because they want to avoid major surgery, have a religious or personal preference or had a traumatic C-section experience in the past.

But hospitals or doctors cite their own reasons for refusing VBACs. It’s faster and easier for a practitioner to schedule a C-section than to wait for a patient’s labor to progress naturally, and, a new international review suggests doctors may choose C-sections to guard against malpractice lawsuits.

Meanwhile, some pregnant women who want VBACs are putting themselves in risky situations because they can’t find a hospital or care provider who will allow them to try. Some resort to driving themselves hours while in labor, alone. Others leave a hospital mid-labor to find another doctor. They’ve had doctors refuse care during childbirth, and the hundreds of hours, sometimes months, spent on research, appointments and searching for a care provider take their toll.

“It was about six months of actively making calls, researching, going to appointments and being told ‘no,’” said Alyssa Schaffer, a senior scientist at the Simons Foundation living in Manhattan, who sought a VBAC. “It was a lot of emotional turmoil, to be honest, facing all that rejection.”

The controversy around VBACs

In some cases, C-sections are medically necessary, even life-saving. But cesareans come with serious risks, such as higher chance of blood loss, infection, issues with the placenta and a higher risk of maternal death than with a vaginal birth. And additional risks arise for someone planning to get pregnant again, like the chance of placenta accreta, where the placenta grows into the uterus, often at the site of the scar. Nine out of ten women with placenta accreta will need a blood transfusion to avoid bleeding out.

The World Health Organization (WHO) recommends an ideal C-section rate of 10 to 15 percent of all births. The current rate in the US is 31.5 percent — about one in three babies. Black women are more likely to have medically unnecessary C-sections, and have a higher rate of maternal mortality overall. According to the WHO, maternal mortality rates don’t improve if the C-section rate is over 15 percent.

This creates a compounding problem: If C-section rates continue to rise, and many care providers won’t allow VBACs, subsequent births are likely to be by cesarean too, driving the rate up even further.

Disagreement about VBACs often centers around childbirth complications that can come up if a woman has had a past C-section. According to the American College of Obstetricians and Gynecologists (ACOG), a mother’s uterus has less than a 1 percent chance of rupturing at the site of a C-section scar if she attempts a vaginal birth. That risk increases to a little less than two percent after two or more C-sections.

That percentage is the focus for a huge debate between patients and providers.

“Statistically, it’s more likely that I’ll get in a car accident on the way to the hospital than the chance that I’ll have a rupture during childbirth,” Skrenes said. “The chance that it’ll happen is so tiny. So tiny! So why won’t they let me try?”

But for Carol Gurney, who practiced high-risk obstetrics in a rural Iowa family clinic for 17 years, the risk is palpable.

In some areas of the U.S., it can be very difficult to find a hospital or doctor who will support a woman attempting a vaginal birth after cesarean, or VBAC.

“Sure, one or two percent seems small,” she said. “But if you put that in perspective, that’s one or two in 100 women. And that starts to feel very different, in light of the consequences of a ruptured uterus, which can be absolutely devastating for the baby and mother.”

Uterine rupture during a vaginal birth at the site of the C-section scar can range from manageable — treated after the birth with stitches — to deadly.

“Put it this way,” she continued. “If a flight had a one in 200 chance of crashing, would you get on the plane?”

Gurney said there’s a very small possibility the baby can be pushed through through the rupture in the uterus, which is extremely dangerous for both the mother and baby. “It’s essentially like the baby is underwater, drowning,” Gurney said. “They can be neurologically devastated for life, if not dealt with as quickly as possible.”

For Gurney and other practitioners, sometimes, the consequences of a VBAC gone wrong can far outweigh the benefits of offering one. Obstetricians and gynecologists are among the most-sued medical professionals in the U.S., with 85 percent saying they had been sued for malpractice at least once in Medscape surveys from 2015 and 2017.

In some areas of the U.S., it can be very difficult to find a hospital or doctor who will support a woman attempting a VBAC, said Lori Swain, president of the Oregon affiliate of the American College of Nurse-Midwives.

Twenty-six states have laws with restrictions on VBACs limiting them to hospital settings, meaning, in certain states, midwives can’t offer them at birthing centers, smaller family clinics or home births. With rural hospitals closing across the board, this can limit options in many areas. Erica Myers, a nurse in Delaware who is currently seeking a VBAC, said she drives three hours weekly to and from the Pennsylvania border to the only hospital she could find with a VBAC-supportive midwife. 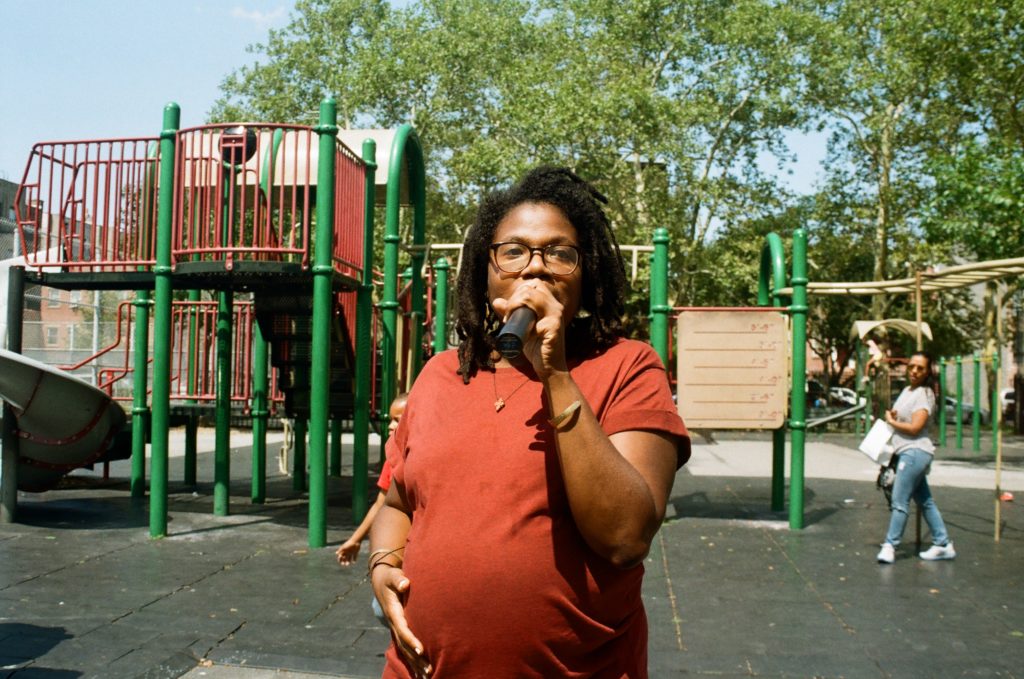 Chanel Porchia, Founder of Ancient Song Doula Services in Brooklyn, NY speaks at a breastfeeding event in Brooklyn in 2017. Porchia and her doulas assist women with a variety of birthing issues, including seeking VBAC and avoiding unnecessary C-section. Photo courtesy of Chanel Porchia

“There are whole towns, whole counties here where you can’t get a VBAC,” said Justen Alexander, vice president of the International Cesarean Awareness Network, referring to her native Alabama. Chanel Porchia, founder of Ancient Song Doula Services in Brooklyn, New York, said only a handful of New York City-area hospitals are VBAC-supportive.

Access to VBAC-supportive care can already be hard, said Porchia. “And that’s compounded when you have other factors like race, socioeconomic status, come into play.”

A new international review of existing research on decision-making in birth backs up what VBAC advocates say they’ve known for a long time, and some care providers openly acknowledge: that some doctors perform C-sections defensively, to lower the risk of a lawsuit.

“Doctors and obstetricians are sued when babies die, even when they aren’t negligent. They very much want to prevent a lawsuit, and a C-section is one way to do that,” said Indra Lusero, a staff attorney for the National Advocates for Pregnant Women and founder of the Birth Rights Bar Association. “And they might have a supervisor or a hospital manager saying to them, the last thing we need is another lawsuit.”

“They’re sued more often for not doing a C-section than for doing it,” Lusero said.

Gurney said the fear of being sued can be a deciding factor for providers. “If you’ve done a C-section, that’s considered the most you could have done, you’ve done literally all you can to save the mom and baby,” she said.

Fear of litigation, combined with conflicting interpretations of the different risk factors, can sometimes turn practitioners and patients against each other, Alexander said.

Pressure and coercion in hospitals

“I didn’t want to fight something while I was in labor … I didn’t know if I’d even be able to.” — Alicia Skrenes

Porchia said she has personally dealt with many women being pressured into C-sections. “We’ll get women calling us at 35 weeks, 37 weeks saying that their doctor said they were VBAC-supportive in the beginning, but now keep trying to convince them to have a C-section,” she said. Those women then have the choice to leave their doctor mere weeks before their due date, or, Porchia said, “they’re going to have to fight for what they want, and labor at home as long as possible.”

When Porchia had her own VBAC, she chose to do it at home with a midwife. She said that after her years working as a doula, she thought there was very little chance of being able to go through with a VBAC in a hospital.

Being pressured into having a repeat C-section happens often enough that, when calling into the International Cesarean Awareness Network (ICAN), one of the biggest advocacy organizations around preventing C-sections, a recording of a woman’s voice says, “Press three if you feel you’re being forced into a C-section.”

Press three, and the message will ask whether the caller is currently in labor. Press two for yes, and you’ll be connected to one of ICAN’s volunteer representatives, many of them with legal or medical backgrounds. Alexander said she fields many of the calls herself, and has talked through hospital situations with countless women.

When talking a laboring woman through a situation in which she feels she’s being forced into surgery, “I always tell them to ask for quiet time to pray about it,” Alexander said. “That’s generally more respected than asking for time to think. Then, when they’re left alone, they can call a lawyer, or consult more with me, and they can send their partner to go find the hospital patient advocate.”

ACOG issued guidelines in 2016 stating that pregnant women have the right to refuse treatment, including a C-section.

“It is not ethically defensible to evoke conscience as a justification to attempt to coerce a patient into accepting care that she does not desire,” the guidelines say.

That’s why Skrenes went through the months of research she did before finally finding a fully VBAC-supportive doctor. “I didn’t want to fight something while I was in labor,” she said. “I didn’t know if I’d even be able to.”