Column: How Big Pharma is hindering the fight against the opioid epidemic

“A crippling problem.” “A total epidemic.” “A problem like nobody understands.” These are the words President Trump used to describe the opioid epidemic ravaging the country during a White House listening session in March.

The percentage of people in the U.S. dying of drug overdoses has effectively quadrupled since 1999, and drug overdoses now rank as the leading cause of death for Americans under 50.

Drugs do exist to reverse opioid overdoses or treat long-term opioid addiction. But while opioids have become easier and easier to obtain through illicit markets and sellers on the dark web, a drug that could save countless lives has become increasingly out of reach.

Consider the addiction treatment drug, Suboxone. Patents and other exclusivities on the basic version of Suboxone expired some time ago, yet the price remains sky-high, and access problems persist. Oral film strips now cost over $500 for a 30-day supply; even simple tablets cost a whopping $600 for a 30-day supply. The cost alone puts the medication out of reach for many.

Pharmaceutical companies have brought tremendous advances in medicine. I believe they should be adequately compensated for the enormous amount of time and resources needed to develop a new drug. Our intellectual property system is designed to do just that, rewarding companies that bring new drugs to market with a competition-free period – 20 years from the patent application date – during which they can recoup their profits.

After this defined period, generic versions of the drug are supposed to appear on pharmacy shelves, bringing down prices to levels that can be borne more easily by consumers and the health care market generally.

Brand-name companies, however, engage in myriad games to make sure theirs is the only version of the drug on pharmacy shelves, long after generics should have joined the ranks. 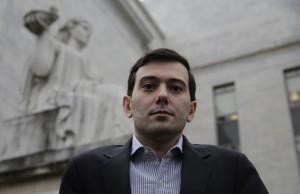 Martin Shkreli, former CEO of Turing Pharmaceuticals LLC, departs the U.S. Capitol after appearing before a House Oversight and Government Reform hearing on “Developments in the Prescription Drug Market Oversight” on Capitol Hill in Washington February 4, 2016. Photo by Joshua Roberts/REUTERS

Martin Shkreli, the infamous pharmaceutical industry CEO responsible for hiking the cost of his company’s lifesaving drug from $13.50 to $750 overnight, once tweeted that “Every time a drug goes generic, I grieve.”

And it is not just a case of a few bad apples. Complex schemes to hold off generic competition are widespread throughout the pharmaceutical industry, as I have found in my research.

Legislators on both sides of the aisle have decried sky-high drug prices, but it can be hard to pin down the specific behavior to address. Pharmaceutical game-playing has grown over the decades into a multi-headed monster, with a new tactic popping up as soon as the old one is cut off. My colleague and I set out to clearly identify and expose these various games in our book, “Drug Wars: How Big Pharma Raises Prices and Keeps Generics Off the Market.”

Lack of access to addiction treatment drugs like Suboxone can be traced, in part, to the soaring prices, access problems and anti-competitive conduct that has become business as usual in the pharmaceutical industry across the board.

One game we analyzed involved the filing of petitions at the Food and Drug Administration (FDA) that raise unfounded or frivolous concerns in an effort to delay generic competitors.

Some of the petitions were just stunning to us. For example, some petitions soberly ask the FDA to require, well, what it already requires, such as ensuring that the generic drug product is stable and has an appropriate shelf life. Other petitions tie the application up in knots for reasons that are hard, even for the FDA, to discuss with a straight face.

For example, the company that manufactures the blood pressure medicine Plendil filed a petition asking the FDA to delay approval of generics by citing concerns over how different types of oranges in orange juice might affect absorption of the medication and demanding additional information on the juice used in the clinical trials.

Although 80 percent of these petitions are eventually denied, it takes time and resources for the FDA to review each petition.

Citing concerns over citizen petition games, Congress recently required the FDA to respond to such petitions within five months, but a five-month delay for a blockbuster drug can be worth hundreds of millions of dollars. (The Federal Trade Commission recently filed an antitrust suit against Shire ViroPharma for attempts to hold off competition related to its gastrointestinal drug Vancocin, a campaign that included 24 filings related to a single petition.) Congress also gave the FDA the ability to summarily deny petitions when appropriate, a power that the FDA has failed to use even once.

By parsing through 12 years of FDA data, we found that out of all citizen petitions filed, the percentage of petitions with the possibility of delaying generic entry doubled since 2003, rising from 10 percent to 20 percent. Thus, in some years, one in five petitions filed at the FDA on any topic, including tobacco, food and dietary supplements, had the potential to delay generic competition.

Moreover, we found that 40 percent of such petitions were filed a year or less before the FDA approved the generic, indicating that companies are using these petitions as a last-ditch effort to hold off competition.

There are plenty of other games to play, as well. For example, generic applicants need samples of the brand-name drug to show the FDA that their version is equivalent; some brand-name companies flatly refused to sell samples to generic companies.

Another common tactic involves making tiny modifications to the dosage or formulation of a drug just as the original patents are about to expire. This strategy, known as “product hopping,” allows the drug company to obtain a brand-new set of patents on their “new and improved” version of the drug.

Even if the patents are overturned – and studies show that generics convince courts to overturn the majority of patents they challenge – the process again takes time.

Much of the attention is focused on patents, but the 13 regulatory exclusivities that the FDA doles out also play help create competition-free zones. These offer months or even years of additional protection, by taking steps such as carrying out pediatric studies or developing drugs for rare diseases termed “orphan drugs.” Drug companies have stretched these systems to the point at which the costs to society far outweigh the benefits.

The crippling cost of medicine

One can understand the motivation – delaying entry of a generic competitor for even a few months can translate into billions of dollars in extra revenue for the brand-name company. Thus, drug companies string out games that obstruct and delay competition, one after another. As I noted when testifying before Congress about such strategies, “A billion here, a billion there; that adds up to real money.”

In 2015, 80 percent of the profit growth of the 20 largest drug companies resulted from price hikes. And drugs are vastly more expensive in the U.S. than abroad. (The liver failure drug Syprine, for example, sells for less than $400 a year in many countries; in the U.S., the average list price is US$300,000. Gilead’s hepatitis C drug, Sovaldi, reportedly sells for the equivalent of $1,000 abroad – in the U.S., it sells for $84,000.)

The industry can do this, in part, because unlike the demand for other goods, the demand for pharmaceuticals is highly inelastic. Consumers will continue to pay for the drugs that can save their lives, even if it breaks the bank.

The impact on addiction treatment

Nowhere is the pain of these games more troubling than in the market for opioid addiction medicine.

Pharmaceutical companies often argue that high profits are needed to fund development of new drugs, some of which don’t make it to market.

“The competitive market is structured to take maximum advantage of savings from brand competition,” testified Anne McDonald Pritchett, vice president, policy and research for the Pharmaceutical Research and Manufacturers of America.

However, open and vigorous competition is certainly not what the manufacturer behind the addiction treatment drug Suboxone had in mind when it combined several games to fight off generics appearing on the horizon. These games included product hopping (shifting the market to a new form of the drug just as the exclusivity expires so pharmacists cannot fill the prescription with a generic), refusing to cooperate with generic companies on safety plans, and petitioning the FDA to impose safety measures on generic versions that were never required for the brand-name version.

The opioid addiction epidemic is a complex problem, and there are no simple answers. One thing, however, is certain. The U.S. system should not reward companies for blocking generic competition. When we do that, the American public pays the price.

Robin Feldman is a professor of intellectual property at the University of California, Hastings. This article was originally published on The Conversation. Read the original article.