700 new moms die each year in the U.S. Could Medicaid help?

The United States ranks as one of the most dangerous developed nations to become pregnant and give birth, especially for women of color — and data shows the life-threatening risk doesn’t end once mom and baby have left the hospital. Bipartisan legislation that is currently working its way through Congress aims to help lower those risks by ensuring that women have access to care longer after giving birth, given the high incidence rates of potentially fatal postpartum health challenges.

Dubbed as part of the “Momnibus,” the Helping Medicaid Offer Maternity Services Act — or H.R. 4996 — would extend Medicaid coverage to women without health care insurance for 365 days after she gives birth. An estimated 12 percent of African American women are uninsured in the U.S., nearly double the percent of white women who are without insurance, according to analysis from the Kaiser Family Foundation. Medicaid is the largest maternity care payer in the U.S., covering nearly half of all births, and currently, a new mother qualifies for coverage up to 60 days after delivery.

Each year, federal estimates suggest 700 U.S. women die from pregnancy-related complications. Among those mothers, more than half do not survive their baby’s first year. Problems can include excessive bleeding, hypertension or eclampsia — high blood pressure that leads to seizures — that have not been detected in the hospital, as well as suicide or death linked to postpartum depression.

“Mommas shouldn’t die giving birth. Hopefully, we can all agree on that.”

“When the baby’s born, we stop paying attention to the mom,” said Alison Stuebe, associate professor in the University of North Carolina’s Department of Maternal and Child Health.

She compared the issue to having a piece of wrapped candy, with the baby being a sweet confection and the mom a wrapper. In other words, health policy is often tethered to the baby, experts say. Once the baby is no longer part of the mom, we lose track of the mom’s health and focus on the newborn. 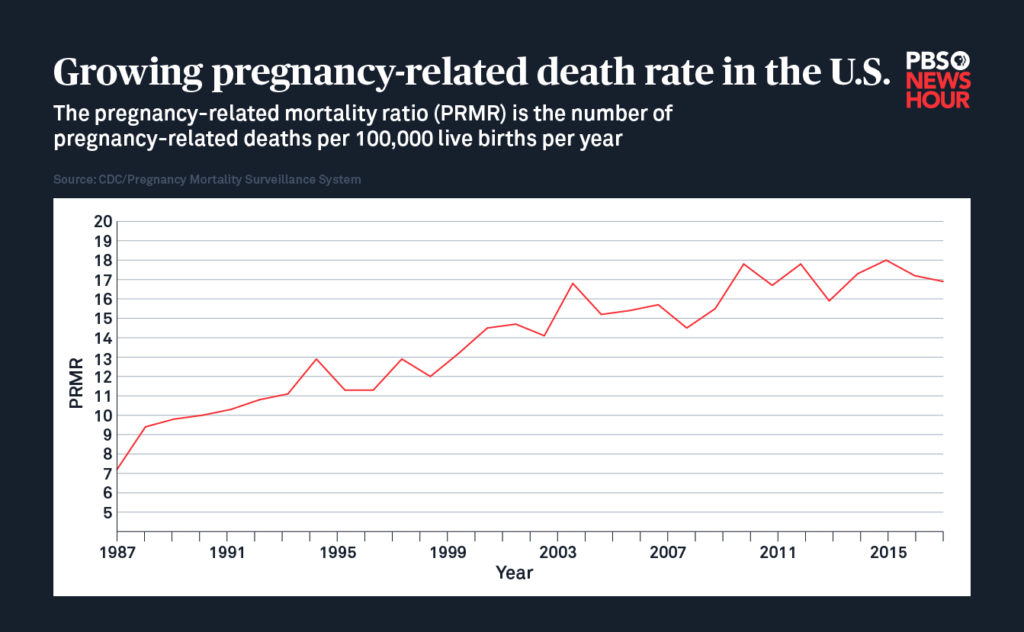 Pregnancy-linked deaths among women have increased in recent years nationwide, according to data from the Centers for Disease Control and Prevention. Infographic by Megan McGrew

Efforts to strengthen the postpartum safety net have come to the fore amid growing attention to the worsening maternal mortality rate nationwide, but also major disparities in care and outcomes for women of color, including high-profile incidents where celebrity moms faced near-death scares.

In 2011, tennis star Serena Williams was recovering from an emergency C-section when she began to experience symptoms that made her believe she was having a pulmonary embolism — a life-threatening blockage in her lungs that can be fatal 30 percent of the time. Williams told Vogue that the nurse she talked to believed she was just confused due to pain medicine. Williams said she repeatedly asked for a CT scan and a blood thinner before the medical team obliged and discovered several small blood clots, which led to multiple surgeries and other complications.

Critics have pointed to that incident as one more example of the medical community not taking seriously the health needs of black women and other women of color, due to racial bias. Making the U.S. a safer place for all women to give birth is urgent, Stuebe said.

“Mommas shouldn’t die giving birth,” Stuebe said. “Hopefully, we can all agree on that.”

Originally part of a bundle of maternal health bills introduced in the House of Representatives, the bipartisan bill passed out of committee and is up for a vote before the full House. House leadership is deciding when the bill could go up for a floor vote, and Hill staffers speculate that it may happen in early 2020. The outlook is dim for the bill’s prospects of surviving in a Republican-led Senate, but tentative talks continue.

Advocates and health experts remain hopeful that this bill will pass, especially because the first year of a baby’s life is “so vulnerable” for the mother as well, said Samantha Meltzer-Brody, who directs the Center for Women’s Mood Disorders at the University of North Carolina.

“If a mom is having health issues, mental health or others, and is not seeking her own care, it’s going to impact her ability to mother her child in a way that would not be optimal,” Meltzer-Brody said. “That would have significant health consequences for the child.”

With a maternal mortality rate of 23.8 per 100,000 deaths, the U.S. is the only country among its peers where that rate has risen in recent years. It’s also the only developed country without nationally mandated paid maternity leave, according to data from the Organisation for Economic Co-operation and Development.

Overall, maternal mortality statistics paint a grim picture of childbirth in the U.S., but that figure grows bleaker if you analyze those numbers based on a mother’s race and ethnicity. Nationwide, black women face a 3.3-times greater risk of dying from pregnancy or childbirth than white women, according to recent data from the Centers for Disease Control and Prevention. That’s true even when everything else is equal — with the mothers earning the same level of education and income or have the same health status.

The data is “alarming,” said Lucia DiVenere, officer for government and political affairs for the American College of Obstetricians and Gynecologists. But it’s also one reason why the national conversation around maternal mortality is growing, because health care providers are doing a better job of gathering data to help create a more complete picture of this problem’s scale and scope, DiVenere said.

According to CDC data, a third of preventable maternal deaths happen up to 365 days after childbirth, she said. If not directly related to pregnancy complications, these deaths could occur for a variety of reasons — after a mother loses treatment for opioid use disorder, relapses and overdoses, or from a previously undetected heart condition. For example, if someone is managing opioid use disorder through Medicaid coverage, if that safety net is removed after 60 days, the mother must then grapple with the stress of raising an infant and coping with opioid use without support, health experts say. So, even if the coverage is expanded to 365 days, some say it is still not enough.

“It’s a national tragedy,” DiVenere said. “It’s something we can prevent.”

Does the bill do enough to narrow racial disparities in maternity care?

This legislation was championed by Rep. Robin Kelly, D-Ill., who said in a released statement that this is an issue of maternal justice.

But these proposed changes would come at a politically fraught time for Medicaid. Under the Trump administration, the Centers for Medicare and Medicaid Services has encouraged states to restrict access to Medicaid through waivers. While this bill has received bipartisan support in the House so far, the Trump administration’s stance could signal trouble if it reaches the Senate.

“If a mom is having health issues, mental health or others, and is not seeking her own care, it’s going to impact her ability to mother her child in a way that would not be optimal.”

A “lack of conversation and a lack of pressure” created the nation’s racial disparities in maternal care, and the solution will demand more than access to care, said Nastassia Davis, who founded and serves as president of the Perinatal Health Equity Foundation.

While she supports the Medicaid legislation, Davis said more must be done to hold hospitals, physician practices and all medical “systems accountable when there is a maternal death.” She said that it is unclear if hospitals are “doing anything to correct that action” because that information is not publicly available.

Davis cautions that even if a woman is granted a year of health care coverage under Medicaid after giving birth, that “access does not mean it’s good care.”

As a hospital nurse, Davis said she has witnessed this firsthand how structural racism and implicit bias among staff can influence health outcomes, times when she needed to advocate for her patients. In one instance, a patient who had given birth was hemorrhaging. Despite severe blood loss, Davis said the attending physician did not think it was necessary to check the patient’s vital signs.

Her blood pressure “was not stable,” Davis said, who persisted up “the chain of command to get her the help she needed.”

This is not uncommon in hospitals that serve people in low-income or predominantly black neighborhoods, she said.

“If you deliver in those places, you are more likely to receive care that is outdated.”

If you or someone you know has talked about contemplating suicide, call the National Suicide Prevention Lifeline at 1-800-273-8255, open 24 hours a day, seven days a week.

Left: Each year, federal estimates suggest 700 U.S. women die from pregnancy-related complications. Among those mothers, more than half do not survive their baby’s first year. Photo by Getty Images