COVID-19 has eroded confidence in the U.S. health care system

Americans pay far more for health care than any other developed nation, while suffering worse outcomes — it’s not a new reality, but the toll and stress of the COVID-19 pandemic has made that paradox more urgent. And in the final months of the 2020 presidential race, it seems to be affecting how Americans see the United States’ health care system, according to the latest PBS NewsHour-Marist Poll.

Since the pandemic began, more than a third of Americans — 35 percent — feel their health care system is below average worldwide. That’s up from 25 percent in February, a significant upswing from when early outbreaks of COVID-19 were detected in the U.S. Fewer Americans — 21 percent — than in February also describe the country’s health care system as average compared to other countries. Back then, 28 percent of Americans felt that way. 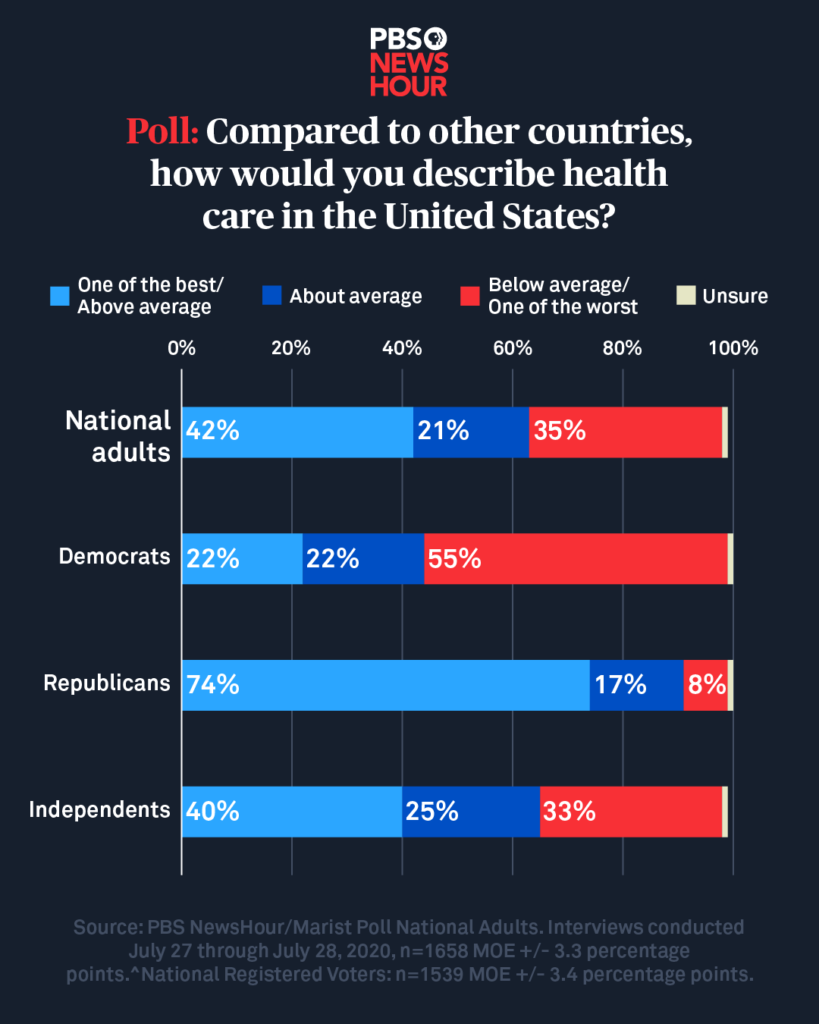 More than half of U.S. adults — 55 percent — say they have a favorable impression of universal health care coverage, which the U.S. lacks. That’s up slightly from 52 percent in February.

The COVID-19 pandemic shook the way many Americans viewed health care in their country, said Dr. Ashish Jha, who has directed the Harvard Global Health Institute and is the incoming dean for the Brown University School of Public Health.

“It made people feel our health care system is not nearly as good as we thought it was,” Jha said.

American faith in the U.S. health care system has eroded over the years and how the country approaches solutions, particularly related to health care cost and coverage, “will be [seen] through the prism of this pandemic,” said Joanne Kenen, executive editor for health care at Politico. COVID-19 will drove up the number of uninsured Americans by the millions, Kenen said, and that could drive more ambitious change in health care.

“Things we thought were not possible six months ago might be possible now,” she said.

“Things we thought were not possible six months ago might be possible now.”

The nation’s supply shortages throughout the pandemic — from seeing doctors and nurses resort to wearing garbage bags to protect themselves, to a lack of testing materials that have contributed to long wait times for getting tested and receiving results– has been eye-opening, he said, and forced many in the U.S. to “reflect on what kind of challenges our health system really faces,” he said.

Those pitfalls cropped up despite the fact that Americans have paid far more for their health care for years than nations who have had far greater success controlling the coronavirus.

The U.S. health care system “is the most expensive in the world,” said Alison Galvani, who directs the Yale Center for Infectious Disease Modeling and Analysis. “Despite costing more than anywhere else, we’re not even in the top 30 for important indicators like premature death, neonatal survival and maternal mortality.”

In a July commentary published by The Lancet, Galvani and other researchers studied how the COVID-19 pandemic highlighted flaws in the U.S. health care system compared to other countries. They found that the U.S. system is more expensive, more inefficient, very inequitable and doesn’t cover everyone. “Racial and economic disparities in the US healthcare system are being magnified by the pandemic,” according to the commentary, which added that lower rates of insurance among people of color, paired with higher rates of chronic illness, set Black and brown communities at a disadvantage. The fact, too, that millions of Americans rely on their employers for health insurance also makes the system especially precarious, they said.

According to 2019 data from the Organisation for Economic Co-operation and Development, health care costs made up 17 percent of the U.S. gross domestic product. The next-highest country was Switzerland, with 12.1 percent, where health outcomes are generally much better than in the U.S., including in measures such as infant mortality and life expectancy. According to data from Johns Hopkins University, Switzerland’s deaths per capita linked to COVID-19 as 23.54 per 100,000 deaths. That’s less than half of what the U.S. has reported. 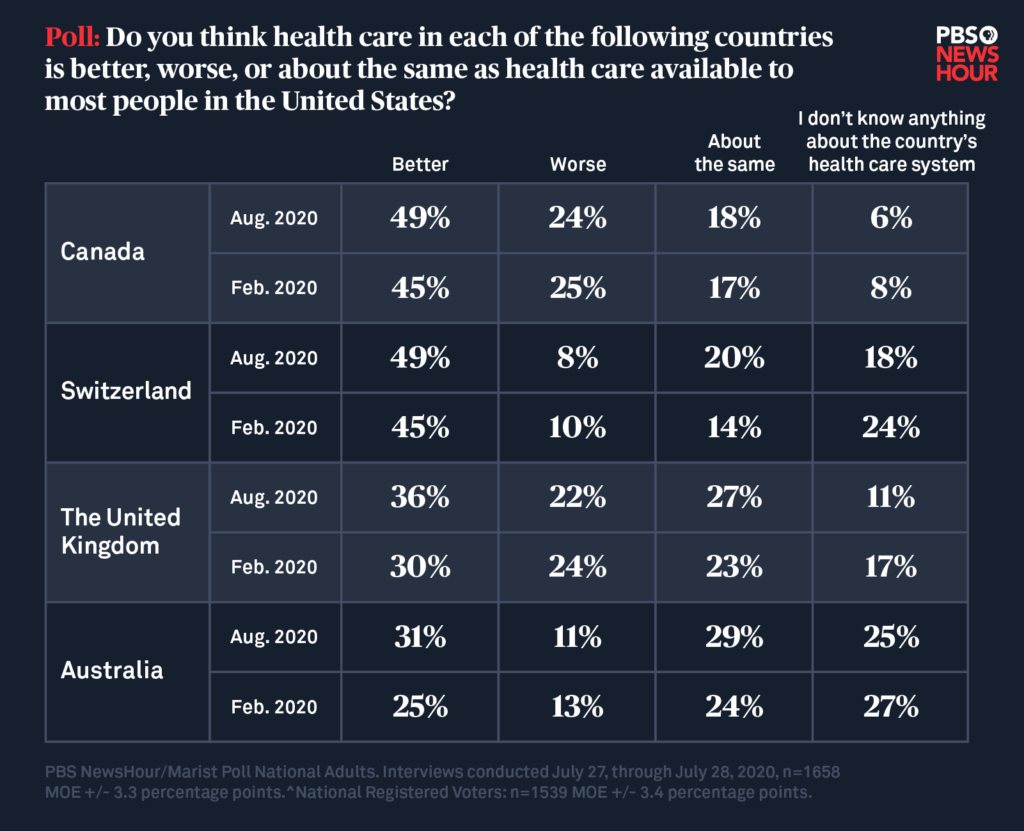 Across the board, American perceptions of health care systems in those other nations have improved significantly since the COVID-19 pandemic began. In each of those countries, cases and deaths began to subside following either cohesive national strategies, universal health care coverage or both.

The U.S. adopted a far more fragmented approach. After most states took individual action to lock down aspects of public life, the Trump administration hurried to offer guidelines for reopening after millions of Americans lost their jobs, forcing states to weigh the health of their economies versus the public health risks. Public health experts warned that the U.S. didn’t have adequate testing capacity or contact tracing infrastructure to justify the risk. Months later, test backlogs still prevent people from getting their test results back in a timely manner and the overall number of tests remains too low in many places to monitor transmission and prevent further outbreaks.

So far, U.S. deaths related to the virus account for one out of five of all COVID-19 global fatalities, and nearly 6 million people in the country have been diagnosed with the viral infection. 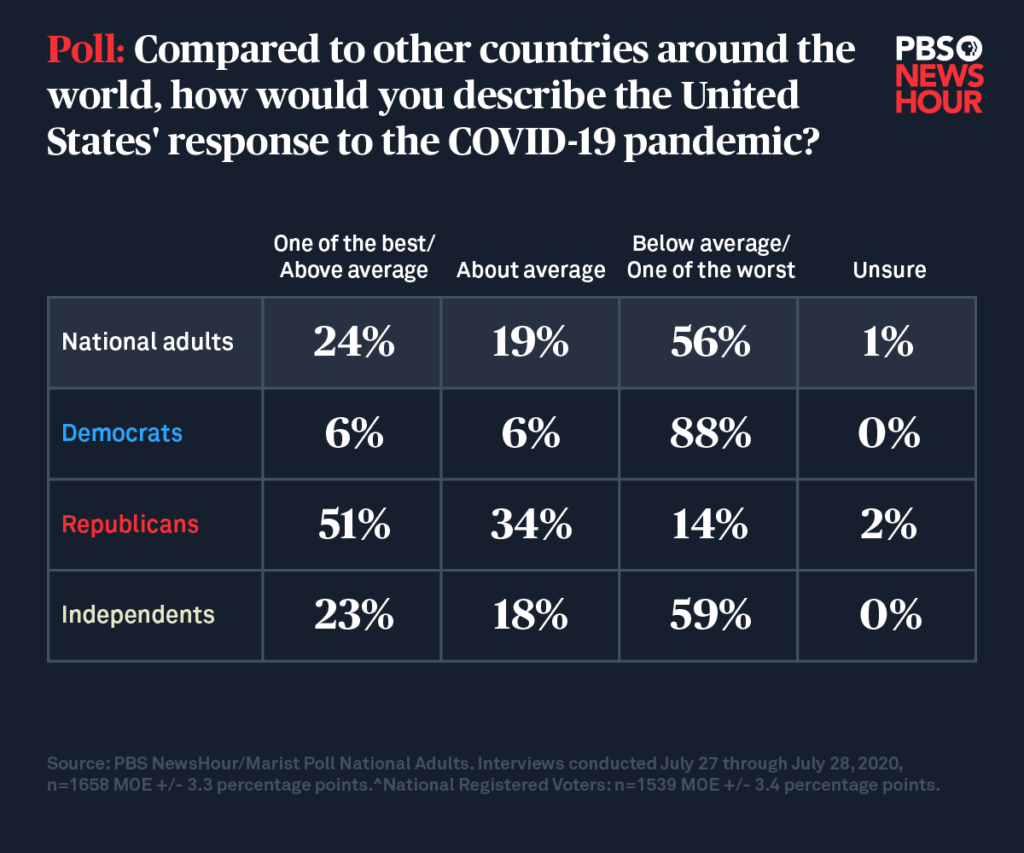 Both in congressional races and on the presidential campaign trail, Democrats want to highlight Republican efforts to repeal Obamacare and pare down coverage for preexisting conditions, said Amy Walter, national editor for The Cook Political Report. That issue performed well for them during the 2018 midterms.

“COVID-19 has only helped to raise the concern on the availability of health care,” Walter said.

Compared to campaign rhetoric between 2010 and 2016, Walter said, Republicans appear more reluctant about talking about scaling back the ACA amid a pandemic. That record could haunt Republicans after they voted in Congress to repeal the ACA in 2017 without a replacement, and as the Trump administration supports state attorneys general in their ongoing Supreme Court fight to unravel Obamacare. A ruling is expected in that case, Texas v. U.S, as early as next year, Walter said.

As a candidate, President Donald Trump is vulnerable when it comes to health care, Walter said. In an Aug. 14 PBS NewsHour/NPR/Marist poll, 53 percent of U.S. adults think former Vice President Joe Biden would better manage the coronavirus pandemic than Trump, while 37 percent think Trump would do a better job.

“COVID-19 has only helped to raise the concern on the availability of health care.”

And despite the fact that Obamacare was a huge Republican talking point between 2010 and 2016, it was rarely mentioned during the last Republican National Convention. Walter said Trump is going to try to diminish concerns about health care, particularly with respect to preserving pre-existing conditions, but that’s very hard to do when his record very publicly suggests otherwise.

For decades, Americans have felt that “our health care system has been broken,” said Barbara Carvalho, who directs the Marist Poll. Expensive prescription drugs, losing or being forced to pay for costlier coverage due to preexisting conditions and being financially ravaged by unforeseen health problems and subsequent bills have driven Americans to ask for change.

That desire for an overhaul was especially true during the push to pass the Affordable Care Act during the Obama administration, Carvalho said. Dissatisfaction among Americans at that time with the health care system is comparable to what polls suggest today, she said. This issue has been important among Democrats, she said, and Biden “could use it to mobilize his constituency” during the final months of the 2020 presidential election.

“It’s very, very important given the current pandemic and the inability of people to get support and have insurance to cover themselves and their families if they get sick,” she said, adding that parts of the ACA that remain particularly popular include parents extending insurance coverage to their children until they reach age 26 and protection for preexisting conditions.

It’s conceivable to think something as dramatic as the COVID-19 pandemic “would change the whole dynamic when it comes to Americans’ impressions of their health care system,” Carvalho said. But so far, “We are looking at a similar dissatisfaction [with health care] and concern about the issues that we have been over time.”

Going back a year to July 2019, 70 percent of Americans said in a PBS NewsHour/NPR/Marist poll that they supported having the choice between Medicare for all who want it or their own private health insurance plan. And roughly half of Americans — 51 percent — said they did not want to repeal Obamacare.

In June of Trump’s first year in office, a slightly smaller number — 60 percent — of Americans said it was a good idea to expand Medicare for all who wanted it, an idea also known as universal health coverage, according to Quinnipiac University polling data. Another 33 percent said it was a bad idea, and an additional 8 percent weren’t sure.

As more people lose their jobs amid a recession fueled by a public health crisis and the Trump administration puts or proposes more limitations on the ACA, Carvalho said it’s important to keep an eye on how these numbers might continue to shift.

In seeing other countries tamp down coronavirus infection rates, Jha said people in the U.S. appear to have developed a “pent-up hunger” for a health care system “that is better equipped, more accessible and with fewer financial constraints and burdens on people,” as other countries have achieved.

Jha sees the poll as “more evidence that there’s going to be a real push for health reform because people are going to demand it.”

But the sharp partisan differences in the responses on America’s handling of the pandemic concern Dr. Leana Wen, an emergency room physician and former Baltimore City commissioner for public health. People who think the U.S. has done a good job so far “may not accept further mask mandates and further social distancing and restrictions on their activities,” she said, despite the guidance of science, data and public health experts.

“It may lead to an even more piecemeal approach to COVID-19 in this country,” Wen said.

Left: FILE PHOTO: Overheated, a health care worker takes a break as people wait in their vehicles in long lines for coronavirus testing in Houston on July 7, 2020. Photo by REUTERS/Callaghan O'Hare